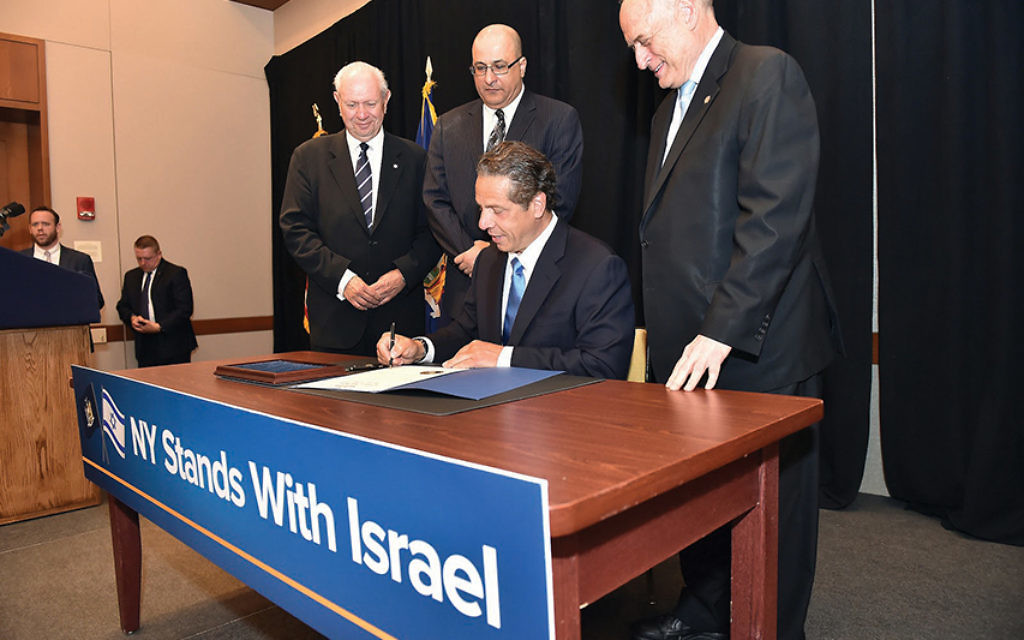 After Gov. Andrew Cuomo signed an executive order Sunday requiring all New York State agencies to divest from companies supporting the Boycott, Divestment and Sanctions (BDS) movement against Israel, Jewish leaders praised the move as having both symbolic and substantive value.

Cuomo signed the order on Sunday, just hours before the start of the annual Celebrate Israel Parade.

Jewish groups roundly applauded the move for making a clear statement of solidarity with Israel, with the Conference of Presidents calling it “groundbreaking,” StandWithUs calling it “a strong message,” UJA-Federation of New York praising it as “historic” and The Israel Project calling it “a powerful demonstration” of the “unshakable bond” that New Yorkers and Israelis share.

“The most powerful figure in the state based on the constitution is the governor, and when he does something it has immediate impact,” said Democratic Party political consultant Hank Sheinkopf. “Obviously it has symbolic impact as well as non-symbolic impact because he does control agencies that purchase goods and services. … The State of New York has tremendous buying power.”

Allen I. Fagin, executive vice president of the Orthodox Union, agreed. “Given the magnitude of the New York State budget and given the enormous investment authority and power that New York State has, in terms of all of the agencies that invest funds, I think New York State has enormous economic power,” he said.

That said, Sheinkopf notes that the order was clearly motivated in part to help Cuomo politically.

“Jews vote, and they vote with great intensity. The 11th commandment is Thou Shalt Vote, 11a is Thou Shalt Vote Democratic, and Andrew Cuomo, by doing what he did, he solidifies the pro-Israel community without question,” he said. “And if he chooses to have a national outlook, he solidifies the pro-Israel evangelicals around the country. So it’s a plus, plus for him.”

The New York Civil Liberties Union was one of several groups to criticize the move on constitutional grounds.

“Whenever the government creates a blacklist based on political views it raises serious First Amendment concerns, and this is no exception. We will be looking very closely at this executive order,” Donna Lieberman, the group’s executive director, said in a statement.

But Marc Stern, general counsel at the global Jewish advocacy group AJC, said the Supreme Court has made clear that such a move is legal.

“What the state can’t do is make it a criminal offense for boycotting Israel — that would be a penalty for speech,” he said. “But the court has held the government doesn’t have to subsidize all speech. It can pick and choose what it wants to be associated with in speaking for itself, as opposed to when it regulates other people’s speech. That’s the line and I think the executive order is firmly on the constitutional side of that.”

In Albany, similar legislation has been introduced in both houses of the New York State Legislature, with the State Senate passing a Republican-sponsored bill in January.

Asserting that “The State of New York will not permit its own investment activity to further the BDS campaign in any way, shape or form, whether directly or indirectly,” Executive Order No. 157 requires the commissioner of the Office of General Services to, within 180 days, come up with a list of businesses and organizations that are engaged in any BDS activity, “either directly or through a parent or subsidiary.” Once the list is completed, all executive-branch agencies are required to divest from any companies on the list.

Not all Jewish groups praised Cuomo for his actions.

Jewish Voice for Peace, a strong proponent of the BDS movement, released a statement defending boycotts as having “long been a tactic of social justice movements to bring about urgently needed change” and criticizing the order as “an anti-democratic executive order to push through a McCarthyite attack on a movement for justice.”

But leaders of several Jewish groups issued statements saying they hoped Cuomo’s executive order would be the first of many.

“I think it was an enormously important, enormously courageous act by the governor that hopefully will serve as an important example to other governors throughout the country,” said Fagin.