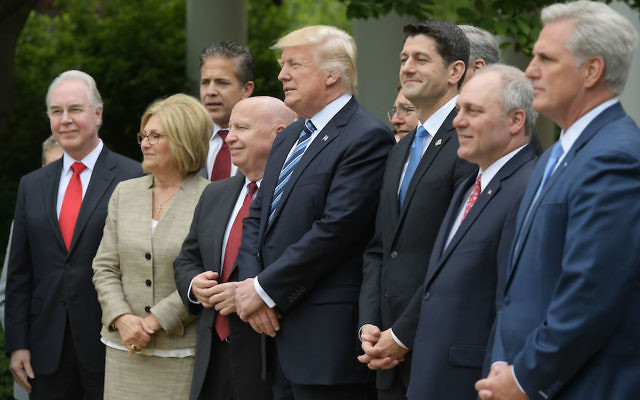 President Donald Trump, center, with House Speaker Paul Ryan, third from right, and other Republican House leaders in the Rose Garden of the White House, May 4, 2017. (Mandel Ngan/AFP/Getty Images)

Jewish groups criticized the passage of a health care bill by the House of Representatives to repeal and replace major parts of the Affordable Care Act.

The bill, backed by Republicans and President Donald Trump, passed Thursday in a 217-213 vote almost entirely along party lines. The measure, which is now headed for the Senate, would nix tax penalties for those without health insurance and decrease state programs to insure low-income Americans expanded by President Barack Obama.

Among those that criticized the passage were the Reform movement, the Jewish Federations of North America, B’nai B’rith International, the National Jewish Democratic Council and Jewish Women International. However, the Republican Jewish Coalition praised the bill as “an important legislative victory for President Trump and Speaker Paul Ryan.”

The Reform movement said it was “deeply disheartened” by the bill’s passage.

“This reverses the tremendous progress that has been made in recent years to increase the number of Americans with health insurance,” Rabbi Jonah Presner, director of the movement’s policy arm, the Religious Action Center, said in a statement. “We urgently call on the Senate to reject this profoundly harmful legislation.”

Jewish Federations said it was “distressed” by the approval.

“We are distressed by the House passage of this legislation that would literally gut Medicaid, which provides an essential safety net for millions of Americans,” William Daroff, director of the umbrella group’s Washington office and its senior vice president for public policy, said in a statement.
“Jewish Federations’ network of health and social service agencies depends on Medicaid to care for the vulnerable who rely upon it.”

“We strongly urge the Senate to reject the House plan, which would have a negative consequence for many communities, including low-income seniors,” the group said in a statement.

The National Jewish Democratic Council called the bill a “catastrophe.”

“We are not surprised, but still extremely disappointed, that President Trump and the Republican leadership decided to go for a short-term win instead of thinking about the millions of lives that they have negatively affected by jamming this bill down our collective throats,” the NJDC said in a statement. “Mark our words — we will ensure that history will not look kindly on the congressmen who voted in favor of the catastrophe known as Trumpcare.”

The Republican Jewish Coalition in its praise said Trump and Ryan, R-Wis., “worked tirelessly for this victory.”

“As the legislation moves to the Senate, we hope for swift passage so President Trump can sign it and fulfill his commitment to the American people for affordable health care,” RJC’s executive director, Matthew Brooks, said in a statement.

Jewish Women International said the the bill “will harm women, families, the elderly and the poor” and called it “a careless, undisciplined effort by the president to make everyone think he is fulfilling a campaign pledge and it will wreak havoc on our nation, including the very people who supported him.”

“This bill is going nowhere fast in the United States Senate,” Schumer, the Jewish Senate minority leader, said in a statement. “Rather than trying to pass a different version of the same Trumpcare bill that would mean higher costs and less care, Senate Republicans should refuse to follow their House colleagues over a cliff, reject repeal, and work with Democrats to improve our health care system in a bipartisan way.”