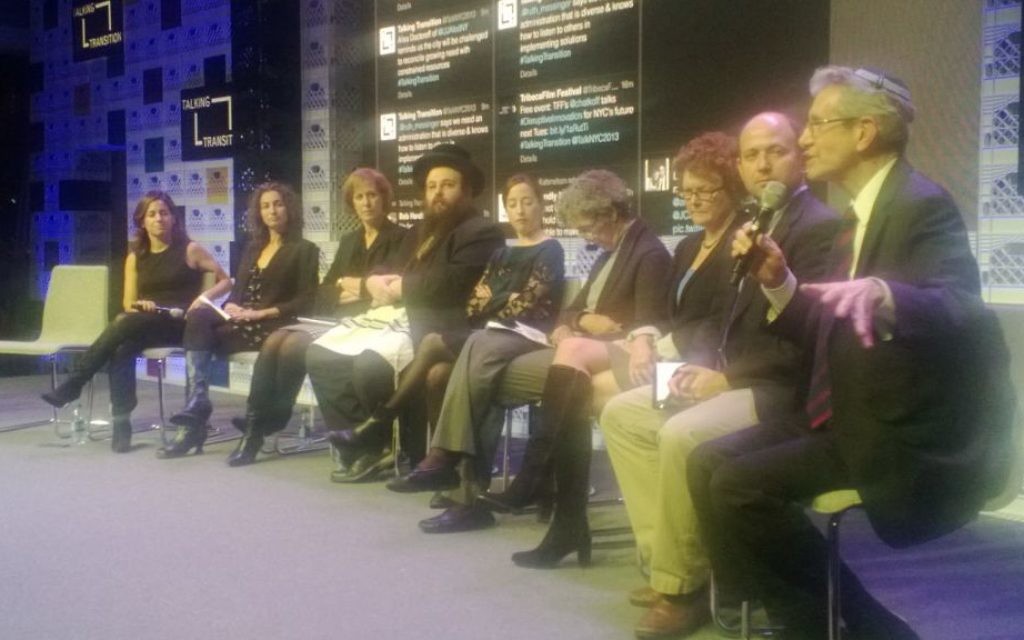 Mayor-elect Bill de Blasio should work with faith leaders and neighborhood groups to find the best way to help the needy in their communities, UJA-Federation’s president said at a public forum on the city’s transition of power Thursday night.

“We believe non-profits, in partnership with synagogues, churches and mosques, are essential building blocks in communities,” said Alisa Doctoroff, noting that the city continued to face unprecedented challenges in fighting poverty and other ills.

“The city will be challenged to reconcile growing need with constrained resources,” said the lay leader of the umbrella organization, which has nearly 100 beneficiary agencies providing services throughout the five boroughs.

“We welcome the new mayor’s recognition of the critical role of neighborhoods as a foundation for all New York City.”

De Blasio, who takes office Jan. 1 after 12 years of the administration of Michael Bloomberg, said during his campaign that he believes the current system of awarding grants to neighborhood institutions through City Council members should be re-evaluated because of its penchant for corruption.

Agencies within UJA-Federation’s networks heavily depend on those grants for programs that could not otherwise function.

Doctoroff did not mention the member-item grant process, but said “We stand ready to partner in new ways with the administration.”

Thursday’s session, “One People, Many Voices,” took place in a temporary structure — dubbed “The Tent” — on downtown Canal Street as part of Talking Transition, a two-week program of events through Nov. 24 funded by 10 private foundations to outline the priorities of New Yorkers and communicate them to the city’s incoming leadership, which includes a new mayor, public advocate and comptroller who will reshape the municipal government.

The session — which literally took on a Jewish flavor with plates full of bagels and lox, gefilte fish and tzimmes as well as a short performance of klezmer music — was sponsored by 32 Jewish organizations and institutions, including The Jewish Week.

It was sparsely attended by only about 50 people, however, including reporters and organizers. Because of the busy schedule at the Tent, speakers were limited to about three minutes, and a question and answer session, as well as the musical performance, were cut short.

Ruth Messinger, a former Manhattan borough president, called on the mayor-elect to recognize the Jewish community’s diversity and to pay attention to its progressive sector.

“It’s important to note that New York City has a homegrown progressive Jewish organization that shares responsibility for some recent legislative victories, such as paid sick leave, that can be an ally to this mayor and some of his initiatives.” She was referring to Jews for Racial and Economic Justice, a sponsor of the event that had a large contingent present.

Messinger, who travels around the world to visit disaster-plagued areas, also called on de Blasio to take a “wiser” approach to responding to catastrophes in other places. Rather than simply urging the public to collect canned goods, she suggested “more sophisticated methods of reaching out … working closely with New Yorkers who come from those parts of the world where disasters strike.”

Most of all, she said, the mayor and his administration should “stay the course” of his campaign agenda and create a big tent in City Hall that understands the city’s diversity. “Put together an administration that is itself hugely diverse and understands how to listen and how to implement policy changes.”

Dava Schub, chief program officer of the JCC of Manhattan, focused her remarks on helping those with disabilities.

“Our goals for them should be no different than our goals for all our children,” she said. “Happy, succesful, independent lives. What that looks like will be different from one person to the next.”

She said the administration must place a priority on job support, educational equity and housing opportunies for the disabled, and suggested setting aside a percentage of public housing for persons with autism spectrum disorders. Schub also said de Blasio himself should hire disabled persons on his staff.

“Lead by example,” she said. “We wll work with you to customize positions in your office. The risk is low and the impact would be huge.”

Michael Miller, executive vice president of the Jewish Community Relations Council, citied his organization’s work in building bridges and said the city must continue to do the same. Noting de Blasio’s campaign theme of “a tale of two cities,” Miller said “the reality is there are more than two cities.”

Anne Polland, vice president for education at the Tenement Museum of the Lower East Side, added a historical perspective, noting that concern about economic disparity in the city is far from new.

“This isn’t the first time these charges have been made against the city of New York,” said Polland. “People talking about change and inequality goes back to the beginning of the 20th century. That progressive spirit arose and brought people from uptown to downtown.”

Noting that the population is estimated at 37 percent immigrant today, Polland said “Going forward we should take inspiration from the many people who felt the plagues of the poor and the immigrants were also their responsibility.