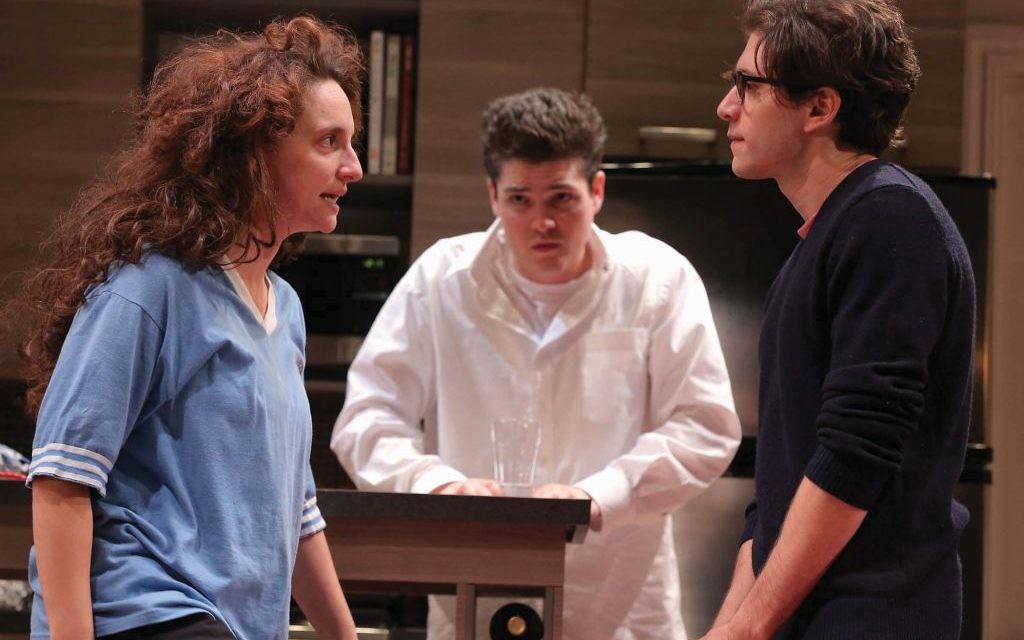 Art provides deeper, more complex pictures of social reality than statistics ever can. The Pew Research Center survey, which has occasioned much hand-wringing, found that a majority of American Jews, despite maintaining pride in their heritage, still marry non-Jews, eschew synagogue membership and perform few traditional Jewish rituals. For those seeking a more nuanced understanding of how disaffection from Jewish religion can coexist with a continuing attachment to Judaism, look no further than Joshua Harmon’s “Bad Jews.” Directed by Daniel Aukin, it is the absorbing, funny and heartbreaking play that is now running in an encore engagement at the Roundabout Theatre’s Laura Pels Theatre.

A sensitive exploration of the conflict between religious and secular ways of being Jewish, “Bad Jews” is also worth seeing for the its razor-sharp comic writing and for the standout performance of its female lead, Tracee Chimo; she plays a 20-something who is intoxicated with Judaism and intolerant of all those who fail to take it as seriously as she does — a lesson, perhaps, for all of us who leap to judgment of our fellow Jews.

“Bad Jews” pits frizzy-haired, rather manic Daphna (Chimo) against her bespectacled, serious-minded cousin, Liam (Michael Zegen) as they gather in a family-owned apartment on the Upper West Side after their grandfather’s funeral. Because he was skiing in Aspen with his blonde girlfriend, Melody (Molly Ranson), Liam has missed the funeral, and this infuriates Daphna, although it does not seem to faze Liam’s taciturn, awkward brother, Jonah (Philip Ettinger), who wants nothing more than to stay out of their conflict.

Yet not taking sides will become, for Jonah as well as for the audience, increasingly difficult. Before long, Daphna and Liam join battle over the grandfather’s chai necklace. Daphna, who announces her plans to make aliyah and marry her Israeli boyfriend, is convinced that the necklace is rightfully hers. But Liam, as the oldest grandson, feels just as entitled to it, and will brook no objection to his bestowing it on Melody as a way of proposing marriage to her.

Essentially a play of ideas, with relatively little action, “Bad Jews” has a Shavian quality — it is the kind of play that George Bernard Shaw, if he were still living, happened to be Jewish, and were angling to work in Hollywood on a TV pilot, might turn out. However, Harmon’s wit is perhaps more of the Sarah Silverman than the Shaw variety; an epigraph to the play’s script is a quote from Silverman: “Am I a Jew? Yes, I’m a Jew. But I’m not, I really have no religion, you know what I mean? I’m just Jewish in that it oozes out of my pores uncontrollably.”

Lack of control — over other people, over our own actions, even over our feelings about Judaism — is a major theme of “Bad Jews.” It is embodied most directly in the character of Daphna, who races back and forth in the tiny pied à terre, tearing at her hair while she insults, cajoles, manipulates and vents her frustration on the other characters. She is an inspired creation, and Chimo plays her with great brio. She looks as if she could have stepped out of a Roz Chast cartoon in The New Yorker, but in her excitement to move to Israel and to study with a vegan female rabbi, Daphne embodies her generation’s simultaneous passion for the exotic and focus on the self as the locus of ultimate meaning.

Liam, for his part, will have none of his cousin’s machinations — he is focused on getting a Ph.D. in Asian studies at the University of Chicago; the playwright describes him in the script as having “as much of a sense of humor as an overdue library book.” Daphne lambasts her cousin for his “uber-liberal” belief that “studying Japan is definitely worthy of five years of intensive labor, but studying Torah for all of 10 minutes is only worthy of total utter snide, sniveling disdain….” But Liam’s perspective is that just being around secular Jews like himself makes her “little Talmudic personality grow in two seconds like those little sponges you put in water,” that she is the “Super Jew” who “lords her newfound and … temporary and potentially passing religious fanaticism over everyone.”

Aukin directs the play with a finely calibrated sense of how cruel young people can be to one another, and how, despite their comfort with the language of psychology, they are often much less self-aware than they believe themselves to be. But he also captures how intensely, and yet how briefly, they can bond with each other; in one memorable scene, when they recount memories of a disastrous family trip to a Japanese restaurant, the characters, all laughing hysterically, find themselves lying helplessly on their backs with only their legs waving in the air visible.

After seeing the play, audience members are asked to post a comment on either side of a bulletin board with, on one side, a quote from Daphna — “I’ll keep it alive, because if I stop, if we all stop, it will be gone. And you can’t get it back. Once it’s gone, it’s gone.” And, on the other, one from Liam — “I’m not going to allow it to dictate how I live my life and who I choose to live my life with so I can genetically or biologically pass on something I don’t even believe in.” And then there is a place in the middle, for those “on the fence.”

I’m still on the fence. But I keep thinking about the title. In a sense, the playwright is saying, these characters are all “bad Jews,” all incapable of separating their own emotional agendas from their religious and cultural identity. But, as the Pew survey has shown us, the only predictable thing about Jews in America is their unpredictability, their resistance to the dictates of religious authorities, and their refusal to be reduced to clearly demarcated religious categories. Perhaps we are all “bad Jews,” or, at any rate, all Jews who insist on our own self-definitions. If, to Daphna, as to many of the demographers, that means that everything is going from bad to worse, Harmon’s scintillating play is here to remind us that the younger generation has its own definitions of Jewish pride, and that Jews in America will continue to develop new and idiosyncratic ways of relating to their tradition.