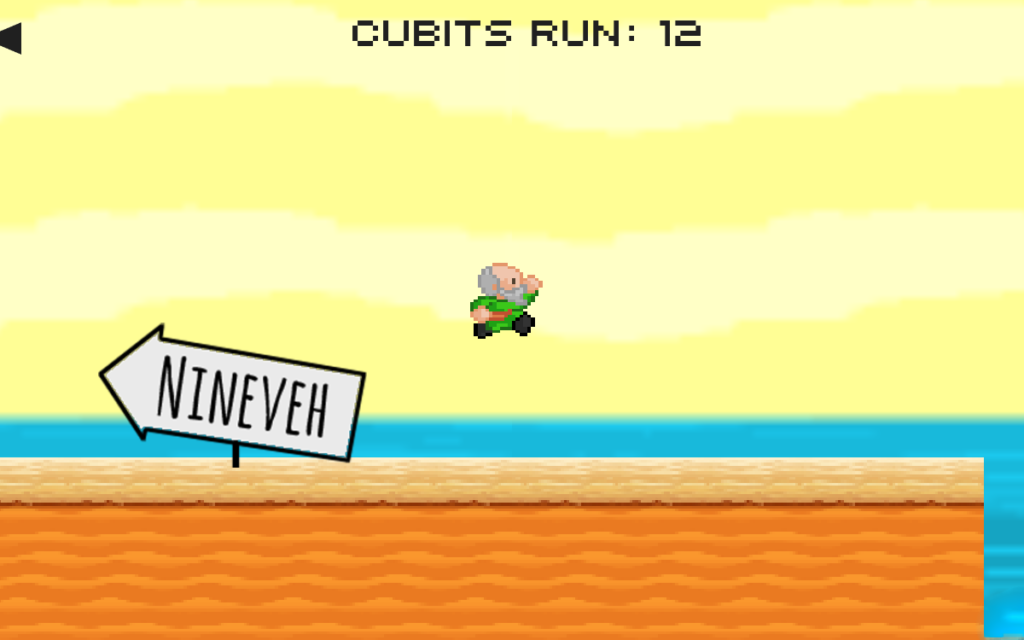 Praying for salvation this Yom Kippur? There’s an app for that.

Jonah Run, a new app designed by G-dcast, a Jewish new media tech company, allows users to jump into the biblical book of Jonah in an unconventional way—by becoming the characters. From the belly of a whale and back, the biblical tale, read during Yom Kippur services, comes alive on screen as players score points by running back and forth as they flee the word of the Lord. The app is currently available for Android and iOS.

“Like any infinite runner, there's no way to actually run away forever no matter how hard you try,” said developer Russel Neiss, who created the app to give synagogue-goers a new way to interact with the text. “We wanted to try and reinforce the idea of teshuvah (repentance) on Yom Kippur—it’s about being faced with the same situation that caused you to sin in the first place, but not giving in.”

Neiss developed the app after upper elementary and middle school students articulated a love of infinite runner style apps, including Temple Run, Jetpack and Joyride, Neiss said. He worked with G-dcast executive director Sarah Lefton to create an app with the same appeal, plus Jewish content. The story of Jonah, apropos for the High Holidays, fit the bill.

“We began spit-balling ideas and Jewish texts that might fit, until we finally realized that the quintessential story of attempting to run away and failing to ever be able to do so was Jonah,” he said.

Though running gains a user points, only through engaging in repentance can the user win the virtual game, Neiss explained.

This isn’t Neiss’ first time at the Jewish app rodeo. To date, he’s created 20 apps with diverse Jewish themes, including Let's Bake Challah, Exodus, and PocketTorah. He’s also in the process of developing projects for other clients, including a Megillat Esther App for the Jewish Orthodox Feminist Alliance. Every now and then, when he gets “bored or annoyed,” Neiss writes a Jewish themed Twitterbot, a program used to produce automated posts on the social media platform Twitter.

Jonah Run’s target audience is middle-schoolers and teens, but adults have shown an explicit interest in the app, Neiss said. Tests show that “older folks, while intrigued, have a harder time with running 50 or so cubits.”

The app does its best to stay true to the actual text of the book of Jonah, but Neiss has reserved space for some “snarky commentary.”

“Jonah knows that he can't actually successfully run away, much like most players of the game know they can't actually 'win' an infinite runner,” he said. “And yet, we still play, again and again and again. Jonah ran away, survived a tempest, and 3 days in the belly of a fish before he decided to turn around and repent.

Though the worst thing that can happen to players is an increased number of 'unsuccessful runs,’ often increasing to comical levels, Neiss hopes the underlying theme of Yom Kippur comes across: the ability to turn around.

“In the game, and in life, you can always turn back and reconsider the approach you've previously taken,” he said. “That’s an important value, especially at this time of the Jewish year.”