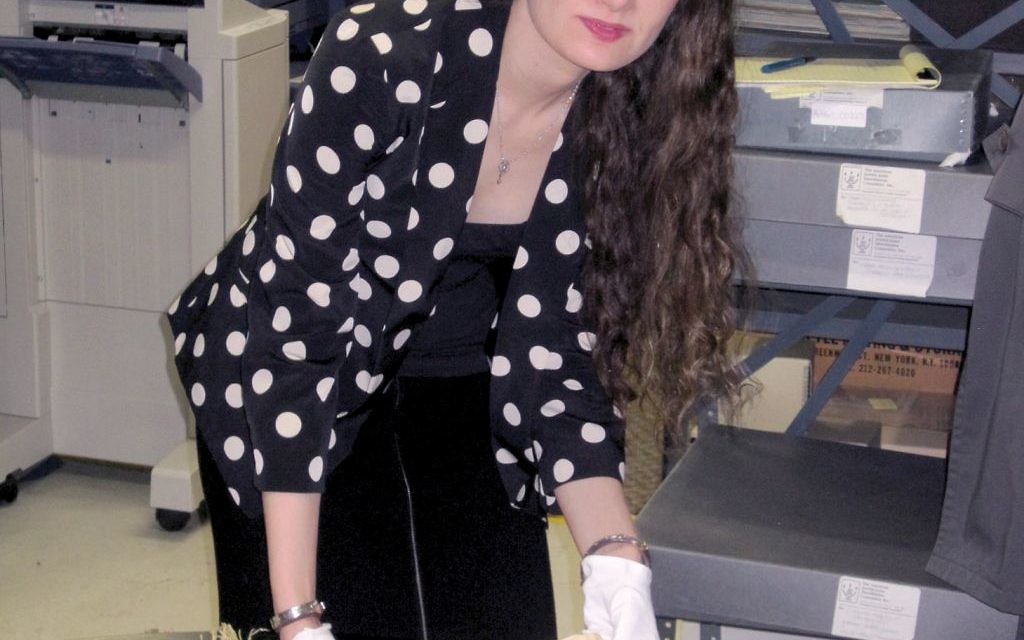 For several years in the 1920s, Rabbi I. M. Kowalsky worked as an administrator and social worker back in Europe for the American Jewish Joint Distribution Committee. A Jewish native of Poland who came to the United States with his family at the turn of the 20th century, and later served as an itinerant spiritual leader in the tri-state area, he was pictured in several old JDC photos, but no one had identified him.

For the past three decades, a small tallit that Josef Friedman, a German-born survivor of the Holocaust, had received from the JDC in a displaced persons camp, brought with him to the U.S. in 1947 and prayed in until he died in 1987 largely remained in its original, tattered black velvet case.

It was used only occasionally by his son, Steven, who has his own tallit. Steven Friedman, who lives in Plainview, L.I., recently donated his father’s tallit to the JDC.

Both the identification of Rabbi Kowalsky’s pictures and the donation of Josef Friedman’s tallit are the result of a campaign that the archives of the 102-year-old overseas arm of the U.S. Jewish community began recently, to upgrade and expand its already extensive collection of artifacts.

The Global Archives (archives.jdc.org), much of whose archival material is housed in a storage facility in Long Island City, put out a call for people whose families have a connection to the JDC — popularly called “the Joint” — to identify relatives’ photographs and to donate materials. And the archive, in the middle of a long-term project to microfilm and digitize its historic documents, recently put online many new holdings of AgroJoint (a onetime JDC project that established agricultural colonies and industrial schools in Ukraine and Crimea), and announced the establishment of two new fellowships for scholars conducting advanced study in 20th-century Jewish history or related areas.

New items in the JDC historical collection include soccer medals from a JDC-supported inter-camp sports league in DP camps, a uniform worn by a JDC staff member in DP camps, and a letter sent to promote attendance at a 1939 meeting that was to discuss the dire situation of Jews in Europe, said Michael Geller, a JDC spokesman.

Also, Geller added, “Family researchers of all kinds are reaching out for information” about relatives.

The new developments are designed to improve the quality and quantity of resources available to anyone interested in Jewish history of the last century, a boon to scholars and to people doing family genealogical research. The new items, and new photo identifications, “will fill in the blanks” of the archives’ documentation of 20th-century and early 21st-century international Jewish life, said Linda Levi, archives director.

“The artifacts bring history to life,” Levi said last week, sitting in one of three large “vaults” — climate-controlled rooms — that the JDC rents in Long Island City to store its material. “This is really living Jewish history.”

One sign of the archives’ contemporary relevance: Many items in the collection went on display at the New-York Historical Society in a 2014 exhibition, “I Live. Send Help,” which marked the JDC’s 100th anniversary.

The JDC was formed in 1914 to serve the humanitarian needs of Jews in Europe and Palestine at the start of World War I. It now operates in 70 countries on five continents.

The Global Archive reflects all of this. Its collection of more than three miles of text documents (if laid end-to-end), 100,000 photographs, 1,000 audio recordings, 1,300 video recordings, and assorted items including rare books and posters and old movies and documentaries, offer a snapshot of persecution and rescue, humanitarian outreach and political lobbying, old men at prayer and young children in school.

The collection is housed in Fortress New York, a sprawling, free-standing, two-story yellow brick building on a block between a plumbers union and a parking garage, is the home to the valuable belongings of more than 100 institutions and individuals that require a climate-controlled environment, said CEO Thomas Burns. The building has virtually no windows; sunlight can be harmful to old items. The building has a generator, in case of a power blackout and its own drainage system, he said.

The JDC, whose archival holdings had outgrown its Manhattan headquarters, has been in the Fortress since 2008. One of the building’s largest renters, its three vaults total 2,250 square feet of the site’s more than 100,000.

The JDC staffers who work in the trio of rooms sort through materials that often arrive “not in pristine condition” and in a disorganized fashion, in jumbled cardboard boxes, said Tamar Zeffren, archival collection manager. She points to a box on one shelf that holds century-old records. “It’s a box with a hundred years of stories in it.”

Zeffren and her colleagues organize everything that comes in, putting it in specialized, acid-free folders and boxes that retard deterioration. For them, history takes on a human face. Every day they review letters and photographs that tell personal, often poignant stories. “You can’t help getting choked up,” said Rebecca Weintraub, who recently has been working with records of the airlifts from Ethiopia that the Joint helped coordinate in 1984 and 1991.

The contents of the archive are used each year, according to the agency, by tens of thousands of filmmakers, journalists, Holocaust survivors and the general public.

“It certainly makes research easier … to a new, wider audience,” said Avinoam Patt, professor of modern Jewish history at the University of Hartford, who has used the JDC archives for his research. He is now editing a scholarly volume about the Joint’s history.

Patt, in a telephone interview, called the archives “one of the most important collections out there for us to understand the last 100 years of Jewish history in a global sense.” The archives’ leaders, he said, “made a conscious decision to make it more easily available.”

Like Steven Friedman, who donated his father’s tallit, and Leslee Kowalsky Sack, a Brooklyn-born resident of Canada’s Prince Edward Island who identified her grandfather’s photos, the people who are contributing to the JDC archives are increasingly members of the second and third generations, the children and grandchildren of people who had an original connection to JDC activities.

The Friedman tallit, white with black stripes, is tattered from years of use. Stitched along one side, in black thread, are the words “gift from Joint.”

After Rabbi Friedman died, his son, a semi-retired Judaic studies teacher, gave some of his belongings to the Museum of Jewish Heritage – A Living Memorial to the Holocaust, in Battery Park City. A Museum curator, noticing the JDC mark of identification on the tallit, suggested that it should go to the Joint’s archives. Friedman agreed. “It’s an important symbol … a very powerful symbol … it survived [the Holocaust].

Kowalsky Sack, a retired travel agent, said she has been doing family roots research for about 15 years. “It’s important to know where you come from,” she said.

In past years, she has turned to the JDC archives to find out more details about her grandfather who died, when she was 5, in 1952 at the age of 62 in Israel. Last week she went through more old photographs on the archives’ website. Suddenly, she noticed a familiar face. “That’s my grandfather,” she declared. She added the identification to the website; one less anonymous person.

In future weeks, Kowalsky Sack said, she will return to the archives’ website, and look for more photos of her grandfather. “I don’t give up.”