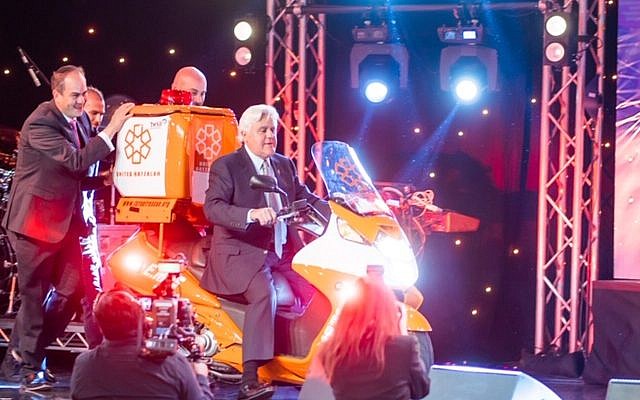 “Blessed are you, Lord our God, who has given wisdom to his flesh and blood.”

We recited this Jewish blessing, which is made upon observing a wise gentile, at a recent United Hatzalah gala in Los Angeles.

The inspiration was Jay Leno.

United Hatzalah is the Israeli volunteer first response system that enables victims to be treated in the few minutes that can separate life from death — generally well before an ambulance arrives.  The organization says it is able to save around 100 lives a day, and its network of 5,000 volunteers embodies the full spectrum of Israeli society (Jews of all kinds, Muslims, Christians, men and women) — all working together in service of what all believe is sacred: life.

Leno, who is not Jewish, learned about United Hatzalah a couple of years ago.  The fundamental transportation device for United Hatzalah is the ambucycle — a motorcycle that can go quickly through traffic with everything on it necessary to save a life.  Leno has regularly welcomed groups of United Hatzalah supporters to his home to tour his legendary motorcycle and automobile collection with him.

Last Thursday night at the LA gala, Leno accepted the United Hatzalah Humanitarian Award and delivered a comedy routine, explaining how he, kind of by mistake, got his start doing comedy to an Orthodox Jewish audience in the Catskills.  His routine touched on his parents, the connections between Jews and Italians, Jewish parenthood — and much more, and had the crowd roaring.

When the pledging started, Leno took the microphone from the MC and made a generous donation himself — “in memory of some jokes that died,” and congratulated and thanked others who also gave.  He later took the microphone again and said he would conduct tours of his garage for anyone, anytime, who made a generous donation — and hundreds of thousands of more dollars were raised.  And this was all in the context of his great affection for Israel and the Jewish people — which he spoke of movingly, directly and through his actions.

The result?  With Leno’s inspiration and help, United Hatzalah raised millions of dollars.  The significance of this is evident when one considers that United Hatzalah saves a life in Israel with every $490 donated— and that does not account for the brain damage, birth complications and psychological discomfort that the fast response of United Hatzalah prevents.

Rabbi Akiva taught that the greatest principle of the Torah is: Love one’s neighbor as one’s self.  Jay Leno embodied that principle at the event and gave us all a reason to bless him for his gift to elevate others as well.

Mark Gerson is a New York businessman and chair of United Hatzalah. David Wolpe is the rabbi of Sinai Temple in Los Angeles and a Jewish Week columnist.