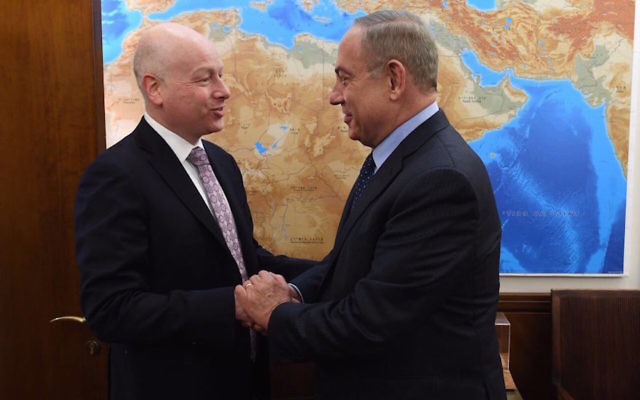 WASHINGTON (JTA) — Jason Greenblatt, President Donald Trump’s special envoy for international relations, is headed to Israel in a bid to help reduce tensions as Jerusalem’s Temple Mount remains a flashpoint and after a Palestinian terrorist killed three Israelis from the same family in a West Bank stabbing attack.

“President Trump and his administration are closely following unfolding events in the region,” a senior administration official told JTA on Sunday night, speaking on condition of anonymity and reporting Greenblatt’s departure.

“The United States utterly condemns the recent terrorist violence, including the horrific attack Friday night that killed three people at their Shabbat dinner table in Halamish, and sends condolences to the families of the innocent victims,” the official said. “We are engaged in discussions with the relevant parties and are committed to finding a resolution to the ongoing security issues.”

Greenblatt would closely coordinate with the National Security Council and with Jared Kushner, Trump’s son-in-law who is a top aide and is charged with renewing Israeli-Palestinian peace talks, the official said.

Yosef Salomon, 70, and his children Chaya, 46, and Elad, 36, were killed by a 19-year-old Palestinian attacker from a nearby village who entered the home in the Halamish settlement and began stabbing the family members. They had gathered at the Salomon home to celebrate the birth of a baby to another of the senior Salomon’s sons. His wife, Tovah, 68, was injured in the attack.

Thousands attended the funerals on Sunday afternoon at the cemetery in the central Israeli city of Modiin.

The area around the Temple Mount, the holiest site in Judaism and also the location of the Haram A-Sharif, the third holiest site in Islam, has been riven with tensions since July 14 when three Arab-Israelis shot and killed two Israeli police officers at the holy site before they were shot to death.

Israeli authorities installed metal detectors at the site in the wake of the attack and since then, Muslims have refused to enter the Temple Mount, instead praying outside of its gates, leading to clashes and the deaths of at least five Palestinians in recent days.