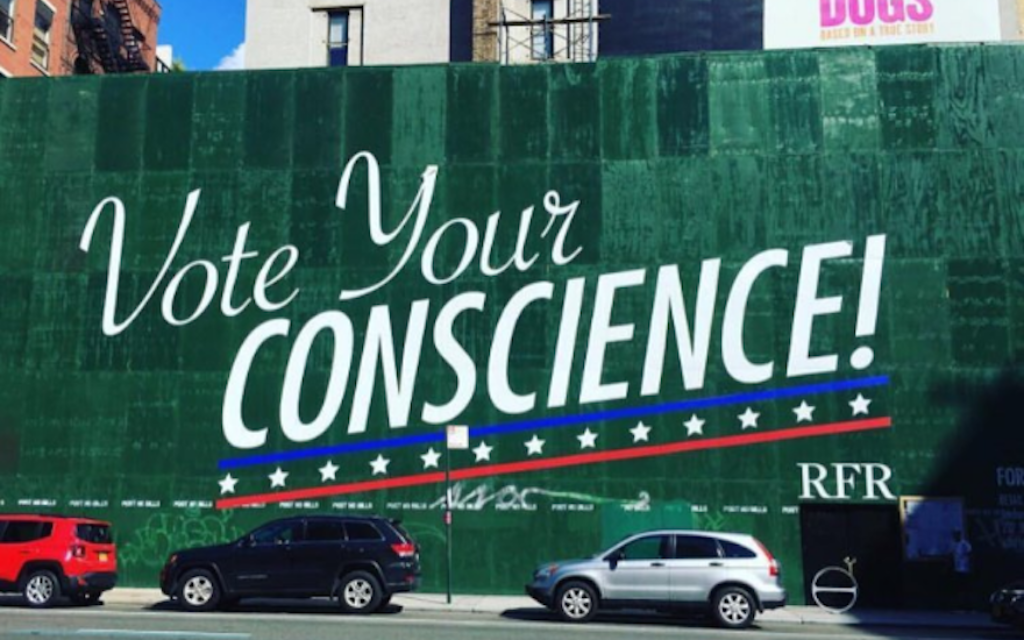 (JTA) — Jared Kushner’s sometime partner in real estate has erected a billboard at a Manhattan construction site with a message many see as a political dig at Kushner’s father-in-law, Donald Trump.

The slogan, famously uttered by the Republican presidential nominee’s rival, Texas Sen. Ted Cruz, at the Republican National Convention, has become closely associated with Republicans who will not vote for Trump. On Monday, Rosen’s Instagram featured a photo of the billboard with the caption “Wake up America,” according to Gawker.

Kushner, a developer who has partnered with Rosen on a number of real estate deals, is married to Trump’s daughter Ivanka. He and Rosen both have family ties to the Holocaust: Kushner is the grandson of Holocaust survivors, and Rosen is the German-born son of survivors.

Rosen has contributed to a number of Democratic candidates and committees over the years, according to Gawker. In 2010, he clashed with a Hasidic Jewish group that claimed that one of his projects in Jaffa, Israel, was being built on the site of an ancient Jewish graveyard. The hotel opened in 2015.

Earlier this year, Rosen and Kushner were reported to be in talks to purchase the Jehovah’s Witnesses world headquarters in Brooklyn, but the deal closed Aug. 4 without Rosen’s involvement, the New York Post reported.

Gawker noted that the logo of Rosen’s company, RFR Holding LLC, is “displayed prominently” next to the billboard at 337 Lafayette St. — “just a block north of the Puck Building, Kushner’s flagship property.”