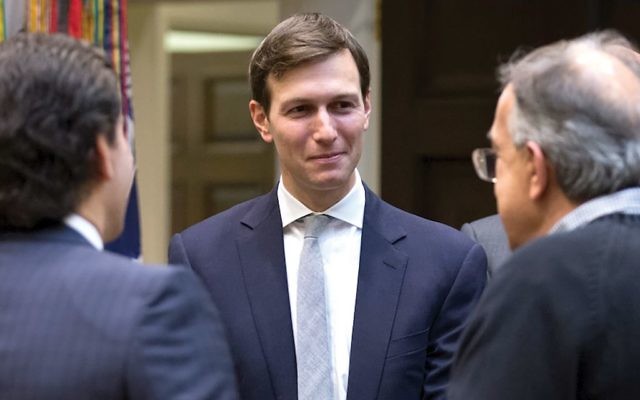 Jared Kushner’s voice, heard this week when he gave a speech kicking off Technology Week at the White House, came in for some ribbing. Getty Images

Jared Kushner has given his first public speech since he became senior aide in charge of everything for President Donald Trump.

And it was about as bland, scripted and New Jersey-inflected as we expected.

Kushner’s speech Monday — two days before he was expected to arrive in Israel to meet with Israeli and Palestinian leaders as the president’s point man on Mideast peace — kicked off Technology Week at the White House — it presumably doesn’t focus on how to set up backchannel communications with Russia. Instead, Kushner gave a seven-minute address on improving government efficiency that included plenty of buzzy words like “bureaucracy,” “forms,” “cloud,” “interagency” and “optimization.”

“Together we have set ambitious goals and assembled interagency teams to tackle our objectives,” he said. “It’s working and it’s very exciting.”

It was not very exciting. It was supposed to be a boring speech, and it was. But because Kushner said it out loud — with Jersey vowels (“awwditing”) in a nasal, midrange voice — the Internet is obsessed.

Writes one scribe, Jezebel managing editor Joanna Rothkopf, “And what a voice it is!!! Listen to the first several notes, flat and nasal like the Oboe/duck in Peter and the Wolf, or a little league baseball game in Mamaroneck, New York. Close your eyes and let the sunken dipthong of “awditing” and the wide, fertile middle of “majahrity” wash over you like the northern part of the Hudson River.

The obsession with Kushner’s voice — or, more to the point, the absence of his voice — is an avatar for his overall mysteriousness. As John Oliver pointed out recently in a viral smackdown, we don’t know much about what Kushner believes, what his priorities are or how his experience as a real estate developer qualifies him to, say, solve the opioid epidemic while also achieving Mideast peace.

For the record, JTA had a video of Kushner speaking publicly before it was cool. That speech, from a 22-year-old Kushner in 2003 dedicating Harvard’s new Chabad center, includes a heartwarming anecdote about chicken soup.

Kushner’s White House speech included anecdotes about government compliance. Still, it also included a couple of zingers: For example, he pointed to government technology being so outdated that “the Department of Defense still uses eight-inch floppy disks.”

As close as he may be to his father-in-law, Kushner is his polar opposite as a public speaker — his tone remained even, he didn’t go off script. In fact, he barely cracked a smile.

But at least everyone now knows he doesn’t sound like Gilbert Gottfried.