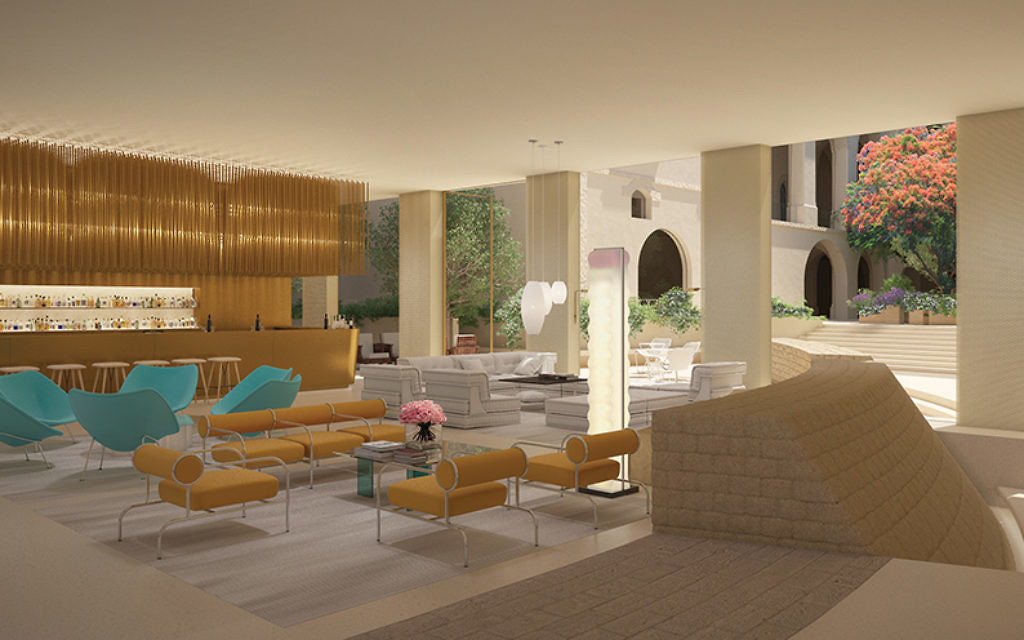 Jaffa, the ancient port city, is witnessing an explosion in demand for luxury housing and hotel accommodations.

Steeped in layer after layer of history, Jaffa has long been on the itineraries of diaspora Jewish travelers, who enjoy its stunning port and its boutiques and cafés. But now, it is also an increasingly popular choice for vacations and second homes.

One of the most ambitious attempts to cater to the high-end market in the city where the biblical Jonah set sail, where the cedars arrived for the First Temple and where many thousands of Jews arrived to settle the Promised Land in modern times, is in full swing at an old Christian complex.

The adjacent structures, which once housed the former School of the Sisterhood of St. Joseph and a 19th-century French hospital are being converted, so to speak, into an ode to modern luxury. As they are transformed into a hotel and apartment complex, many original features are being preserved and repurposed.

“Within the building we have an amazing chapel that became completely dilapidated and we have spent a lot of effort and money trying to restore its grandeur,” said architect Ramy Gill excitedly, explaining that it will become a music room with a bar for hotel guests and residents.

Next to the old building, a new building is being constructed, which will be very different in style and which Gill said represents “the signature of our generation.”

“You will see the 19th century brought back to its glorious days and the second building, which is a 21st-century building,” he said.

Once finished, the complex will be part of the W Hotels collection, which has 43 hotels and retreats worldwide, as well as home to 34 apartments in a wing to be known as The Residences at W Tel Aviv-Jaffa. There, homeowners will be able to use the facilities of the hotel, and order all hotel services, including maid assistance and room service.

Gill first started working on transforming the Christian complex into a luxury development some 20 years ago. The man who finally provided the necessary capital is the New York real estate tycoon Aby Rosen, who is behind the project through RFR Holding, which he co-founded. RFR is working on the project with Starwood Hotels and Resorts Worldwide.

Through the starts and stops in the project Gill has maintained a strong enthusiasm for the challenge — and has translated it to reality working with British architect John Pawson.

The architects have managed to expand the area of the original buildings by enlarging them downwards. “The original building was built in 1879 and has two grand floors,” Gill explained. “We were then allowed to dig in to the lower areas and have all the public facilities, like the restaurants, in the walk-out basement that spills out in to the large courtyard.”

The homes will feature floor-to-ceiling windows and hand-finished hardwood floors. Details include marble stonework and upscale Duravit fixtures in the bathrooms and stainless-steel Miele appliances in the kitchens designed by Mr. Pawson. But the high-end approach extends beyond the homes to communal areas and even the parking garage.

“We’re building a totally automatic parking garage for 245 cars,” Gill said. “You drive into an entry like a driveway and put your car in a cabinet that is actually an elevator and say goodbye to the car, which is automatically parked.” When drivers want their cars back, they can just call the parking system from their cell phones. Gill calls the system “mind boggling” to watch.

Despite all the modern conveniences and his design, Gill is at his most enthusiastic when talking about Jaffa, a city for which he enthusiastically provides an overview of 4,000 years of history and discusses numerous visitor sites and the time-travel experience they provide. “How many places on earth do you have this kind of experience?” he said. ◆