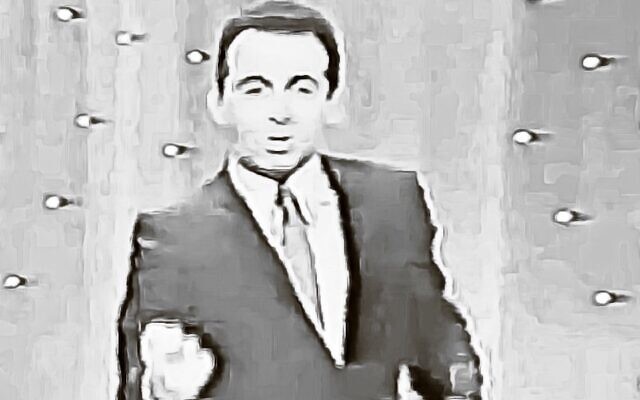 My late father couldn’t stand Jackie Mason. Dad grew up in upstate New York, the youngest member of the only Jewish family in town. Like any normal kid, he was desperate to fit in, and being Jewish was what kept him apart. Mason represented all that my father tried to suppress: the Jewy accent, the Yiddish rhythms, the Borscht Belt shtick.

Mason knew he had this effect on other Jews. “The only persecution that I ever suffered from in my career was from Jews that are embarrassed that I am so Jewish,” he said in one routine.

Mason’s career soared on the strength of his brand of ethnic humor – and it groaned under the weight of it. He was a brilliant practitioner of his craft, expertly building and delivering a joke and playing an audience for all they were worth. His best material was trenchant, sometimes even wise.

But Mason owed the rise, fall and rise of his career to his audience’s perceptions of his Jewishness. In the Borscht Belt, in front of Jewish vacationers, he was in friendly territory. But as he pushed into the mainstream, some urged him to tone it down. “There was a profound rejection problem: the reverse discrimination of Jews against other Jews who talk like me in show business,” he said in an insightful interview from 1988. “I think they were ashamed and embarrassed about my accent, that I was somehow symbolic of the whole fear that Jews would be discriminated against again.”

He was talking about the 1950s and ‘60s, when American Jews felt both vulnerable and increasingly at home. In the wake of the Holocaust, antisemitism was largely discredited and Jews were welcomed into the mainstream. But certain rules applied: You could be Jewish, but not too Jewish. It’s not like ethnic humor wasn’t in vogue – it’s just that few channeled it as aggressively as Mason. Henny Youngman, Rodney Dangerfield, Alan King, Norm Crosby – the Borscht Belt comics who “crossed over” were Jewish. Jackie Mason was a Jew.And his career tanked.

But something happened in the 1980s. Speakers of Yiddish-inflected English began dying off. Jewish ethnicity was fading, which only led people to long for it. Mason got this too. “We take our heritage with us, wherever we come from,” he said. “But in America, people have tried to assimilate. And now they feel they are missing something about their culture. People need these characteristics to know who they are, and they want to distinguish themselves from other people’s ethnic differences. I think there is a certain degree of re-identification with their ethnic identities, and it gives them something, emotionally and spiritually.”

What he gave them was “The World According to Me!,” a one-man show that opened on Broadway in 1986. Its best-known bits are built on distinctions between Jews and gentiles. Gentiles take blue collar jobs, Jews aspire to the professions. Jews are sober, gentiles drink. Gentiles work with their hands, Jews are hopeless with tools. “Go to any gentile home and you’ll see the truth of it. A gentile home is a workshop and a Jewish home is a museum.”

Although his fellow Jews were as much a target of these jokes as their gentile foils, audiences ate it up. If Mason wasn’t describing them, he was describing their uncles, or parents, or neighbors, often as precisely as a sociologist. (JTA has a roundup of his routines about Jews.)

Some of this was cringe-worthy, but – honestly? To the audiences that helped the show run for two years and fed numerous sequels, his observations rang true. As he said, after decades of suppressing what made them different and sensing what was being lost, Jewish audiences wanted to hear what made them distinctive.

Ethnic humor is tricky, never more so than now. Humor thrives on generalization and provocation, when both are out of vogue.

Ethnic humor is tricky, never more so than now. Humor thrives on generalization and provocation, when both are out of vogue. It’s not just a matter of “punching up” or down. As a society we have learned to celebrate diversity but are wary about embracing distinctions. The terms of the debate over intermarriage, for example, have changed drastically in the past 50 years. Baby Boomers and Gen X weren’t about to sit shiva for a child who “married out,” as their parents or grandparents might have threatened. But many did want their children to appreciate what made Jews and Judaism distinct and special and urged them to carry it on. Their children, in turn, find the whole idea of in-marriage more than distasteful, and perhaps a little racist.

Jackie Mason’s late-career success straddled these generational divides, and his star faded again when audiences were no longer eager to look back at where they had come from. Mason found what his New York Times obituary diplomatically called “a new sideline as an opinionated political commentator” – in fact, he turned into a crank, embracing the uglier sides of right-wing populism that his friend Donald Trump rode into the White House. (A Trump speech is itself like a Borscht Belt routine, stripped of anything resembling wit.) Mason used the Yiddish S-word to describe David N. Dinkins, the Black mayoral candidate, apologized, then did it again to belittle Barack Obama. His sour politics and blatant racism reflected badly on his old routines, and once amusing bits about women and Puerto Ricans began to curdle.

But for a good stretch the rabbi-turned-comedian told and embodied an important Jewish story, about who we were, who we are, and what we were becoming. Like any great artist, his work deserves to be appreciated, even when it stops being admired.