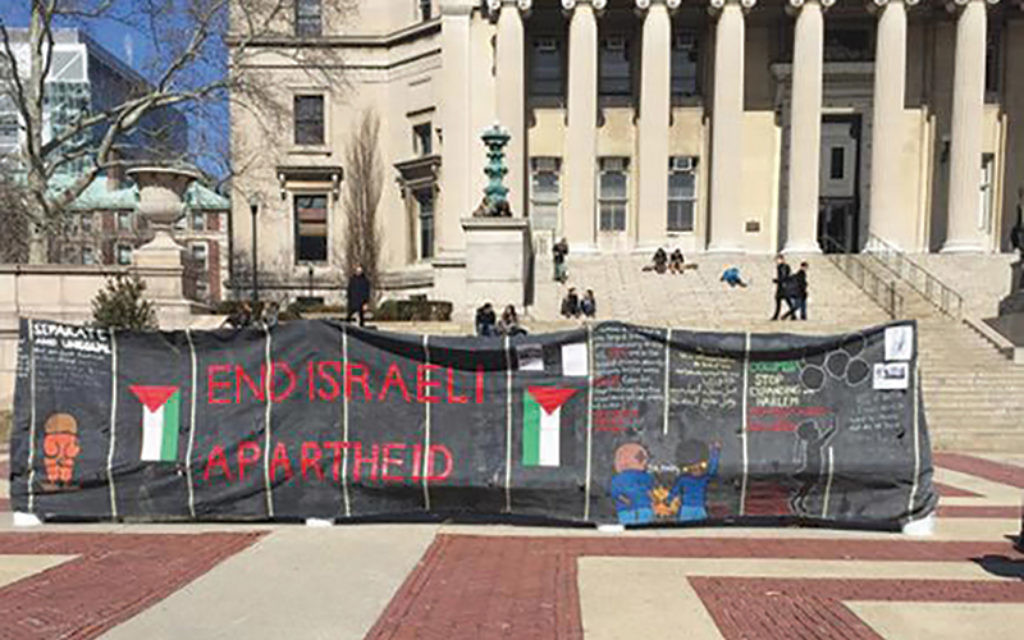 Since its founding in 2008, J Street, the “pro-Israel, pro-peace” lobby, has been unabashedly critical of Israel’s continuing occupation of the West Bank and east Jerusalem, and many in the mainstream Jewish community treated the group as a pariah.

Israel’s ambassador to the United States, Michael Oren, rejected an invitation to speak at J Street’s annual conference in 2009. In 2014, the 51-member Conference of Presidents of Major American Jewish Organizations rejected J Street’s application for membership by a vote of 22 to 17 with three abstentions.

But as its support base has steadily increased — the group boasts180,000 supporters nationwide — so has its acceptance in the mainstream Jewish community here, and in Israel. Last week, Israeli officials reached out to enlist the group’s help in combatting attempts to delegitimize the state through the BDS (Boycott, Divestment and Sanctions) movement. In so doing, it was taking a page from the Reut Institute, a major Israeli think tank, which had suggested in a 2010 report that the liberal Jewish community be recruited to help fight BDS.

Gilad Erdan, Israel’s minister for strategic affairs, who heads the state’s efforts to fight BDS, told the Herzliya Conference in Israel last week that he had met with Yael Patir, J Street’s representative in Israel, to discuss working together against BDS on college campuses.

“It is important to understand that in this battle there is no right or left, hawks or doves,” Erdan was quoted by the Israeli newspaper Haaretz as telling the audience. “This battle requires cooperation between the government and civil society, both in Israel and abroad. I recently returned from a visit to the U.S., where I met people who predominantly support Israel, but many of whom also have serious questions about Israel’s policies — including students and leading university faculty, leaders from the African-American, Hispanic and Asian communities.”

J Street spokeswoman Jessica Rosenblum said Erdan and Patir had a “substantive exchange of views on BDS and ways to combat it.”

She said Erdan expressed interest in meeting with J Street’s president, Jeremy Ben-Ami, “because we have a shared goal of combatting BDS.” But she said no meeting has been set up and that there is “no plan for an active partnership,” but rather only the “hope that there will be an ongoing conversation.”

Gidi Grinstein, founder of the Reut Institute, followed Erdan to the podium last week and stressed the importance of meeting with J Street, reportedly saying: “Anyone who can’t meet with J Street can’t be helpful in fighting anti-Israel delegitimization.”

In an interview with The Jewish Week, Grinstein explained that liberal, progressive Jewish groups that may be critical of Israel but support its right to exist are the best ones to fight delegitimization efforts.

Grinstein added that the Reut Institute is working with the Anti-Defamation League to update its 2010 report. He expects the project to be completed by the end of the summer.

“We see it on college campuses, we have been reading about it in corporate board rooms and responding to the tactics in cultural venues — like artists and entertainers who are criticized for announcing their appearances in Israel,” he said. “We see that the architects of delegitimization and some of those who originally conceived of it are anti-Semitic. … BDS on campus often marginalizes Jewish students and pro-Israel students and pressures other students who are pro-Israel.”

Three Reut staff members met in the city with two representatives of J Street in March. One of them was Rachel Lerner, J Street’s senior vice president for community relations.

“We spoke a lot about campuses and how BDS was playing out for the more progressive spectrum,” she recalled, adding that J Street has periodically worked with Reut over the years.

“They were very interested in how we combat BDS in the various places we work and what has been effective for us,” Lerner said. “It felt like we had credibility with the progressive crowd — which is where BDS seems to be taking off.” She said they also talked about “how the Jewish community has engaged around this and which things worked and [which] did not work well.

“Generally, the people who are susceptible to the BDS movement are those who are frustrated with Israeli policy and see BDS as the best way to engage those [opposed to that policy]. These are the people we can talk to and can move away from BDS by presenting them with an alternative, very real solution. Organizations that practice a more right-wing view and try to use progressive language [to reach BDS supporters] are not effective with progressive people,” she said. “You have to present a real alternative that leads to a two-state solution and ends the occupation.”

Asked about a proposal for a two-state solution put forth by a group called Commanders for Israel’s Security (CIS) that has been endorsed by 215 former Israeli generals and former Prime Minister Ehud Barak, Lerner said it might work because it demonstrates concern for Israeli and Palestinian security.

“Any viable alternative can move people who are more prone to support BDS out of frustration with how things are going,” she said, adding that she does not believe that all of those who support BDS are anti-Semitic or want to see Israel’s demise.

Nimrod Novik, a fellow with the Israel Policy Forum, a group that supports a two-state solution and is promoting the CIS proposal, told The Jewish Week that for Israeli Prime Minister Benjamin Netanyahu to “restore credibility to his commitment” to pursuing a two-state solution, he should develop “robust security arrangements for Israelis; very generous economic and civil measures to improve life for the Palestinians, and diplomatic initiatives that makes clear our presence east of the security barrier is temporary and for security reasons only. Therefore, there will not be any building there and IDF forces would be deployed until there is a peace agreement,” he said. “If he is serious about creating a Palestinian state east of the barrier, say so now.”

Novik hastened to say that the CIS report was not written “to undo or minimize the damage done by BDS.” Rather, he said, it was designed to “suggest a platform” for a series of Israeli initiatives that would help Israelis and Palestinians while “improving Israel’s standing in the world.”

The outreach to progressive Jewish groups has been the hallmark of the Israel Action Network, formed five years ago as a strategic initiative of the Jewish Federations of North America and the Jewish Council for Public Affairs to fight delegitimization efforts. Geri Palest, its co-director, said such outreach was natural because “that’s where the problems are and we need a big-tent strategy.”

“We have to isolate the mainstream from the extreme, and J Street has always been a part of the broader mainstream,” she said.

“We have always supported peace building efforts and economic cooperation between Israelis and Palestinians,” she added. “We say to those who want to express concerns about what they feel are bad policies of the Israeli government — give us constructive alternatives. … People need viable paths.”