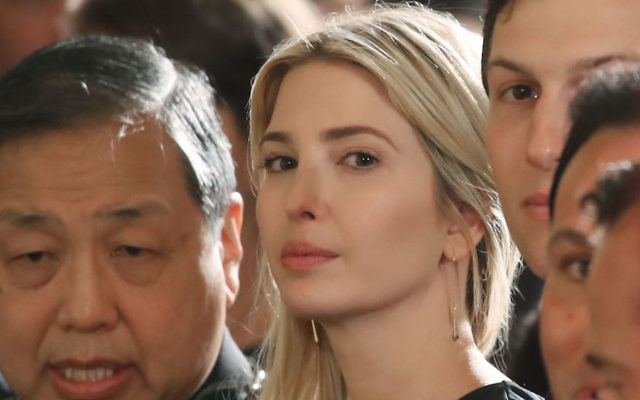 WASHINGTON (JTA) — Ivanka Trump said she did not expect the level of “viciousness” her father’s presidency would bring her, but also felt “blessed” by moments, including a private visit to the Western Wall.

Ivanka Trump, an unpaid aide in President Donald Trump’s White House, did not describe what attacks particularly affected her. She has come under fire from the left for claiming to bring progressive values to the White House, including on LGBT and women’s rights, while her father rolls back some gains in these areas. A gag started by “Saturday Night Live” in which Ivanka Trump, who before joining the White House ran an eponymous lifestyle branding company, launches a perfume called Complicit has gone viral.

Trump said she understood the work would not be easy and was instead focused on advancing her father’s jobs agenda.

“My father and this administration intends to be transformative, and we want to do big bold things and we’re looking to change the status quo,” she said.

She praised her father and her husband, Jared Kushner, another unpaid White House aide, for the successes of Trump’s first foreign tour as president last month, to Saudi Arabia, Israel and the Palestinian areas, and the Vatican.

“It was amazing the leadership my father showed, the way he was able to foster real dialogue, substantive dialogue that not only concluded in billions of dollars, $400 billion of business for American businesses, which was an amazing thing in of itself, but there was able to be this substantive dialogue with these 54 leaders about how they’ll collectively join to stop funding terrorism,” she said.

The business deals discussed on the trip are still at the proposal level. The commitment to collectively defund terrorism resulted in part in the decision by five Arab countries to isolate Qatar, where much funding for terrorist activity originates, setting off a minor diplomatic crisis because Qatar is also a U.S. ally housing a major American military base.

Trump, who is Jewish, said her visit to the Western Wall in Jerusalem was one of many “surreal” moments since her father assumed the presidency.

“It was the first time a sitting president was at the Western Wall and visited the Kotel,” she said, using the Hebrew word for the site. “Every day in this experience has been surreal, but that was truly an unbelievable moment, so I feel truly blessed and privileged to have been there.”

A “Fox and Friends” interviewer pressed Trump as to what the visit meant to her as a convert.

“It was deeply personal for me as you note standing at the Western Wall in a moment of privacy because it was really just us, it was our family that was there,” she said. “It was beyond special — for each of these moments it’s hard to find the words to adequately describe them.”

Trump said her life has been upended to a degree by the media attention, particularly being trailed by photographers.

“I’m looking for alternative routes outside of my home,” she said. “There’s a scrutiny and there’s an interest that exceeds anything I’ve ever experienced before.”