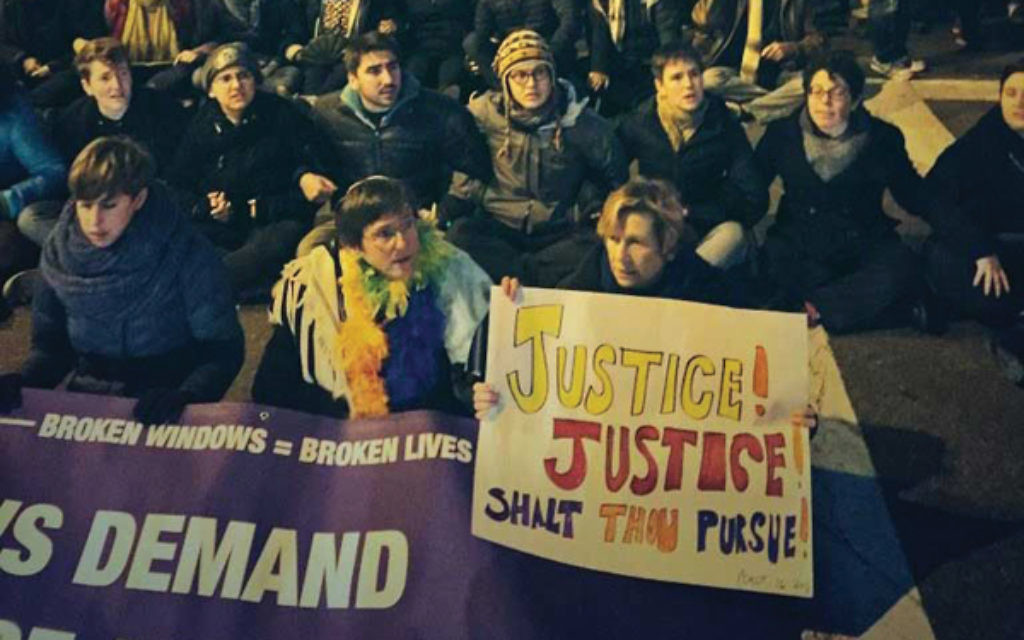 Yevilah McCoy grew up in Crown Heights, where her father studied under one of the great Chabad rebbes. She attended yeshivas and, later, the Hebrew University of Jerusalem, and she is now an executive at Combined Jewish Philanthropies of Greater Boston. Her husband is a physician and, together, they live in one of Boston’s most comfortable suburbs.

But that hasn’t prevented McCoy from experiencing what she considers police harassment, nor has it stopped her or husband from fearing what could happen to any of their four children if local police stop or arrest one of them.

All four children — two boys, 12 and 16, and two girls, 8 and 17 — attend Jewish day schools in the area, said McCoy, who, with her husband, is both an Orthodox Jew and an African American. It’s that last detail that makes McCoy fear for her children at times and prompts what she calls “The Conversation” — the discussion that many black parents have with their kids about how to behave in any encounter with police to avoid being seen as a threat.

“The fact that I was raised as Jewish, or that my children are being raised as Jewish, doesn’t mitigate the need for ‘The Conversation,’” said McCoy, CJP’s director of inclusion and an activist for most of her life. She and her husband have told their children about “the need” to answer any questions police might have, to avoid making any sudden movements and, if they have to reach in their pocket for an ID, to make clear what it is they’re reaching for.

Concerns like McCoy’s are nothing new in the black community, she said, recalling that her parents had the same sort of conversations with her as she was growing up. But the subject is new to many white Americans, including many Jews, in the wake of a spate of recent cases in which unarmed black citizens have wound up dead in encounters with local police.

The cases have included the death of Michael Brown, the 18-year-old black man shot by a police officer last August in Ferguson, Mo., an episode that sparked days of protests, confrontations and riots in and around that suburb of St. Louis. Another round of protests and riots took place last month after a grand jury decided not to indict the officer, an outcome that divided the country.

But that case lacked the clarity that many people see in the death of Eric Garner, a 43-year-old black man killed last July on Staten Island as police officers trying to take him into custody wrestled him to the ground and held him in a chokehold, a practice barred by the New York Police Department. A video of the incident shows Garner repeatedly shouting “I can’t breathe” to the officers before losing consciousness. But despite the video, and a coroner’s conclusion that his death was a homicide, a grand jury last week chose not to issue any indictments.

The aftershocks of that decision have hit the Jewish community, much as they’ve hit the rest of the country. Progressive Jews have marched and gotten arrested, rabbis have delivered sermons, and some organizations, like the Anti-Defamation League and the Union for Reform Judaism, have issued statements. Other groups, such as the Orthodox Union and the American Jewish Committee, have elected to say or do nothing.

One march that drew headlines last week took place on the Upper West Side, where about 500 people gathered Dec. 4 at B’nai Jeshurun for an annual event sponsored by Jews for Racial and Economic Justice. They marched about eight blocks from the synagogue to 96th Street and Broadway, where more than two dozen participants, including four rabbis, engaged in civil disobedience by sitting down in the intersection and blocking traffic.

Leaders who participated in the march, but chose not to get arrested, included U.S. Rep. Jerrold Nadler (D-Manhattan), Rabbi Rolando Matalon of B’nai Jeshurun, and Rabbi Ellen Lippman of Kolot Chayeinu/Voice of Our Lives, a Brooklyn congregation.

Lippman, whose congregation’s race task force recently conducted a three-day training event called “Undoing Racism,” said that those who chose to get arrested wanted “to put their bodies on the line” to show their solidarity with other protesters around the city.

“When we’re willing to put our bodies on the line, it shows we’re serious and willing to suffer the consequences,” Rabbi Lippman said.

In a sign of how much passion was stirred by the march, several bystanders along the route told The Jewish Week that they amazed at the sight of religious Jews, some carrying signs in Hebrew, marching in support of black Americans.

One of them, 51-year-old Martin Caston of Crown Heights, said he was “overwhelmed” by the march. “This is the way it’s supposed to be,” he said, saying that concerns over police misconduct are a “people issue,” not a “racial issue.”

But at least two participants in the march said they were disturbed by some of the chants they heard along the way, including one referring to “the racist police.”

“I joined the march because I wanted to make a statement that black lives matter and that violence in this form is unacceptable,” said Jordan Soffer, an Upper West Side resident who is studying for rabbinate at Yeshivat Chovevei Torah in Riverdale. “But at the same time, I appreciate what the police do. I appreciate their hard work, and there’s no reason to believe they’re more racist than any other group of people.”

Rabbi Ari Hart, a founder of the Orthodox social-justice group Uri L’Tzedek and an associate rabbi at the Hebrew Institute of Riverdale, was also active in the protests, but expressed the same discomfort. “I don’t believe the NYPD is systemically racist,” he said, noting that many of the police officers controlling the march were black themselves. “I do believe there are issues of accountability and abuse that need to be addressed.”

But speaking in an interview after the march, Rabbi Matalon appeared to excuse the rhetoric, saying it “expressed the anger and outrage people feel.” He noted that everyone at the march, including those participating in civil disobedience, acted peacefully, and he argued that the NYPD does have “an element of racism,” just as society at large does.

Kent, JFREJ’s executive director, said her organization belongs to a coalition of 64 groups that are calling for “full accountability” of all officers involved in Garner’s death, a thorough investigation into the NYPD’s policies by the U.S. Department of Justice, and an end to the NYPD’s “broken windows” approach, an aggressive theory of police work holding that arresting people for petty crimes deters big ones. It’s this approach that critics of the theory believe may have cost the life of Eric Garner, who police tried to arrest for selling untaxed cigarettes.

“It’s a step in the right direction,” as well as a sign that protests around the country are having an impact, Kent said.

As members of JFREJ marched and participated in civil disobedience, other Jewish organizations worked quietly on the ground to address issues raised by the controversy, reflecting their role and approach.

Deborah Lauter, the ADL’s national civil rights director, said her agency is looking at various proposals from Schneiderman, Mayor Bill De Blasio and others with an eye toward which of them might re-establish trust between law enforcement and minority communities — an essential factor in effecting police work.

She also spoke about one of ADL’s training programs, “Law Enforcement and Society,” in which “we talk to law enforcement about what happened in Nazi Germany when police who were sworn to protect [citizens] became tools of the killing machine.” The program brings law-enforcement officials to the U.S. Holocaust Memorial Museum in Washington.

Locally, Rabbi Bob Kaplan, director of intergroup relations and community concerns at the Jewish Community Relations Council of New York, said his organization is reaching out, as it always has, to create dialogue between community groups and local police.

Many rabbis also addressed the matter from the pulpit, including Rabbi Avi Weiss, senior rabbi at the Modern Orthodox Hebrew Institute of Riverdale. Rabbi Weiss spoke of his huge admiration for the NYPD while also condemning the “aberrations” — those police who “use their power abusively.” In those cases, he said, “we must all speak out. It’s not the problem of one community, but of all communities.”

But perhaps those in the Jewish community who are most emotionally invested in recent events are African-American Jews like McCoy.

McCoy recalled her own brush with police several years ago that had her fearing for her life, as well as fears about how her children might be treated in years to come. The situation has contributed to a complex welter of emotions that leaves her feeling as an insider and an outsider in the Jewish community all at once.

“Many people in my congregation would feel that we’re all safe here, we’re all part of the same community,” she said. But “what’s visceral is to realize that I and my family are vulnerable in a way that my white-Jewish brothers and sisters are not.”

McCoy said the current situation for black Americans reminds her of a time, not so long ago, when Jewish Americans leaving their home with a kipa meant that they “might be followed, beat up or, in some other fashion, put in harm’s way. Thank God those days are over.”

But she hopes her fellow Jews reconnect with those memories, she said.

“I need for my fellow Jewish brothers and sisters to realize that my children will have to navigate institutionalized racism, whether it’s on the streets or in the workplace, and to act as their allies” as they do so, McCoy said. “I need to know that my family has the full backing of the Jewish community in dealing with racism, and the only way that’s going to happen is if everyone who identifies with being Jewish recognizes we’re a multiracial community.”