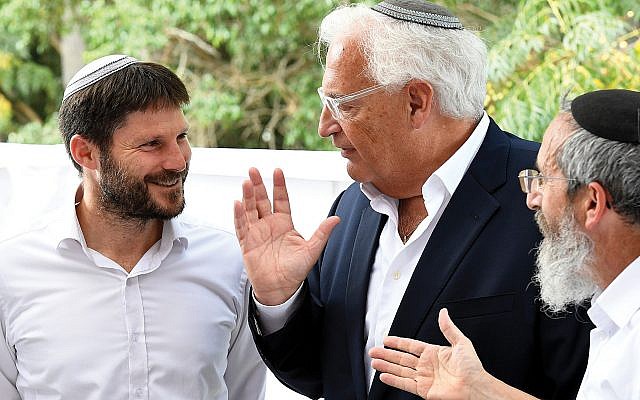 Smotrich, left, with U.S. Ambassador David Friedman during a 2017 visit to a Sderot yeshiva. Wikimedia Commons

Has Israel’s prime minister found his own William Barr?

Benjamin Netanyahu, facing his own legal woes, seems also to need someone to have his back, the role the U.S. attorney general appears to have played for President Donald Trump in the narrative framing of the 400-plus-page report by Special Counsel Robert Mueller. And Bezalel Smotrich is making sure he’s at the top of the list.

The hardline 38-year-old settler, who once organized a “beast parade” with animals to mock Jerusalem’s Pride Parade, is positioning himself as one of Netanyahu’s surest ways of avoiding an indictment, trial and possible prison term.

And while in the past rightist leaders made their demands and asked for settlement building in return, Smotrich is eyeing a much bigger prize: making the whole West Bank Israeli. In other words, annexation and the application of Israeli sovereignty.

“Unfortunately our prime minister may buy it to save his skin from investigations,” Hagit Ofran of Peace Now told The Jewish Week in an interview. “And that’s a very bad sign for Israel.”

Smotrich’s United Right is vital if Netanyahu is to build a stable right-wing coalition. And while he is leader of Tkuma, which controls only two of United Right’s five seats, he has emerged as one of its most powerful figures — and one who drives a hard bargain. “The hardest part of the coalition negotiation will be with Smotrich,” said Netanyahu ally David Bitan on Tuesday. “He is a stubborn ideologue.” Part of a two-billboard campaign poster by the Blue and White party shows Prime Minister Benjamin Netanyahu with members of the Kahanist Jewish Power party and Bezalel Smotrich, second from right. The poster reads “Kahane Chai,” a reference to the militant Rabbi Meir Kahane. The other side of the billboard showed the four leaders of the Blue and White party with the headline “Am Yisrael Chai.”

Saying Smotrich represents the “hardest” challenge is quite something, given that Netanyahu’s team is trying to manage the near-impossible: please both the ultra-Orthodox parties that want their religious demands met, and Avigdor Liberman’s Yisrael Beiteinu with its secularist agenda. Lieberman is determined to end draft exemptions for yeshiva students and see more charedim in the army; the charedi parties say that yeshiva students must never be forcibly drafted.

Smotrich isn’t only demanding annexation. Anticipating Donald Trump’s peace plan, he also wants a guarantee that there will be no territorial withdrawals from the West Bank. He is calling for Israelis to be allowed to return to Gaza and, in a more realistic but perhaps equally controversial idea, wants to abolish the Supreme Court’s ability to overturn Knesset laws that it deems unacceptable because, for example, they infringe the rights of Israel’s Arab minority. The Israeli right is frustrated that the court has used this power to quash some of its laws.

Netanyahu’s legal problems were a big theme of campaigning season, and now they are emerging as a major theme of coalition-building season. Israel’s attorney general, Avichai Mandelblit, plans to indict Netanyahu in relation to three corruption cases. Smotrich insists that proceedings must be stopped in their tracks, and plans to use any political power that Netanyahu rests in his hands to ensure this happens.

Buoyant about the prospect of a government post, he has been busy telling Israel’s television channels that he is aiming high, and has aspirations of running the very legal system that is poised to indict Netanyahu. He wants to become justice minister or education minister.

And while his predecessor, the rightist Ayelet Shaked, was widely criticized for politicizing the legal system, Smotrich wants to take this to a new level. He wants the legal system to give Bibi a free pass, according to analysts.

Smotrich believes in giving Netanyahu immunity from prosecution as long as he is prime minister, and wants to pass legislation that will make this reality. And he argues that this isn’t a matter of subverting democracy, but rather respecting it. He argued during campaigning that if Israel chose Bibi again, it’s a message that the people want him as leader and want the legal system to leave him alone so he can do his job.

Smotrich — echoing many Netanyahu supporters — has argued that immunity legislation would show “respect for the democratic decision and the will of the people.”

But his supposedly principled belief in protecting Bibi only goes so far. This week his party revealed that his price is annexation of the West Bank. And his vision goes way beyond the annexation that Netanyahu spoke about during campaigning, when he seemed to be referring only to particular areas with Jewish settlements. Smotrich wants annexation of the entire West Bank.

Ofran believes that he won’t get everything in one serving, but thinks that the West Bank could be annexed piece by piece. She thinks that Netanyahu will first wait for Trump to reveal his peace plan and for the Palestinians to reject it, and then cite the Palestinian reaction as an “excuse” for annexation.

Smotrich’s demands are alarming the political center, as well as left-wing figures like Ofran. Yair Lapid, a leader of the Blue and White party, said they would amount to the “elimination of the democratic structure of the state.”

But in the West Bank, many settlers feel that all they are seeing now is sour grapes after voters made their choices endorsing Netanyahu and Smotrich, and democracy is running its course by way of legitimate coalition negotiations.

“Continued media reference to Netanyahu’s personal legal issues in this context are stale and disrespectful to the Israeli voters and our democratic process,” claimed settler leader David Haivri, a councilman on the Samaria Regional Council and enthusiast for annexation. “Israelis were well aware of these questions before the elections.”

He argued: “More Israelis voted for Likud and the other coalition partners specifically because they support the policies being discussed in forming the guidelines of the new government and are not impressed with corruption charges against Netanyahu as something that should get in the way.”