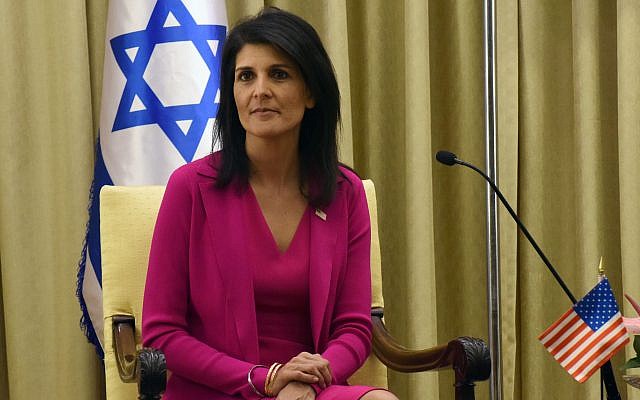 In a letter to President Trump sent on Oct. 9, 2018, Nikki Haley officially resigned from her position as the U.S. Ambassador to the United Nations. Through her speeches, tweets and bills, Haley has expressed her unwavering support for Israel, establishing herself as a great ally to the State.

During the 2016 presidential primary election, Haley was critical of Trump and was an avid supporter of Ted Cruz. However, when Trump received the nomination as the candidate of the Republican party, Haley announced her support for him in the general election. President Trump then chose Haley to be the U.S. Ambassador to the United Nations, prompting Haley’s resignation as governor of South Carolina. Although Haley joined Trump’s administration, she remained critical of some the President’s policies including his proposed ban on immigration from majority Muslim countries. Haley stated in her letter of resignation that although she would continue to share her concerns about Trump’s actions, “I expect to continue to speak out from time to time on important public policy matters.” She also dispelled rumors about running for president in 2020, adding that she would support Trump in his campaign for re-election.

As an ambassador, Haley has shown her great support for Israel through speeches and votes in the UN. In May 2017, Haley expressed her support for the U.S. to move their embassy in Israel from Tel Aviv to Jerusalem. In December of 2017, when the vote to move the embassy was approaching, Haley warned other countries that the U.S. would scrutinize any country who voted against the U.S.’s decision. In November 2018, after the United Nations General Assembly (UNGA) suggested that Israel return the Golan Heights to Syria, Haley opposed the resolution due to “the resolution’s anti-Israel bias, as well as the militarization of the Syrian Golan border, and a worsening humanitarian crisis.” In the following month, after Hamas repeatedly fired rockets into Israel aimed at heavily-civilian populated areas, and constructed tunnels into Israel, the U.S. was ready to condemn Hamas and have the UN adopt their condemnation. However, Haley was disappointed when a new policy arose, ruling that in order to adopt this resolution, there needed to be a two-thirds majority. After voting, the resolution did not meet the two-thirds requirement and it was not adopted. In light of the failed resolution, Haley issued a statement accusing many countries in the UN of having double standards that reflects a clear bias against Israel, explaining that “There is nothing more anti-Semitic than saying we cannot condemn terrorism against Israel, while we would not hesitate for a minute to condemn the same acts if they were taken against any other country.” Haley has been persistent with her message, making her final tweet a condemnation of UNESCO’s bias against Israel.

The Sanhedrin, an Israeli NGO, expressed their gratitude to Haley and all that she has done for Israel by issuing the minting of a coin and inviting her to be the president of the Organization of 70 Nations. Haley’s strong and constant support for the state of Israel has made her a hero for the Jewish nation; she’s become a figure of hope for Jews all across the globe.