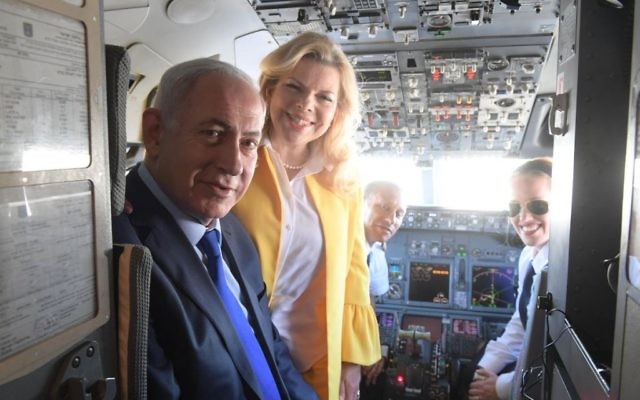 Nechama Spiegel Novak, a mother of four who has been flying for the national carrier since earlier this year, left Ben Gurion International Airport on Wednesday morning guiding a chartered Boeing 737 to Thessaloniki, where Netanyahu is participating in a trilateral summit with Greece and Cyprus.

The prime minister and his wife, Sara, took several photos with the pilot, who was the first officer on the flight, before they took off.

Novak attended flight school in the United States, where she worked to log enough flight hours. Unlike most Israeli pilots, she did not serve in the Israeli Air Force, where most pilots log their flight hours and get their licenses.

We are now going to meet with the first ultra-orthodox woman pilot. You are invited to join. She is the first, but not the last. pic.twitter.com/ZEjYt0M8LE

“Being a pilot has always been a dream of mine. My husband is very supportive, and he is helping realize this dream,” she said in 2015 when she started her flight training.

Novak lives in a a haredi neighborhood of Jerusalem and is reluctant to grant interviews.