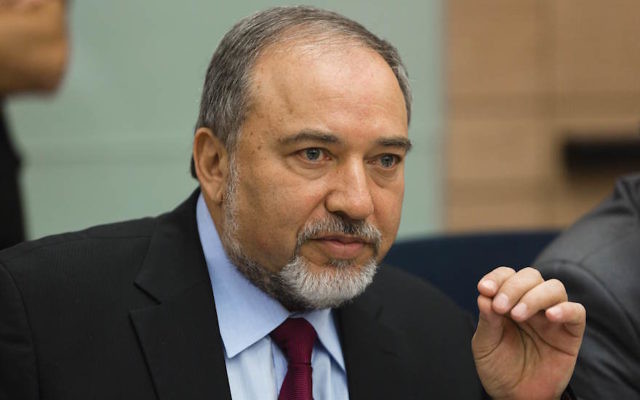 JERUSALEM (JTA) — Israel Defense Minister Avigdor Liberman said Israel is “far closer” to an agreement with the Palestinians than it has ever been before.

In an interview with Israel’s Channel 2 TV station Thursday, Liberman expressed confidence that an offer of normalized relations with Arab states would bring the government and people of Israel on board.

“We are far closer to an agreement than ever before,” he said. “If someone comes and puts a deal on the table that includes an agreement with all the moderate Arab states, including the opening of embassies, trade relations and direct flights, I believe that it will get an overwhelming majority in the Knesset and among the people.”

Liberman, the head of the hawkish Yisrael Beiteinu party, suggested U.S. President Donald Trump’s administration had played a role in creating an “arrangement,” but declined to provide details.

Asked how a deal would be realized, Liberman said, “Because Trump has arrived on the scene and because, as I keep saying, the Arab countries have internalized that their problem is not Israel. Israel can be a solution to the problem.”

Liberman, who is scheduled to speak, in English, at a public event in Tel Aviv next week, said Israeli Prime Minister Benjamin Netanyahu was committed to making a deal.

“If you’re asking me whether Netanyahu is making every effort, yes, he is,” he said. “I can testify that he is making a great many efforts.”

Liberman has long said he does not believe peace is possible in the foreseeable future. Ahead of the 2015 elections, Netanyahu promised there would be no Palestinian state on his watch. With Trump seeking the “ultimate deal” between Israel and the Palestinians, Jerusalem has reportedly been advocating a regional arrangement that would not necessarily create a Palestinian state.

But Gulf Arab states and the Palestinians have continued to back the 2002 Arab Peace Initiative, which makes a peace deal with the Palestinians a precondition for the opening of ties between Israel as the wider Arab world.

Palestinian Authority President Mahmoud Abbas is willing to suspend his demand that Israel freeze West Bank settlement construction and mute his campaign against the Jewish state at the United Nations, a top advisor told Bloomberg Thursday.