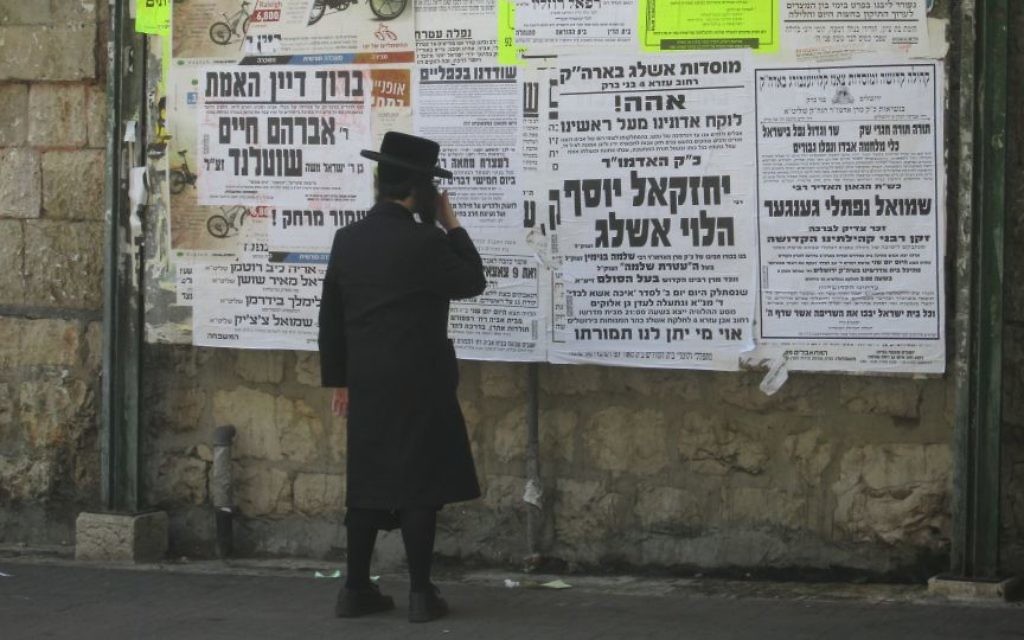 Jerusalem — They stand on either side of a gaping educational and cultural canyon in Israel’s charedi community.

One is looking inward, resisting attempts to have charedi children learn English and other secular subjects like math and trying to protect a lifestyle that harkens back to another century. The other, stung in his life by not knowing “core curriculum” subjects, is, to a degree, embracing educational change — especially for his two children.

In the run-up to the new school year, Yosef Shaulyan, the traditionalist, and Eli Adler, the reformer, are two very different faces of a debate that is roiling Israel’s ultra-Orthodox precincts. (A similar debate is playing out in Brooklyn as charedi advocates for better secular education at yeshivas are pressing city leaders to improve the curriculum.)

The effort in Israel to give charedi children a more solid grounding in secular subjects and make them more marketable in the workplace — spearheaded by Yair Lapid and his centrist Yesh Atid party — suffered two major setbacks in recent days, but advocates are pushing back.

The first was the Knesset’s repeal of a law that would have required state-funded charedi schools to teach secular subjects for 10 to 11 hours per week starting in 2018. Israeli Prime Minister Benjamin Netanyahu promised to support the repeal the core curriculum law in return for ultra-Orthodox parties’ agreement to join his coalition government.

The second was a new regulation instituted last week by Aryeh Deri, the ultra-Orthodox Interior minister, allowing men with Orthodox rabbinical degrees or at least six years of certified Talmud study but no English or math skills to compete for local council jobs that until now required a university degree.

Deri, who heads the charedi Shas Party, called his initiative “good news” for the ultra-Orthodox community.

“It can’t be that a young person who completes a degree in humanities can compete to be chosen and be preferred over a Torah student who studied and trained in Jewish studies,” said Deri, who vowed to fight for recognition of religion-only degrees for all municipal and government jobs.

Advocates for the core curriculum are appalled by the latest developments, which, they say, are intended to keep charedi boys and men in yeshivas and out of the workforce.

Charedi boys’ elementary and middle-schools teach so-called secular subjects just a few hours a week; the vast majority of charedi high schools and post-high-school yeshivas teach no secular subjects whatsoever, so graduates who want to attend university or work in a professional are at a huge disadvantage.

Charedi girls’ schools, in contrast, teach a fair number of secular subjects, something that has enabled 70 percent of charedi women to enter the workforce, especially in the education field.
Gilad Malach, head of the Program on Ultra-Orthodox Society in Israel at the Israel Democracy Institute, condemned Deri’s initiative. Charedi politicians, who are accountable to charedi rabbis, are trying to reverse what they consider a worrying trend in their community, he said.

“Over the past 15 years, more than 20,000 ultra-Orthodox men and women have completed academic degrees” in special culturally sensitive, gender-segregated programs designed specifically for charedi men and women, Malach noted. Many are employed as computer programmers and graphic designers.

Rather than allow those with only a religious background to be eligible for local authority jobs, Malach would like to see “an effort made to integrate” these 20,000 skilled charedi graduates into the workforce.

Uri Regev, director of the NGO Hiddush-Freedom of Religion for Israel, said that without a mandatory core curriculum, another generation of charedim “will remain unqualified for the labor market, poor and dependent upon the ultra-Orthodox political machine for meager living stipends and subsidies. This is the primary goal of this bill, and any MK [Knesset member] who supported it has committed no less than a criminal act.”

About 52 percent of charedi families lived below the poverty line in 2014, compared with 19 percent of the population overall, according to Israel’s National Insurance Institute.

Charedi reaction to the twin developments has been mixed, a fact that reflects heterogeneity in the ultra-Orthodox community, according to Tali Farkash, a charedi journalist who has co-launched a petition calling on pro-settlement Education Minister Naftali Bennett to require the charedi school system establish schools that teach core curriculum subjects in all major haredi cities. It also asks the Education Ministry to start actively supporting schools and other organizations that currently teach core curriculum studies.

Farakash predicted that Bennett, who still has the authority to mandate some core subjects in charedi schools, won’t do so “because he’s trying to keep the government coalition together and doesn’t want to fight the charedi parties he considers an ally when it comes to settlements.”

Farkash, who is pursuing a master’s degree despite “having to break my teeth to make up for gaps in my education,” emphasized that government-funded charedi schools taught core curriculum subjects until the 1980s, when the state largely relinquished supervision of charedi schools to the charedi sector.

Until now, Farkash said, parents who want to provide their high school-age children a charedi education that includes significant secular studies must pay much higher tuition than the fees charged by traditional charedi high schools.

Although plenty of charedi parents want this option, many don’t want to be branded as radicals, Farkash said. “I’ve been meeting with a lot of parents who want things to be different but are afraid of being stigmatized if they do.”

Yosef Shaulyan (left) isn’t one of them. Employed as a rabbinic pleader — an advocate versed in Jewish and civil law who represents clients before the Chief Rabbinate’s rabbinical courts — Shaulyan believes charedi boys and young men “don’t need to study toward the bagrut,” Israel’s matriculation exams in mostly secular subjects.

“Those who want to study English, for example, can do so,” Shaulyan said. “There are charedi schools that offer it, but jobs such as mine don’t require knowledge in core subjects.”

In contrast, Eli Adler, a charedi man who studied some secular subjects as a child but only religious subjects in high school, said “not studying core subjects hurt me. It hurt my choices in life.”

“Today," Adler said, “I work with charedi youth at risk in education and help integrate charedi teens into the IDF, but I do this in spite of not having a university degree.”

“I know boys who learn with private tutors in the evenings. One way or another my son will learn core subjects, too,” he said.