Efrat Ben Zur performs in in David Grossman’s “To the End of the Land.” Courtesy of Gerard Allon

When works by two of Israel’s most celebrated artists — novelist David Grossman and filmmaker Amos Gitai — have their North American premieres as theatrical productions at the Lincoln Center Festival, the fierce debate in Israel over the role of the arts, as well as BDS politics here, will provide a backdrop to the action.

Gitai has written and directs the play “Yitzhak Rabin: Chronicle of an Assassination,” based on the journals of Leah Rabin, and Hanan Snir has adapted Grossman’s novel “To the End of the Land,” and directs the play. Both works focus on war and peace, anguish and hope, and they offer nuanced critiques of Israeli society. Such critiques have often not sat well with Israel’s controversial culture minister, Miri Regev, who believes that Israeli artists should toe a more nationalistic line and has threatened funding to those whose criticisms she feels are too harsh.

“A wise regime knows you must give art this power, this power of expression.”

Last month, after being awarded the 2017 Man Booker Prize for his latest novel, “Man Walks Into a Bar,” Grossman told Israeli Army Radio, “It is very important that the person in charge of budgets and policy does not hinder literature and art from expressing their complexity, because that is what they were meant to do.” While he accepted Regev’s congratulations, he spoke of the problematic relations between the government and artists, noting that “a wise regime knows you must give art this power, this power of expression.”

That “power of expression” — and the complex turmoil that often comes with it where Israel is concerned — will be on display at this year’s 22nd annual Lincoln Center Festival, which itself is inspired by the political and social landscape.

Supporters of the boycott, divestment and sanctions movement against Israel have made their voices heard. 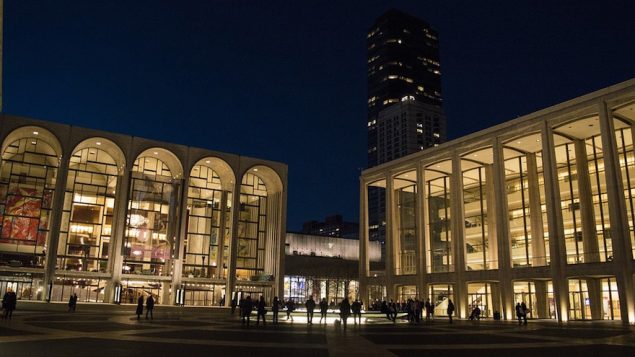 Organized by the group Adalah-NY, a group of 60 theater artists sent a letter of protest calling on Lincoln Center to retract “To the End of the Land,” as it is being produced with the support of Israel’s Office of Cultural Affairs in North America — which has the support of the culture ministry. Signers include playwrights Lynn Nottage, director Andre Gregory and the writer Deborah Eisenberg. In a statement, Debora Spar, president of Lincoln Center, rejected the request.

“It’s such a translatable piece of work because it’s about the sacrifice, loss and devastation war causes to the landscape, to the soul.”

Asked about the letter, Nigel Redden, director of the annual festival known for its global, bold and challenging sensibility, told The Jewish Week, “I felt that this piece is such a nuanced and delicate piece about the reactions to war. It’s such a translatable piece of work because it’s about the sacrifice, loss and devastation war causes to the landscape, to the soul.

“The idea of this being in some way oppressive is as far from the truth as can be,” he said. “I think that David Grossman’s personal record stands for itself as someone very sensitive to the political complications that occur in Israel at this moment.”

Consul General of Israel in New York, Ambassador Dani Dayan, said, “New York is not a city of cultural bans and boycotts. It is a city of diversity, tolerance and free artistic expression. So it should surprise no one that an attempt to ban Israeli theatre from New York’s stages and to silence the effervescent cultural scene of the Jewish State ended in such abject failure.”

Gitai, whose films include “Kippur,” “Field Diary” and “Berlin-Jerusalem,” has said that the best way for artists to pay homage to their own culture is to be critical towards it.

Discussing “Yitzhak Rabin: Chronicle of an Assassination” and “To the End of the Land,” Redden, who recently announced that he is stepping down from the festival after almost 20 years, said, “Both pieces are pulled out of the depths of the heart.”

Before seeing “To the End of the Land” in Jerusalem, Redden read Grossman’s novel and wondered “whether the show could capture its pain and anguish, and it absolutely does,” he said. Co-produced by Habima National Theatre and the Cameri Theatre of Tel Aviv, the production (which will be performed July 20-24, lincolncenter.org/lc-festival) won several of Israel’s most distinguished theater awards, for best original play; best director, Hanan Snir; best actress in a leading role and best playwright, Snir. The play is presented in Hebrew, with English supertitles. 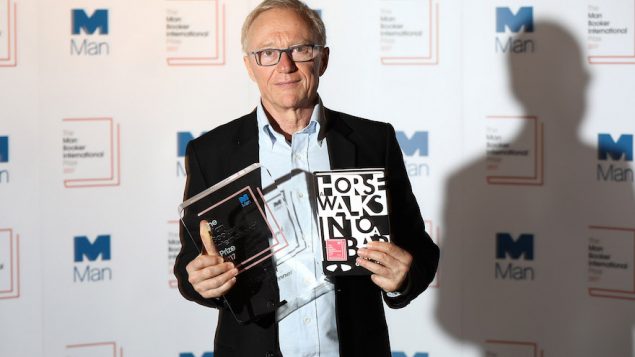 David Grossman posing after being announced as the winner of the Man Booker International Prize 2017 for his book “A Horse Walks into a Bar” in London. Getty Images

The 2008 novel, a tale of the strength of families and the cost of war, focuses on three friends with complicated ties to one another. When the woman’s son in the army returns to the front at a dangerous time, she escapes to wander about the Galilee, with the wishful thinking that if she isn’t home to be “notified,” nothing can happen to her son.

Grossman wrote most of the novel before the tragic death of his son Uri, a tank commander in the IDF, in the last hours of the Second Lebanon War. Grossman stopped writing then and has said that he wasn’t sure that he could finish the novel, but ultimately did.

Snir told The Jewish Week that it is challenging to turn a book into a play, especially a long novel, where much has to be cut out. He was also mindful of being sensitive to the author’s tragedy, and to the fact that all Israelis understood what Grossman went though.

“Everybody in Israel already knew the ending, but that’s not exactly the ending of the book,” he said. “You have to suspend disbelief, like in a Greek tragedy.” He points out that in the play the actors play musical instruments and that it doesn’t feel like a tragedy. It’s also a triangular story of love and friendship. 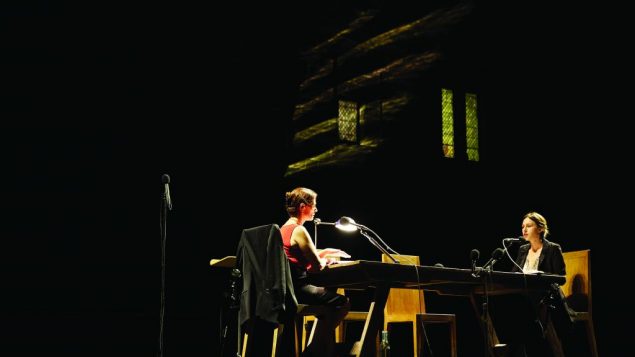 Snir, who won the Israeli Theatre Life Achievement Award in 2015, says that Grossman at first suggested that Snir do an adaptation of a later book, “Falling Out of Time,” but Snir was drawn to this one. He made the decision to go ahead while visiting Poland at the beginning of the Gaza War. Remembering what happened to Uri, he began writing in Warsaw, called Grossman and they decided to move ahead, immediately getting Habima and the Cameri involved.

“Sometimes resurrecting a memory can make things happen. But we must remain modest: art is not the most effective way to change reality. Politics or machine guns have a much more direct effect. However, art sometimes preserves the memory at the moment when the powers in place want to erase it.”.”

In Gitai’s case, he got started on “Yitzhak Rabin: Chronicle of an Assassination” (which will be performed on July 19) two weeks after the Rabin assassination in November 1995, when he met with Leah Rabin in her northern Tel Aviv apartment. He says that she was “extremely emotional but determined to carry on the story of her beloved husband.”

“We decided to do this project as a gesture of memory and even hope,” Gitai told The Jewish Week. “Sometimes resurrecting a memory can make things happen. But we must remain modest: art is not the most effective way to change reality. Politics or machine guns have a much more direct effect. However, art sometimes preserves the memory at the moment when the powers in place want to erase it.”

Gitai, who directed the narrative feature film, “Yitzhak Rabin: The Last Day,” also produced several parallel exhibitions before bringing this subject to the live stage. The show opens with two actresses sitting at a table, reading from the Rabin diaries, and are interrupted by music, videos and projected imagery. In one video, Leah Rabin says, “I’m not able to feel anger. Just pain.”

The director said, “Looking at the current Israeli reality, it seems the person who sketched out some kind of political alternative to the reality we’re in was Rabin. His simplicity, his integrity and direct talk, his ability 20 years ago to offer an alternative political thesis — and essentially his understanding that making peace means also that the “other” exists, all these could have offered a governmental alternative today.”

Redden describes the production, which he saw in Avignon, France, as “extraordinarily poignant, the story of what might have been — what losing a prime minister means in America for those of a certain age. It’s not that you feel that the people who came after were somehow lesser, but there was so much promise.” 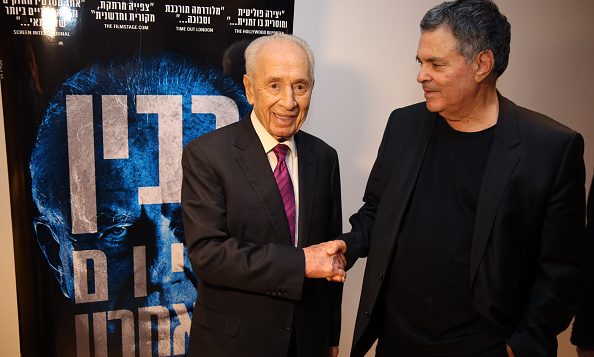 As part of a musical component of the Lincoln Center Festival, the Palestinian group Le Trio Joubran is performing “In the Shadow of Words” on July 29. The three Joubran brothers, born in Nazareth, are fourth-generation oud makers and players; their music blends traditional Arabic with jazz, rock and flamenco sounds. Their festival performance pays tribute to the late Palestinian poet Mahmoud Darwish, using his recorded voice and also projecting his words. (Considered by many to be the Palestinian national poet, Darwish was critical of Israel as well as Hamas. Israel’s defense minister, Avigdor Lieberman, said that his poems were “fuel for terror attacks.”)

This article has been updated Thursday to include a quote from Israel’s consul general in New York, Dani Dayan.