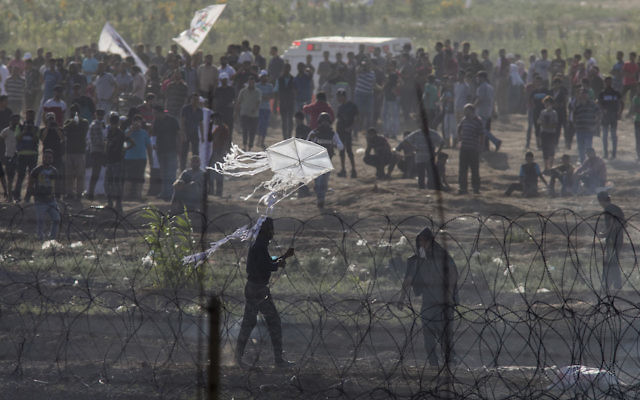 Protests along the Israel-Gaza border on June 8, 2018 near Nahal Oz, Israel. Getty Images

JERUSALEM (JTA) — An Israeli soldier was injured during clashes with Palestinian protesters on the border with Gaza.

Some 19 Palestinians also were injured during the demonstration on Sunday night, most by Israeli gunfire, according to the Gaza health ministry.

The Palestinian protesters, who reportedly were attempting to breach the border fence, threw explosive devices at the soldiers during the demonstration. The injured soldier, who remained in the hospital and sedated on Monday, was hit by one of the homemade explosives.

The Israeli Defense Forces retaliated for the injury by shelling two Hamas military posts in Gaza.

On Friday, during the regular weekly “March of Return” protests at the border, some 11,000 Gazans came out to protest, with 20 Palestinians wounded, as well as an Israeli officer.