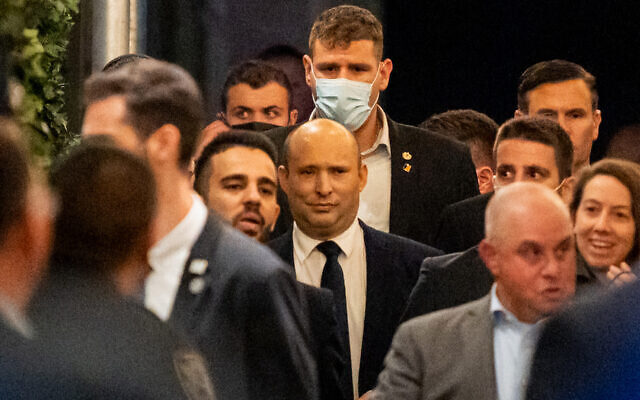 Good morning, New York. We’re back after the two-day holiday with a wrap-up of Israeli Prime Minister Naftali Bennett’s visit to New York, yet more on the Iron Dome funding brouhaha, lots of Jewish food news, and more.

REMEMBERING: Rabbi Moshe Tendler, a dean of the rabbinical school and a professor of Jewish medical ethics and biology at Yeshiva University whose advocacy allowed Orthodox Jews to donate organs and receive transplants, died Tuesday at age 95. (JTA)

SPEAK, PRAY, LOVE: The Israeli premier had a homecoming of sorts Monday evening, observing Shemini Atzeret at Kehilath Jeshurun, the Upper East Side synagogue he and his wife Galit attended in the early 2000s. (JTA)

YES, BUT…: Why did Rep. Jamaal Bowman (D-Bronx/Westchester) and other House progressives vote “yes” on $1 billion in additional funding for Israel’s Iron Dome system?

LAUGH TRACK: Former Minnesota senator Al Franken, who recently moved to New York to be near his grandchildren, has been honing his standup comedy act in clubs around the city. (New York Times)

GAME OVER: “Ask Me Another,” the Brooklyn-based NPR quiz show hosted by comedian and storyteller Ophira Eisenberg, is ending its run after nine years and 260 episodes. (NPR)

MISSION IMPOSSIBLE: The NY-based Orthodox Union will not be certifying the plant-based Impossible Pork as kosher, but not because of its ingredients. (JTA)

ON THE HOLE: Celebrate all things bagel at Brooklyn’s BagelFest, happening this Saturday (don’t blame us) 9:30 a.m. to 3:30 p.m. at BKLYN STUDIOS City Point in Downtown Brooklyn. (Gothamist)

RECIPE MYSTERY: The Washington Post has a recipe for “Jewish Apple Cake,” and tries to figure out how it got its name.

Rachel Hartman and her sister grew up in a West Bank settlement, but took very different paths: Hartman is an academic devoted to teaching coexistence and is herself engaged to a non-Jew; her sister belongs to an extremist group that opposes romantic relationships between Israeli Jews and non-Jews. Nevertheless, she writes, “We agreed to disagree, then disagreed some more.” (JTA)

Westchester Jewish Coalition for Immigration has teamed up with UJA-Federation, Shames Jewish JCC on the Hudson, Upwardly Global and JCC Mid-Westchester to collect needed items for newly arriving Afghan refugees. Nearly 30 regional synagogues have either signed up to be collection sites/drop-off locations, run their own internal drives or push the drive out to their communities by the Oct. 10 deadline. Go here for list of participating institutions. or buy and donate items here.

The Olga Lengyel Institute for Holocaust Studies and Human Rights presents a discussion on the role of women in the resistance movement during the Holocaust. With Sheryl Silver Ochayon, program director, Echoes & Reflections, International School for Holocaust Studies, Yad Vashem, and Sheri Rosenblum, director of Development and Outreach, Jewish Partisan Educational Foundation. Register for this Zoom event here. Noon.

Prof. Joel S. Kaminsky of Smith College will examine how early Christians and ancient rabbinic Jews each adopted the concept of “chosenness” in the Hebrew Bible, and how these approaches to chosenness both united and divided their communities. Register for this virtual Purchase College event here. 4:00 p.m.

Prominent comic book writers and editors join journalist Abraham Riesman, author of “True Believer: The Rise and Fall of Stan Lee,” in a conversation about the role Jews have played in superhero culture, both as characters and creators. Register for this Museum of Jewish Heritage – A Living Memorial to the Holocaust and the Society of Illustrators event here. 7:00 p.m.