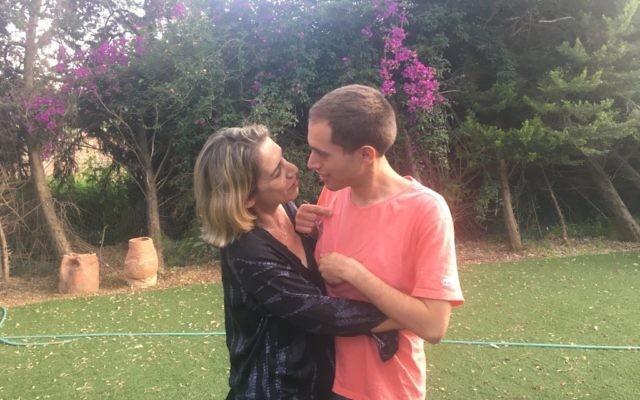 Abigail Dar and her son Yuval. Courtesy of Abigail Dar

Two Israeli moms of children with autism Abigail Dar and Sharon Imberman along with American mom Mieko Hester-Perez are acting together to set up a Global informational center for safe and effective treatment of Medical Cannabis for Autism.

These cannabis advocates have joined forces with Prof. Dedi Meiri at the Laboratory of Cancer Biology and Cannabinoid Research in the Israeli Technion and have already started gathering data and tracking over 70 Israeli kids and adults that are treated with medical cannabis. Their goal is to expand this research worldwide, for better understanding the strains that are most valuable/effective to treat kids with autism.

GKM: When did you begin using cannabis as treatment with Yuval When did you decide to try this method, and why? Can you describe with moderate detail what your and Yuval’s lives were like before utilizing medical cannabis versus after?

AD: Yuval is severely autistic. We are a very strong and resilient family. Yuval and our other 2 boys are the center of our lives. Since Yuval was diagnosed – I don’t think there’s any therapy we didn’t do or try. He was homeschooled till he was 10 – trying to do anything we can to make him overcome some of the devastating challenges that comes with this diagnosis. We also tried over a 12 anti-psychotic medications. They only made him more agitated and aggressive.

I someone would tell me this amazing boy of mine would become self injurious or have outbursts – I wouldn’t believe. But it also started. When he was 16 he started having seizures and along with it came those behaviors that makes the difference between being able to live and take care of your child, and between giving up, hospitalizing or institutionalizing him. We lived through 6 terrible years, where I had to use my husband and my other 2 boys as “bodyguards” – never knowing when Yuval would have an outburst. When he was so miserable.  You could see that these behaviors has some “unrevealed” source, it wasn’t Yuval, it was something that looked neurological, beyond his control. You could also see the misery and guilt feelings he had after each outburst. Heartbreaking.

Then, 14 months ago I found a doctor who was willing to prescribe Yuval medical cannabis (In Israel, the doctor apply to the medical cannabis unit in the ministry of health, they are the ones to approve or not). We got Yuval the license after appeal, and for “mercy treatment”–not autism.

Administering cannabis oil to Yuval, was, from the very first  day “a life changer.” In the last 18 months since he’s treated with cannabis, we had 2-3 outbursts compared to our daily reality before. I can be with my son, I can take care of him. He is so much more calm, smiling, attentive, communicating.

But it’s not only Yuval.

Once I saw what it had done to his live and ours (and as an-ever activist in promoting legislation, rights and developing inclusive solutions for autistic people in Israel), I started advocating to get the autism as a Qualifying condition for the Israeli MMJ plan. We’re not yet there. But – we started data gathering, managed to get cards/licenses/access for over 100 kids and adults with severe autism. Every day I talk and assist parents, guiding them in the “haze” of strains, ratios and growers. But every day there’s a parent telling me about dramatic changes with the kid. He slept the whole night…. He didn’t outburst, he stopped hitting and biting himself. He answered “yes” to my questions. Maybe small/irrelevant things for a normal parent. It’s a drama for us and our kids.

GKM: Can you describe your trial and error to find the most optimal treatment utilizing medical cannabis?

AD: In Israel there’s already experience with treating kids with severe epilepsy with high CBD strains, that are considered to be “safer”. So we started there, trying once of the strains we knew was working for seizures. But after a couple of months it seems to make Yuval a bit “depressed” and totally loose his appetite. We tried another strain of the same grower, with higher THC, but it seem to make him agitated. We changed supplier, tried his oils (more CBD, more THC) – it made him very anxious. Though in no stage we had the outbursts, I knew I had to look for something that works better for him. We changed to a third grower, managed to find the “sweet spot” with a mixture of strains. Higher CBD during daytime, more THC during nighttime… We still have times were we make some changes – in dosages or strains. It’s an ongoing work of tailoring each kid the strains and dosages that works for him.

GKM: Before undertaking your advocacy for medical cannabis and autism, you were an advocate and activist for people with autism in Israel. Can you talk a little bit about those experiences before medical cannabis became part of the picture?

AD: For many years, since Yuval was diagnosed when he was 16 months old, until he was a teenager, I was mainly focusing on taking care of him and his brothers (Yuval has twin brothers, 4 years younger than him). In the last 10 years, I became involved and active in promoting the rights and legislation of autistic people in Israel, and developing inclusive “frameworks” via “Kvutzat Hashavim” which is our nonprofit that provides support to adolescents and adults on the autistic spectrum

GKM: For people interested in this research, where can they go to learn more?

AD: Visit our website and read about our work in this recent article.

Gabrielle Kaplan-Mayer directs Jewish Learning Venture’s Whole Community Inclusion which fosters inclusion of people with disabilities through the Philadelphia Jewish community. She loves writing/editing for “The New Normal” and for WHYY’s newsworks. Her latest book The Little Gate Crasher is a memoir of her Great-Uncle Mace Bugen, a self-made millionaire and celebrity selfie-artist who was 43 inches tall and was chosen for this year’s Jewish Disability Awareness & Inclusion Month Book Selections. She’s recently shared an ELI Talk on Standing With Families Raising Kids With Disabilities and has released a journal designed for special needs parents.