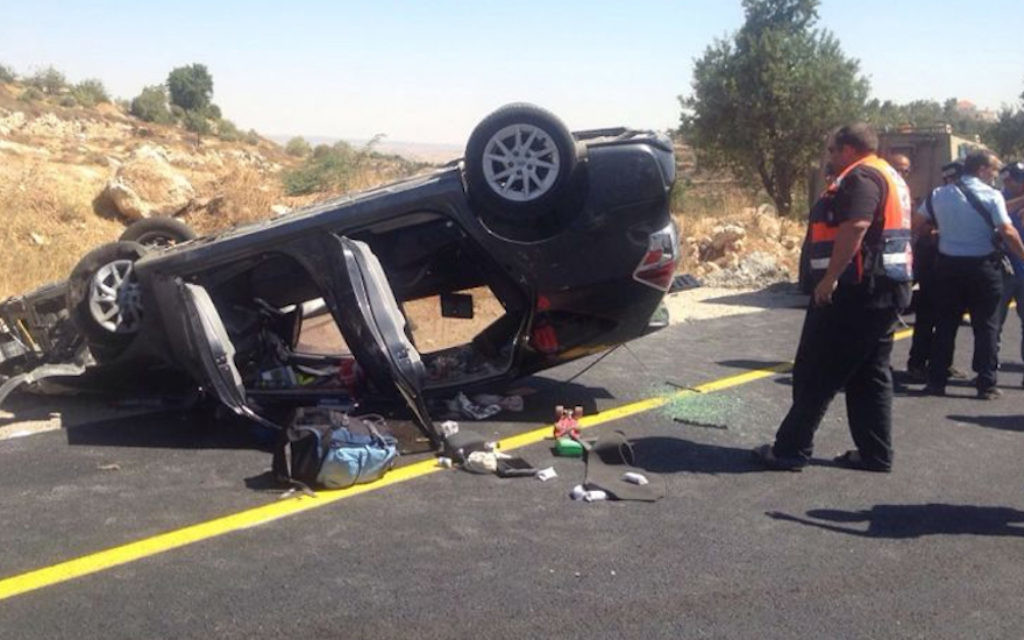 A rabbi was killed and his wife was severely wounded in a shooting attack near a West Bank settlement.

The attack Friday near Beit Hagai took place as the family traveled in their car on Route 60, Army Radio reported. Two of the family’s children were wounded: a 15-year-old boy, Pedayah, who sustained moderate wounds and his 13-year-old sister, Tehilah, who was lightly wounded. The man killed was identified as Michi Mark, 48, the head of the yeshiva in the West Bank settlement of Otniel, situated eight miles southwest of Hebron. His wife, Havah, was wounded in her head and is not conscious, Army Radio reported.

Individuals inside a car with Palestinian license plates overtook the Marks’ vehicle and opened fire with automatic weapons, authorities said. Israel Defense Forces troops, who are searching the area in a massive manhunt for the shooters, discovered 19 bullet casings at the scene of the attack. A picture of the car after the attack showed it overturned on the road, its front badly damaged. The couple had nine children.

Prime Minister Benjamin Netanyahu on Friday ordered that the amount of money being transferred by the Palestinian Authority to terrorists and their families be deducted from tax revenue collected by Israel on the P.A.’s behalf.

Earlier on Friday, Israeli troops killed a Palestinian woman whom they said had tried to stab them in Hebron. In a separate incident, a Palestinian man died from inhaling tear gas at a riot near Ramallah.

The woman, identified on Ynet as Sara Hajaj, 27, on Friday tried to carry out a stabbing attack near the Cave of the Patriarchs, in the Old City of Hebron, Israeli police spokesperson Micky Rosenfeld said. Border Police shot her after she had tried to stab an officer at a checkpoint with a knife, Israeli police said.

Palestinian media did not immediately identify the man who reportedly died of tear gas inhalation on Friday.

Hajaj was a native of the village of Bani Naim in the Hebron area, Ma’an news reported. On Thursday, a teenage boy from the same village, 17-year-old Muhammad Nasser Tarayrah, stabbed and murdered a 13-year-old girl, Hallel Yaffa Ariel, in Kiryat Arba — a Jewish settlement near Hebron. He was killed by security services in Ariel’s house, where he stabbed her to death in her bedroom. The Israel Defense Forces imposed a curfew on the village.

Prime Minister Benjamin Netanyahu vowed to strengthen Kiryat Arba, a major friction point between Palestinians and settlers in the West Bank, following the murder. On Friday, his office said in a statement, Netanyahu spoke with the parents and other family members and said: “We strengthen this place. Apart from the fighting, we will make it stronger. I will sit with the Defense Minister and we will decide how to strengthen the community.”

To see Ariel’s room, “to see the blood stains next to her bed and the books and clothes of a small child, this is shocking,” Netanyahu added during his visit to the settlement Friday. “It reminds us again who we are facing. They want to uproot what has been planted and we will deepen the roots. They will not make us leave here. I was impressed by this splendid family. Their spirit will not break and neither will ours. We will deepen the roots.”

In a second attack on Thursday, an armed Israeli civilian shot dead a Palestinian man in the Israeli coastal city of Netanya after he allegedly carried out a stabbing attack, leaving two Israelis wounded.

Israeli police Friday detained a 30-year-old resident of Jaffa on suspicions that the man assisted a now slain Palestinian in carrying out a stabbing attack in the Israeli coastal city of Netanya on Thursday, according to Israel’s police spokesperson.