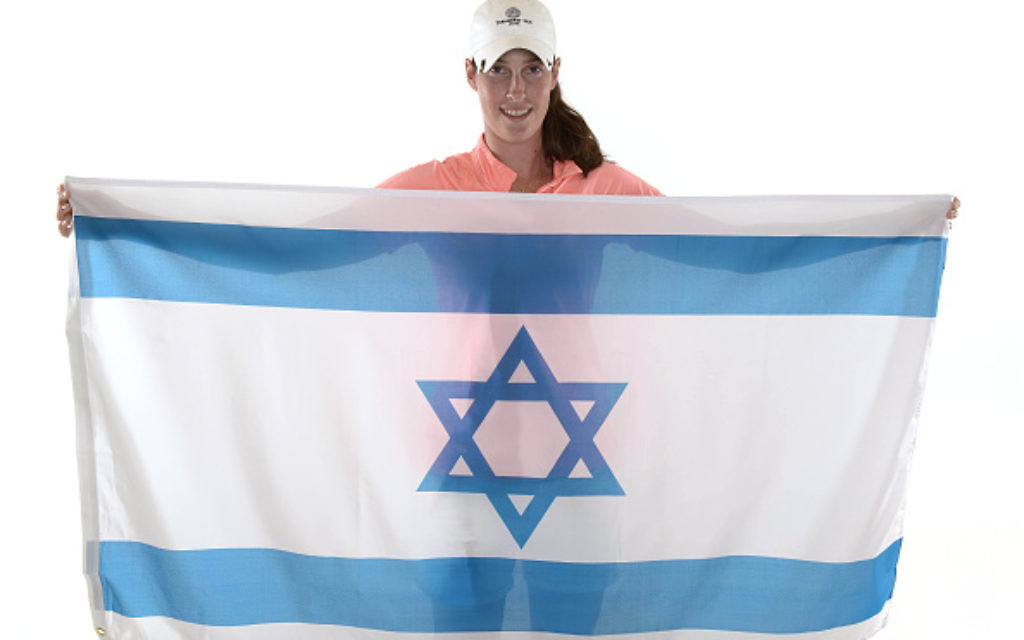 Professional golfer Laetitia Beck has an Israeli flag stitched onto the front of her golf bag.

At 24, Beck will be the first-ever Israeli to compete in golf at the 2016 Summer Olympics. And though she’ll be the only one with a club, the female athlete is looking forward to being one among several Israeli athletes competing in this year’s Olympic games.

“Just feeling part of the Israeli team is something that I didn’t really feel growing up because I was usually the only girl playing golf in Israel,” she told The Jewish Week in a recent phone interview. “For the first time in a long time I’m going to be part of an Israeli team.”

Beck’s golf ambitions are rather atypical to that of other young Israelis, who have minimal exposure to the sport. Israel has just two golf courses, one of which happens to be near Laetitia’s childhood home in Caesarea, near Tel Aviv. However, like other young Israelis, Beck enlisted in the army when she reached the age of 18. Her service was postponed due to her military designation as a sports prodigy. (Shahar Pe’er, the Israeli professional tennis player who won five singles and three doubles titles on the Women’s Tennis Association tour, was also given this special designation.)

“I’m originally from Belgium, and my parents played golf there a little bit,” said Beck, who speaks a perfect English. “When we moved to Israel when I was 6, we moved near the one 18-hole golf course. My parents wanted me to try golf, so they put me in class twice a week. I took it seriously when I was 12.” She subsequently “dropped everything else,” which included her interest in soccer and tennis, and started concentrating on golf.

Beck left home at 14 to pursue the sport professionally and train at the IMG Academy in Florida, a boarding school that integrates academics with a preparatory athletic experience. Her success in her high school years, including a second place finish at the Duke of York Young Champions Trophy in Scotland, earned her a scholarship to Duke University, where she was a two-time All-American and a psychology major. In 2014, Beck became the first woman from Israel to play golf professionally, making her debut at the 2014 Women’s British Open.

Beck says she hopes that her spot on the Israeli Olympic team can bring more popularity to the sport in her Jewish homeland. “Now more people are learning about the sport, and at least they are learning that they have a golfer representing them,” she said. “I hope they really give it a chance.”

Her goal at the Olympic Games would be to “give her best” and earn a spot in the top ten female golfers in the context of Olympic performance, where she will be competing against 59 female golfers. As for the pressure to perform, Beck revealed that it comes more from American media outlets than Israeli ones; however, she evades the burden of expectations by keeping herself grounded in the present.

“I keep telling myself ‘enjoy what you’re doing.’ Even if people add pressure, it’s not about them,” she said. “Even if I struggle, which I do a lot, I enjoy the process. I’m very lucky, especially considering where we [the Jewish people] were 70, 80 years ago. I know that if I enjoy myself, good things are going to come.”

Beck is looking forward to the opening ceremony at the upcoming Olympic Games in Rio.
She says she "experienced a similar feeling" at the Maccabiah games, where she competed at the age of 13 and won both an individual and team gold medal. “This time, obviously, it’s 10 times bigger. I’m sure it’s going to be pretty emotional," she said.

Her early independence prepared her for life as a professional athlete. “I left home when I was 14. I’m very used to that,” she said. She admitted that she would benefit from a supportive group surrounding her. “By finding a group I can trust, I can get a lot of help with training and get much better.”

When she’s not playing golf, Beck remains immersed in the sport by checking online stats and researching a variety of techniques.

“I think I need to find a hobby,” she laughed. “Every week I’m pretty much in a different state, so I stay most of the time with Jewish families. I’m very lucky with that, because I’m not alone. I usually hang out with the family, which distracts me from everything else.”

Beck said she hopes to change the way people look at Israel by providing a lens with which to view the country other than through politics. “I don’t give my political opinion,” she said. “I try and do the things that I do best, and politics is not one of them. I think we are a great people with great personalities, and I want them to see a different side of the country, and to really get to know who we are.”