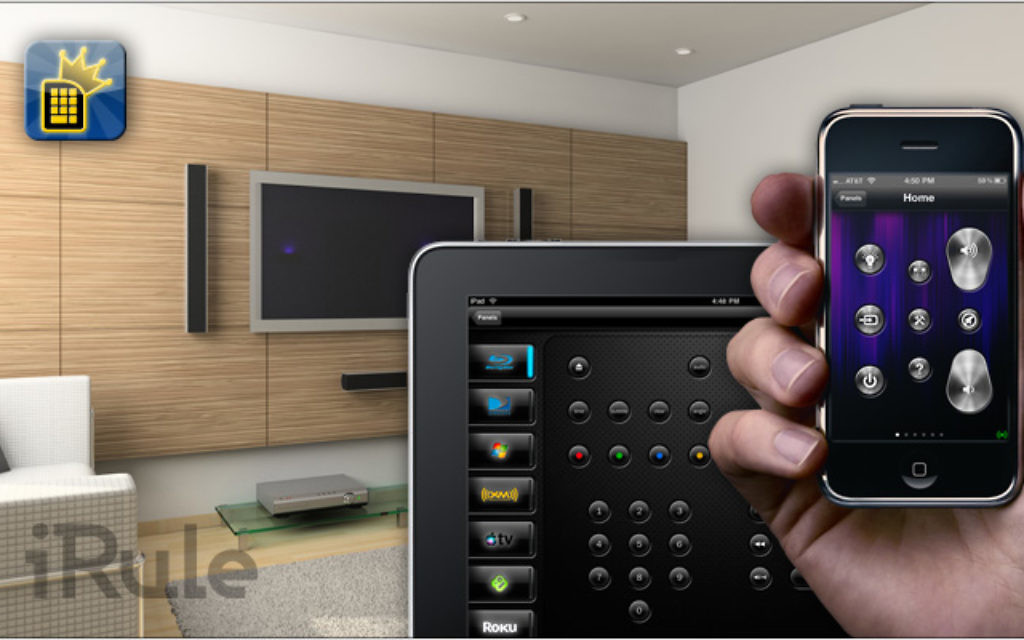 Using your iPhone or Android-powered smartphone to operate your television, Blue-Ray player, DVD, stereo, or well, anything else electronic in your house should really be a no-brainer at the end of 2011. After all, I remember using several PDA’s from the Sony Clie to the Palm/Handspring models to operate my TV as far back as a decade ago. However, there has been a dearth of apps available for download that allow you to control your entertainment system (although this is a standard feature of the Sony Tablet S).

Leave it to an Israeli engineer to solve that problem. Crain’s Detroit Business writer Tom Henderson filed a report about how two men looking to make $4,000 with an app wound up launching the company that would create the universal remote control app for the iPhone, iPad and iPod Touch, as well as Android phones and tablets. Here is Henderson’s article:

Last year, Itai Ben-Gal, an engineer from Israel, and Victor Nemirovsky, a software developer from Russia, were working in the auto supply chain. Today, to their surprise, they are smart-app entrepreneurs who work for themselves at a company expected to surpass the $1 million mark in revenue next year.

A plan to make $2,000 each last year on the side by developing and selling software for a universal remote control app for iPhones, iPads and iPod Touch has morphed instead into their company, iRule LLC, with serious funding, international sales and a revenue stream that already has it in the black.

The goal of making $2,000? That was how much Ben-Gal, a self-described audiovisual geek, figured was enough to help pay for a family vacation and reward his wife for her patience and indulgence for the nine months and small fortune he'd spent in 2008 on his "man cave" in the basement of his Novi house.

Instead, Ben-Gal and Nemirovsky made enough last year — with revenue of $110,000 through sales in 30 countries — for each to buy a new four-door family sedan.

This year, iRule has raised $500,000 from investors, including the first investment from the fledgling Compuware Ventures LLC, a new investment subsidiary of Compuware Corp. IRule projects revenue of at least $300,000 this year and $1 million in 2012.

Compuware is also providing office space in downtown Detroit and two software developers to help meet the target of having an app available that supports Android phones and tablets in time for the Christmas shopping season.

The app itself is free, but the company sells the proprietary software needed to run it and also sells at a small markup the third-party hardware that provides the infrared signal electronic devices operate on. The software and hardware each have a basic cost of $100, although the software scales up in price depending on the complexity of the system it's operating.

Ben-Gal worked in Plymouth for Perceptron Inc., and Nemirovsky in Wixom for Hexagon Metrology Ltd., a division of a Swedish company. Both companies make optical measuring tools for the auto industry.

Late in 2008, after Apple had released its first iPhone apps, Ben-Gal and Nemirovsky, who had become friends when they both worked at an Israeli company here before it was bought by Hexagon, met first over coffee and then over sushi to discuss creating an app that would easily let Ben-Gal control all of the electronic devices in his entertainment center from a single touch screen.

Nemirovsky wasn't an AV geek, but he liked a programming challenge. Ben-Gal said he had enough online AV buddies in chat rooms that would like such an app that they should be able to generate a little revenue, too.

The next thing they did was go to the mall. Nemirovsky had done all of his programming on PCs. They needed to buy him a Mac. A week later, he had programmed a functional prototype that allowed Ben-Gal to change the channels on his TV.

Eight minutes later, they had their first sale.

"The first version was buggy. It was missing a lot of functionality, but people started buying it," said Nemirovsky.

Two sales a day turned to three, then four. Soon, professional AV installers found them and were placing orders. By last fall, they were in the black, and the software was less buggy and more powerful.

It can now control all electronic components of an entertainment center, as well as lights and motorized shades.

"Sales went crazy," said Ben-Gal. "We started to think, "Maybe this is more than a hobby.'"

In February, Ben-Gal, iRule's president and CEO, left Perceptron to work as an entrepreneur full time. At the end of May, Nemirovsky, the chief technology officer, quit his job.

Meanwhile, a mutual acquaintance of Ben-Gal and Paul Czarnik, Compuware's chief technology officer, told Czarnik that he knew of a cool startup company looking for a seed investment. Czarnik was looking for the first portfolio company for Compuware's new venture arm.

"I got on iRule's website and thought, OK, it's geeky and I'm geeky so we'll have a meeting. It caught my attention. It was interesting, but at that point, I was just being polite. I wasn't really thinking about investing in consumer products," said Czarnik. "The eureka moment came in the meeting when Itai said it was all going to be cloud based."

Cloud computing is a major area of growth for Compuware.

IRule was already generating sales from installers of high-end AV equipment, who with iRule's app and software no longer had to make time-consuming house calls when various control devices stopped working. Using the software, they could access customer controls via the Internet.

If Czarnik had any doubts, they were erased when he visited Ben-Gal's entertainment center, which has 10-inch thick soundproofed walls, a bank of subwoofers and speakers hidden behind the 10-foot-wide projection screen that sit on 2,800 pounds of sand to limit vibration, and special acoustic materials stapled to the walls. The sound and picture quality are ear- and eye-catching, with all of the electronics, which are hidden outside the room, controlled by an iPad touch screen.

According to Robb O'Brien — a director of Beverly Hills, Calif.-based Clear Technology Group Inc., which does audiovisual installations for high-end home entertainment centers — iRule's technology is much cheaper, easier to install and easier to maintain or upgrade than remote control systems by such high-end providers asRemote Technologies Inc. of Minnesota.

"I had a client who wanted a full Apple-based control system, and there was nothing out there. I started doing research about two years ago and found iRule online in a chat forum. I said, "This is exactly what I'm looking for,' " he said.

Another iRule customer at the high end is Don Pretlow, president of Elite Yacht Solutions LLC of Cocoa, Fla., which provides control and automation systems to the high-end boat industry.

At the Florida International Boat Show Oct. 27-31 in Fort Lauderdale, the boat division of Brunswick Corp. announced that Elite will supply iRule controls as standard equipment on its yachts.

Pretlow said he, too, came across iRule while doing online research. He said the problem with entertainment systems on yachts is that yachts travel. If remotes get lost or broken, they need to be shipped. If software needs to be reinstalled on a boat now anchored in Monaco, the cost is prohibitive.

"I wanted something that could be installed or updated remotely worldwide, and this has everything we need," he said.

Pretlow said he plans to work with iRule developers to expand the capabilities to include all of a ship's lighting and air conditioning, too.

Switzerland-based Logitech International (Nasdaq: LOGI) makes the Harmony line of remotes and is iRule's main competitor at the lower end of the market, for the Best Buy and Walmart shopper, which iRule wants to target.

Krista Woods, director of public relations for Logitech's California-based U.S. operations, said she was unaware of iRule but that its business model makes sense and is timely. So much so, in fact, that on Sept. 20 Logitech announced its own smart phone app that operates Logitech Revue to control home entertainment systems for Apple and Android devices.