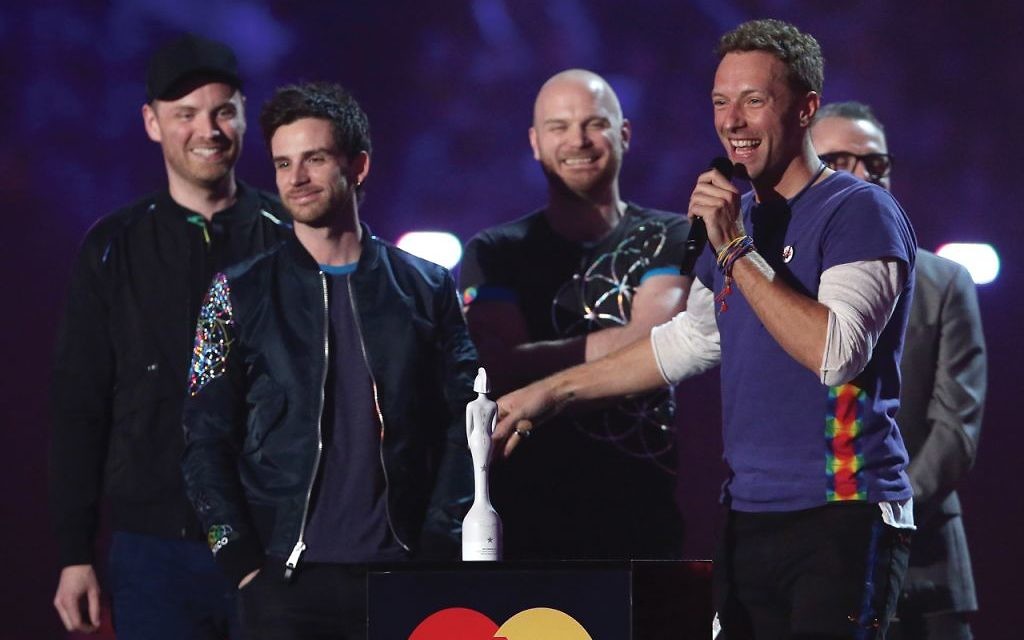 The MTV Video Music Awards, one of the highlights of the pop music calendar, celebrates a wide range of artists and people involved in the music industry. Beyonce was the big winner at Sunday’s event, walking away with eight awards, including the top award for best video.

Also among the winners were two young Israeli directors, Gal Muggia and Vania Heymann, who won the visual effects award for their work on Coldplay’s “Up & Up.” The single, incidentally, achieved its highest charting position globally in Israel, where it went to No. 1.

Muggia and Heymann’s video is a montage of very short clips, each of which represents a global issue or talking point, that uses a technique known as compositing.

In one, two cars race each other around the rings of a planet, while in another, a boat full of refugees floats inside a bathtub. There’s even what appears to be a not-so-subtle reference to Israel in one scene, where a concrete barrier stands at the edge of the sea, with bathers on the beach beyond it not able to get past it into the water.

In an interview with Haaretz, Muggia denied the connection. “The idea was to place a border in the sea, a very simple image that would speak for itself,” he told the paper, “but people attribute local significance to it. In America they thought it was Donald Trump’s wall, and here [in Israel] everyone thinks it is probably the separation barrier. To tell the truth, it is a wall that the Israeli company Real Motion created for us in 3D.”

Gal Muggia and Vania Heymann making the Coldplay video. Via YouTube
Coldplay’s position on Israel has often been ambiguous. In 2011, the band posted a link to a pro-Palestinian song on its Facebook page, only to remove it in the ensuing uproar. On its recent album, however, the British group has twice collaborated with Israeli directors, both times to positive effect. The video for the single “Hymn for the Weekend,” the effects for which were produced by a team from Yaron Yashinski Studio in Tel Aviv, has over a half billion views on YouTube. “Up & Up” so far has had over 75 million views in the three months since its release.

Lead singer Chris Martin was not shy about the Israeli connection in the video. In an interview with DJ Zane Lowe a few days before the release, he attributed it (“one of the best videos people have made”) to the directors — “these Israeli guys, these young guys.” He carried on, saying “I can’t believe that that’s our video. If that was someone else’s video, I’d be so jealous.”

Despite their relatively new arrival on the scene, Muggia and Heymann have both garnered attention in the past few years, even before last night’s awards ceremony. Heymann’s recent works include the video for rapper CeeLo Green’s single “Robin Williams,” the innovative interactive music video for Bob Dylan’s “Like a Rolling Stone,” which was released in 2013, as well as several clips for the Israeli satirical TV show “Eretz Nehederet” (Wonderful Country). Muggia’s credits include a video for Israeli hip-hop group HaDag Nahash and ads for Mazda and Cellcom.

The video for “Up & Up” was the duo’s first collaboration and was nominated in two categories, losing out to Melina Matsoukas, director of Beyonce’s video for “Formation,” in the award for best direction.