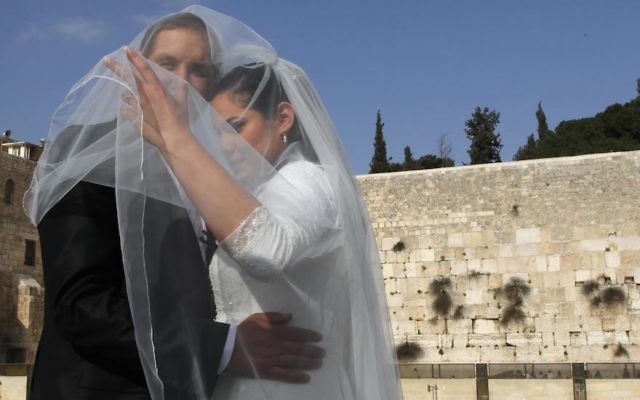 A groom and bride taking wedding pictures at the Western Wall in Jerusalem, April 13, 2011. (Nati Shohat/Flash90)

Tu b’Av is observed this year on Monday, the 15th day of the Jewish month of Av.

The Heskem B’Ahava, or Agreement of Love, was introduced in 2015 to prevent legal and halachic, or Jewish legal obstacles, in the event of the dissolution of a marriage.

Nearly 2,000 couples have signed the agreement before their weddings, with many more inquiring about it in recent months, according to Tzohar.

The organization hopes to make the agreement standard practice ahead of all Jewish weddings in the hopes of avoiding such issues as agunot, or chained wives.

Rabbinical and legal scholars drafted the agreement to address cases in which one spouse refuses the Jewish divorce, often demanding large sums of money or child custody in exchange for the “get.”

“Every couple who goes under the chuppah deserves to play a part in addressing the growing problem of people trapped by their spouses because of the absence of these types of agreements,” Rabbi Uri Ganzel, director of the Heskem B’Ahava Program, said in a statement. “So by signing on, a couple is able to help make this process more mainstream and combat that trend with the hope that it will one day be completely eradicated from our society.”

Founded in 1996, Tzohar’s core program provides halachic weddings for Jewish couples in Israel as a legal alternative to marriage under the haredi Orthodox-dominated Chief Rabbinate. More than 50,000 weddings have been performed under Tzohar’s auspices, with 20 scheduled this year for Tu b’Av.

“When the couple is standing under the chuppah and dreaming of their lives ahead together, all they can think of is love,” said Tzohar’s founder, Rabbi David Stav. “But the reality of life is there will be other marriages that don’t thrive in the way yours hopefully will. On their behalf, you deserve to be a part of making this agreement standard practice.”