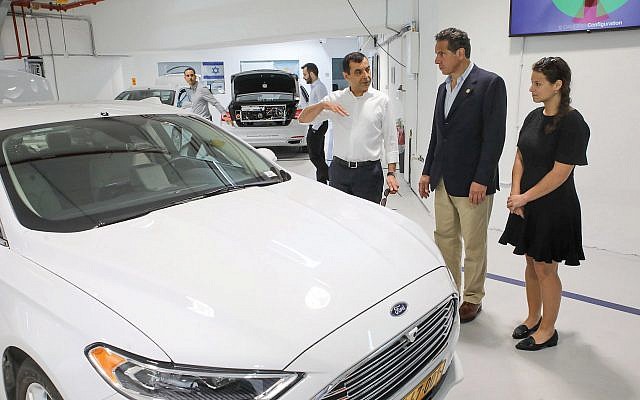 Gov. Cuomo touring the Mobileye office in Israel. He was intrigued by software that guided the driverless car. Courtesy of the Governor’s Office

While in Jerusalem two weeks ago to explore increasing New York State’s already extensive business ties with Israeli companies, Gov. Andrew Cuomo climbed into the passenger seat of a driverless car and rode through the streets of Jerusalem.

Afterwards, he told Mobileye, the company whose software drove the car, that he wanted to apply the same technology back home.

“New York has probably the largest subway system in the United States of America, if not the world — 600 miles of underground track,” he said. “We have been trying for years to get state-of-the-art technology to guide the navigation of the trains. … It’s over a billion-dollar product that we’re willing to purchase, so the economic benefits are amazing.”

Cuomo said that he was turning to Israel because the state wants to “look beyond the handful of companies who essentially have a monopoly on the rail system, to develop a navigation program capable of supporting the 21st-century transit system New Yorkers need and deserve.”

Cuomo’s trip came on the heels of a new study that found that there are already 506 Israeli-founded companies doing business in the state (436 opened since 2009) employing 24,850 New Yorkers and pumping in $18.6 billion in revenue last year, according to the New York-Israel Business Alliance. 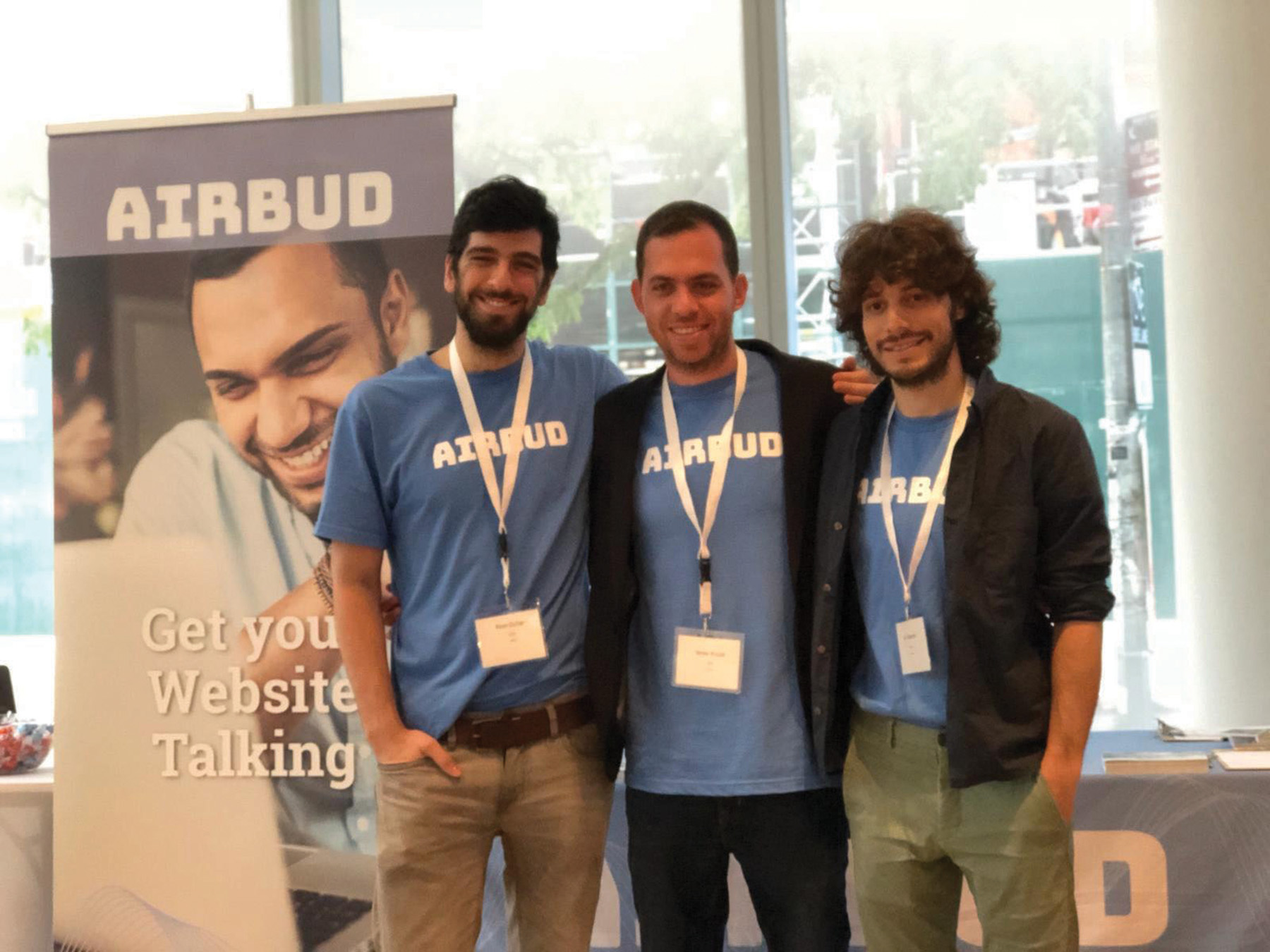 The Israeli start-up Airbud is a voice platform that allows businesses to add voice and chat capabilities to their websites and mobile apps. “We are here [in New York] for the long run.” Courtesy of Airbud
In the first-of-its-kind study, released last month, the alliance found also that when factoring in additional spending on goods and services in the local economy, the economic benefit to the state jumped to $33.8 billion, representing 2.02 percent of the state’s Gross Domestic Product. In 2016 alone, the Israeli-founded companies were responsible for more than 20 percent of the total capital raised in the state.

Aaron Kaplowitz, founder of the New York-Israel Business Alliance, who accompanied Cuomo on the trip, said that during the governor’s meeting with Amnon Shashua, president and CEO of Mobileye, Shashua “mentioned the importance of regulatory support in order to advance the company’s collision-avoidance technology. This is a great example of the private and public sectors needing to work together to build an innovation economy. …. New York State is committing considerable funds to grow sectors where Israelis excel: artificial intelligence (AI), drones, life sciences, renewable energy, agriculture, and cybersecurity. The bilateral relationship is strong, and it’s positioned to get stronger.”

The train and subway technology appears to be a priority for the governor, who said on a radio program prior to this trip: “I still don’t understand why you have cars that can drive themselves but we can’t figure out how to have a train that can’t hit the train in front of it. … I’m very close — and New Yorkers are very close — to Israel. There has been a rash of anti-Semitism all across this country — the synagogue shootings, etc. We’ve had it in this state, all across this state, and it’s repugnant to what New Yorkers believe and feel. I hope there is a message of solidarity and partnership in my trip to Israel, and I hope the Jewish community here is confident in this state’s position vis-à-vis Israel.”

There are in the state at least five Israeli-founded privately-held startup companies that are valued at $1 billion or more: Compass, a real estate tech company; WeWork, now the largest tenant of Manhattan office space; Lemonade Insurance Company; Payoneer, one of the world’s largest online money transfer platforms; and Taboola, an advertising firm.

Since returning from Israel, Cuomo has signed a $2 million partnership agreement between New York and the Israel Innovation Authority for two new programs that will further strengthen economic development ties between the state and Israel. And Empire State Development, New York’s economic development agency, will sign a Declaration of Intent with the Israel Innovation Authority to cooperate on the co-development and commercialization of innovative solutions in the fields of cybersecurity, supply chain, smart cities, energy, unmanned aerial vehicles, life sciences and other areas.

As part of the agreement, New York State and Israel will establish a Smart Cities Innovation Partnership, a new initiative that will share innovative technologies, research, talent and business resources between cities in New York and Israel. The Governor also announced that New York State’s Hot Spot and Incubator programs will now implement a new focus on Israeli companies that want to invest in the Empire State.

The Israel Innovation Authority will also identify locations to test smart train technology, to fund shared incubator space and programs for both Israel and New York, join research and developers, and make space in 10 “hotspots” around New York State for Israeli companies.

All of this growth is enticing other Israeli companies to open offices in the city. Among them is Ideeza, an automated product development platform powered by artificial intelligence that promises to produce customized products automatically.

“For us, the only option is New York,” said Moran Bitton, CEO and founder of Ideeza, which is based in Netanya. “It’s a global market and it gives us access to global investors. There are more and more flights from Tel Aviv to the U.S. and the time difference is not unbearable. We are now in New York raising $2 million.”

“Today if you want a product, we go to Amazon and buy it,” he said. “If you close your eyes and imagine 10 years from now, each one of us will open the Internet, click on a description of what you want, and voila, you will have the product … in minutes. We are the first ones in the world doing this.”

Among the new Israeli start-ups here is Airbud, a voice platform that allows enterprises to add voice and chat capabilities to their websites and mobile apps. It was founded by Israel Krush and Rom Cohen.

“We use out-of-the-box solutions to help companies interact better with their [website] visitors,” Krush explained. “We enable this type of interaction for any organization, no matter how complex.”

Thus, he said, although Amazon’s Alexa is able to understand and perform basic tasks, his company is developing a system that will allow visitors to schedule an appointment with a physician, and answer such questions as, “How do I file a tax return?”

“Since January, the system has been doing test runs with some big enterprise clients, including some Fortune 500 companies,” Krush said. “We are here for the long run. We are at the stage where machines can understand us as humans, and we are not bound by interfaces to bridge the gap between machines and humans. Your keyboard is now your bridge; your voice will now hopefully be the bridge.”