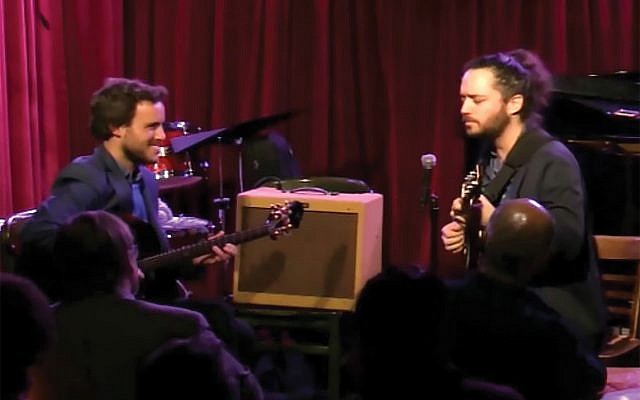 With the sudden shuttering of Greenwich Village’s Cornelia Street Café, which had become a home away from home for scores of young Israeli jazz musicians here, the two curators of the club’s monthly “Israeli Jazz Spotlight” are looking back, and ahead. Since the mid- to late-1990s, jazz musicians from Israel — carrying with them the exotic rhythms of the Middle East and a penchant for lyricism — have animated bandstands all over the city. Along the way, some of them — clarinetist-saxophonist Anat Cohen, bassist Omer Avital and guitarist Gilad Hekselman — have become big names.

Even though Cornelia Street, which opened in 1977, was not strictly limited to jazz, it occupied a unique spot in the city’s jazz ecosystem. By giving a stage to a diverse sampling of musicians with an Israeli heritage in common, “Spotlight” nurtured its own distinct ethno-musical phenomena, said Israeli-American guitarist Nadav Remez, the series’ most recent curator. “There are a lot of [Israeli] jazz musicians who incorporate too many diverse influences — ethnic, indie, rock — all kinds of things that simply would not fly in the more traditional jazz venues,” such as Smalls or Mezzrow, he explained in a phone interview. “All these musicians who didn’t fit in, whose various styles forced them into the outer boroughs and more peripheral venues, came together [in Cornelia] under the umbrella of an ‘Israeli jazz community,’ a title which unified them without actually forcing anyone to fit any kind of stylistic criteria. … It made for the growth of something new.”

This being a column about Israelis, a certain contrariness inevitably seeps in. And so for bassist Or Bareket, the series’ original curator, who held the post from its launch in 2016 until last August, Cornelia Street may have become too orthodox, so to speak.

“It was a stage for Israeli-born artists, and for a certain musical aesthetic that has already been evolving over the past two decades,” he told me. “But in my eyes, it failed to evolve anything new. If anything, in many cases, it allowed people to stay in their comfort zone and continue to produce the same type of commercially-tested sound, with the same group of people they knew from home.”

Bareket then got to the heart of musical influence. “What does it mean for us, as Israelis, to deal with an Afro-American musical tradition, which originated from blues, swing, bebop, from a specific history and culture? If you come to New York to play jazz and your main references are Omer Avital and Gilad Hekselman, it seriously limits the depth of your music.”

Whatever Cornelia Street’s role turns out to be, both Remez and Bareket sense that the Israeli-American jazz scene has reached a crossroads; it won’t surprise you that they disagree on where the music is headed.

One constant, though, has been the unparalleled institutional support Israeli-American jazz musicians enjoy. The partnership between the Manhattan New School’s jazz department and the Conservatory of Tel Aviv allows for credit transfers and a semi-automatic student visa, and there is financial and promotional backing from the Israeli Consulate and the America-Israel Cultural Foundation. It has all led to a flood of Israeli jazz musicians here; Remez, just by running through the names he and his friends knew, came up with a list of more than 200 jazz players here.

What does the future hold?

Remez sounded entrepreneurial, not unlike a typical Israeli. “Israeli jazz in New York is a little like Israeli high-tech in Silicon Valley,” he said. “We’re not just influencers, we’re leaders. We should own up to that, and come together to organize funding, festivals and opportunities to play that recognize us as a group.”

Now that Cornelia has closed, he continued, “there’s a need, an opportunity …  to replicate what this series was doing in the micro in a bigger way and come together as a community, as a brand.”

Bareket sounded like a musician trying to avoid a cultural trap.

“Cornelia was a special place for the entire jazz community, not only Israelis,” he noted. “But I don’t think Israeli jazz musicians here needed, or benefitted from, their own umbrella to grow under. There is a sort of cycle that musical movements go through. Something new and exciting emerges, catches on, becomes a trend, and the trend grows until it eventually becomes a cliché.” While the city is home to many singular Israeli-Americans musicians, “as a group I feel we are touching upon that point,” he noted. The way to avoid it “is for each musician to follow their own authentic road … to dig deeper.”

Born in Israel to an Argentinian mother and an Israeli father, with grandparents hailing from Tangier, Baghdad, Buenos Aires and Eastern Europe, Bareket said that for him, jazz serves as a sort of cultural anchor. “It’s a way to bring all the different parts of my heritage together. At its best, jazz allows you to make a place for yourself in it by respecting and observing the musical tradition you’re coming into. … It’s like understanding your own place in history.”