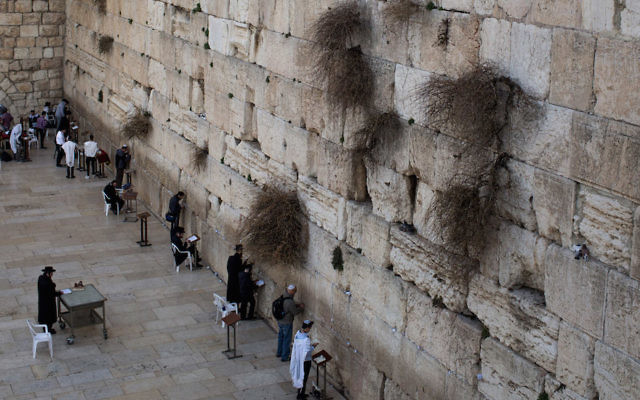 People praying at the Western Wall in the Old City of Jerusalem, Jan. 17, 2017. (Chris McGrath/Getty Images)

JERUSALEM (JTA) — The government of Israel told the nation’s Supreme Court that it plans to expand and upgrade a space for non-Orthodox prayer at the southern section of the Western Wall near Robinson’s Arch.

The government made the declaration in documents submitted to the court in response to a petition filed by the non-Orthodox Jewish movements and the Women of the Wall group that calls on the state to create the permanent space for egalitarian prayer at the Western Wall.

Haaretz reported that the government also asked the court to dismiss the case, since it has frozen an agreement that would have provided the permanent prayer space, equal access to the site from the Western Wall plaza and allowed the liberal groups to administer the area.

The Prime Minister’s Bureau already has allocated the more than $5 million needed to upgrade and improve the non-Orthodox prayer space, and said it will take 10 months to complete.

The Supreme Court is scheduled to hear the case on July 30.

“We are not buying the substitute Kotel Agreement that the State is trying to sell to the Supreme Court,” Anat Hoffman, chairperson of Women of the Wall, said in a statement issued after the documents were filed. “We hope that the Supreme Court will insist on our right to receive a prayer plaza in which we can pray according to our custom, whether by full implementation of the agreement, or by re-dividing the current prayer plaza into three sections: men’s, women’s and egalitarian.”