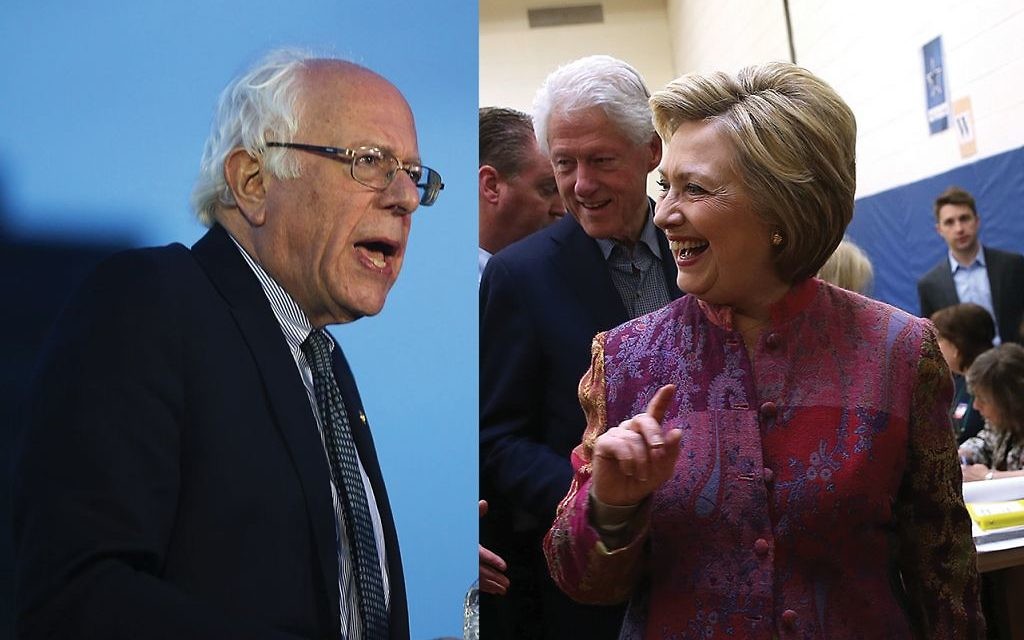 The divide in American attitudes towards Israel became most pronounced last week during the Democratic presidential debate in Brooklyn, when Vermont Sen. Bernie Sanders criticized Israel – and his supporters cheered.

It was on display again Monday evening when Vice President Joe Biden told the J Street convention: “I firmly believe that the actions that Israel’s government has taken over the past several years — the steady and systematic expansion of settlements, the legalization of outposts, land seizures — they’re moving us, and more importantly they’re moving Israel, in the wrong direction.”

He added that he found “no political will” by either Israelis or Palestinians “to go forward with serious negotiations.”

Such comments are a reflection of the “political space” J Street has opened both for “candidates and officials to speak their mind and the truth as they see it instead of just mouthing empty slogans,” according to Alan Elsner, special adviser to the president of J Street, which bills itself as pro-Israel and dedicated to promoting a two-state solution.

Rabbi Sara Luria, a Sanders supporter who spoke Sunday on a social justice panel organized by the Sanders campaign, said she was happy to hear the senator’s debate comments, including his call for the treatment of Palestinians with “respect and dignity.”

Rabbi Luria noted that this is a discussion that is going to continue beyond the election.

“Whether he wins New York or not, he is amplifying the voices of people who have not had their voices amplified,” she said, referring to the more progressive voices in the Israel debate.

Rebecca Vilkomerson of Brooklyn serves as executive director of Jewish Voice for Peace, considered by many to be outside the pro-Israel tent for its support of the BDS movement. She believes there are a growing number of Jews who share her group’s views but that “as the polarization [in the community] intensifies, the animosity towards us is becoming stronger and stronger.”

Some mainstream Jewish leaders took issue with the Sanders charge that Israel’s military action against Hamas in the 2014 Gaza war was “disproportionate” and that peace efforts were one-sided in Israel’s favor.

Jonathan Greenblatt, national director of the Anti-Defamation League, said he was “disappointed that the senator didn’t note that the reason for the conflict in Gaza is that Hamas it a terror organization committed to Israel’s destruction.” He said also that he was surprised Sanders “did not seem to grasp the fact that U.S. foreign policy has always attempted a fair and balanced approach to achieve a two-state solution to end the [Israeli-Palestinian] conflict.”

A former chairman of the Conference of Presidents of Major American Jewish Organizations, Seymour Reich, said he has found a growing divide on Israel among young American Jews and Americans as a whole.

“Israel is losing support and the cheering of the crowd [at the debate] reflects that,” he said. “Clearly, it was a partisan crowd, but there is something wrong out there and the Israeli government and the Israeli people don’t understand it. This should be a wakeup call.”

Reich pointed out that Israel has long enjoyed bipartisan support in Congress but that “a cleavage is emerging in the Democratic leadership that is reflected by Sen. [Patrick] Leahy’s letter” to Secretary of State John Kerry asking him to investigate claims that Egypt and Israel practiced “gross violations of human rights” and used alleged “extra judicial killings” in dealing with Palestinian demonstrators and terrorists.

Co-signed by 10 Democratic House colleagues, the letter was sent in February and asks Kerry to determine also whether American military aid to both countries should be cut.

David Halperin, executive director of the dovish Israel Policy Forum, attributes part of the decline in support for Israel among Democrats to Prime Minister Netanyahu’s speech in Congress last year that appeared to have been orchestrated with Republican leadership. It sharply criticized the then-proposed Iran nuclear deal and angered President Obama.

The incident “created space for many Democrats to reject Bibi [Netanyahu] as a partisan issue, and that is disconcerting to American Jews who have long supported a strong Israel alliance rooted in bipartisanship,” said Halperin.

“I don’t think this is an issue that is going away,” he added.

Reich said he is concerned that “Israelis seem complacent” about the split that has developed, and added that it “will sharpen after the election, regardless of whether Sanders, Clinton or Trump” is elected.

“The American people and the Jewish community are losing patience with the right-wing Israeli government,” Reich added.

But David Harris, executive director of the centrist American Jewish Committee, countered that Israelis are simply exercising their democratic right to vote in choosing Netanyahu, whether we like it or not.

“That is the nature of democracy, and trying to change the situation from the outside is very unlikely to work, any more that it would be for those who have told us at the AJC how much they wished for a different electoral process this year in the United States,” Harris said.

He dismissed the suggestion that there is a growing divide in Americans’ support for Israel, citing Gallup and Pew Research surveys that have found support for Israel and the U.S.-Israel relationship to be unchanged.

“What has changed is that those who have deep qualms are being given more visible platforms to express them,” he said. “It is not as if there were never fierce critics of Israel in the United States. There always were. But suddenly there are new opportunities for them to be noticed and emerge. It is not the numbers but the visibility” that has changed.

“The strength of the authentically pro-Israel community in my view is undiminished and will continue to manifest itself,” he added.

Malcolm Hoenlein, executive vice chairman of the Conference of Presidents, said he believes many Americans are getting “caught up in the propaganda of the Palestinians, who are completely distorting the facts in the media” and on college campuses.

He cited as one example the barrage of anti-Israel resolutions coming from the United Nations.

“No other country comes close — not Syria, not Iran or other big violators of human rights,” Hoenlein said.

Jonathan Sarna, a professor of American Jewish history at Brandeis University, noted that liberal parties in Europe, Canada and Australia “turned on Israel” some time ago.

“America was the exception,” he said, and people attributed it to “the power of Jews in the Democratic Party.

“What we are seeing here is Bernie Sanders saying things similar to what we have heard on the left in all of those places. The wonder is that it didn’t happen earlier.”

Morton Klein, president of the hawkish Zionist Organization of America, says he is worried about the Democratic party’s “increasing hostility towards Israel,” following a series of meetings he had with a number of Democratic leaders in recent days.

He noted that while Secretary Hillary Clinton refuted Sanders’ criticism of Israel during the debate, she opposes West Bank settlements.

“I’m worried that the strong criticisms of Israel that Obama has inspired for eight years will continue,” Klein said. “I’m concerned that Obama may refuse to veto U.N. resolutions critical of Israeli settlements and supportive of Palestinian statehood.”

Rabbi Sharon Kleinbaum, spiritual leader of Congregation Beit Simchat Torah in Manhattan, a home to many gay and lesbian Jews, said “the American Jewish community is not monolithic, and I believe many organized Jewish institutions are not in touch with what many American Jews feel.”