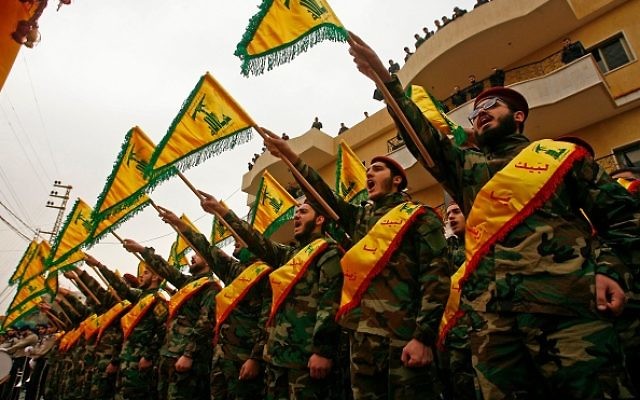 Fighters of the Shiite Hezbollah movement attend the funeral of a comrade who died in combat in Syria in March 2017. Two men were arrested in Hezbollah plot in the US yesterday. Getty Images

Israel has been secretly providing aid to Syrian rebels on the border in the Golan Heights for several years, The Wall Street Journal reported.

The aid includes cash, as well as food, fuel and medical supplies, the newspaper reported in an article that first appeared on its website Sunday night,  which cited interviews with about half a dozen Syrian fighters.

The Israeli army is in regular communication with rebel groups and its financial assistance helps pay the salaries of fighters and buy ammunition and weapons, according to the report. In addition, Israel has established a military unit that oversees the support in Syria.

Syria has been involved in a civil war between rebels and the military loyal to President Bashar Assad since 2011. The civil war has sometimes spilled over into Israeli territory including errant fire between rebels and Syrian troops. Israel’s military has responded when rocket and artillery fire from the fighting has landed on Israel’s side of the Golan Heights.

Israel has acknowledged treating thousands of Syrians injured in the civil war, both on the border and in hospitals in the north of the country, as well as providing some humanitarian aid to civilians living near the border, including food and clothing.

Israel’s military neither confirmed nor denied the Wall Street Journal report, telling the newspaper that the Israel Defense Forces is “committed to securing the borders of Israel and preventing the establishment of terror cells and hostile forces … in addition to providing humanitarian aid to the Syrians living in the area.”

The fighters interviewed for the story told WJS reporters that the Quneitra-based group Fursan al-Joulan, which means Knights of the Golan, is the main rebel group coordinating with Israel, which first made contact with the Israeli military in 2013 when Israel cared for some of its fighters. Its spokesman told the WSJ that “Israel stood by our side in a heroic way,” and “We wouldn’t have survived without Israel’s assistance.”

Israel, which captured and annexed the Golan Heights in 1967, reportedly is concerned about a permanent Iranian and Hezbollah presence at its border under Assad, and that Iran would transport weapons to be used against Israel to Hezbollah  military bases in southern Lebanon and the Syrian side of the Golan. Israel has in recent years bombed such arms shipments, leading to accusations it was involving itself in the civil war.