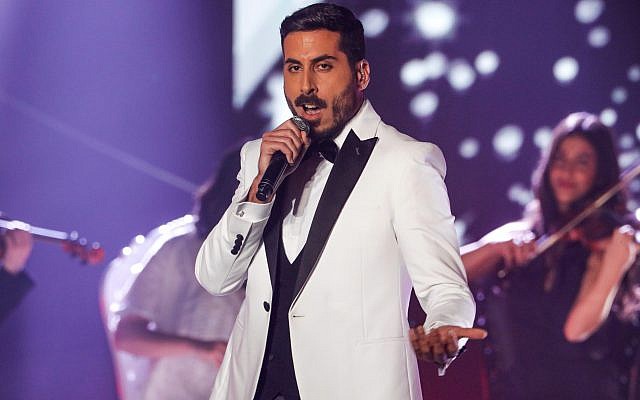 Israeli singer Kobi Marimi performs during the reality TV show "The Next Star for Eurovision." Marimi was announced as the country's representative to the Eurovision Song Contest after winning in the TV show. MENAHEM KAHANA/AFP/Getty Images

The 64th annual Eurovision Song Contest, a song competition primarily between countries in Europe, is set to take place in Israel beginning on May 14th. Each of the competing countries submits an original song to represent their country in the international contest, and as the winner of the 2018 competition, for Netta Barzilai’s “Toy,” Israel has the honor of hosting this year’s contest at the Tel Aviv Exhibition Ground.

There has been a lot of negative feedback about Israel’s song choice this year: “Home,” written by Ohad Shargai and Inbar Weitzman, and recorded by Kobi Marimi. Many feel that the song’s lyrics are unoriginal and the accompanying melody is too slow. Personally, I agree with them. The chorus of “Home” focuses on the feeling of being someone who is important, yet the lyrics are still uninspiring. The song is a tranquil, ballad-like tune that may draw the listener in, but In my opinion, does not have what it takes to win the Eurovision contest.

“Toy,” the winner of last year’s contest, has a message, something “Home” is lacking. When I first heard “Toy,” I found myself captivated by the fast-paced beat of the song. Upon further examining the lyrics to the song, however, I was also intrigued by the song’s message of female empowerment. This applies to me, a young Jewish woman, living in a society that is very male-dominated. Every day, women must fight gender stereotypes and bias. Throughout the song, Barzilai records chicken noises that both enhance the rhythm and the meaning of the song. The noises are reminders of the teasing she endured as boys made comments about her heavy appearance. “Hey look at me,” is repeated throughout the song to emphasize that she has a message to deliver. Barzilai is not ashamed of her size, nor of her unwillingness to stand up against societal norms. The rhythm and the lyrics combine to exude strength and determination.

In “Home,” however, the trite and random phrases leave the listener wondering what the song is really about. In fact, the song makes me wonder if Marimi is saying that he is only someone because he has found someone or something else. Is that the message that my peers and I should take away from the song? What a contrast to last year’s empowerment message. Or, is the ‘home’ in this song Israel? Is coming home about finding your place in Israel? One could understand the lyrics this way too, but for obvious reasons, the Eurovision Song Contest has strict rules which forbid any song from containing political messages. So, maybe it isn’t about Israel.

When listening to “Home” in my school’s Israel Culture Club, my friends and I were disappointed. After hearing “Toy” and embracing its message, however, we looked forward to hearing another winner, a song that embraced either Israel’s culture, a culture we know and love so much, or one to which we can learn more about and connect to. One of the great things about Eurovision is that it brings so many different countries together to share a love of music, but I believe that “Home” neither embraces Israel’s unique identity nor creative artistry. While Kobi Marimi sings it beautifully, we expect better.

Sarah Horvath is a sophomore at Abraham Joshua Heschel High School in Manhattan.