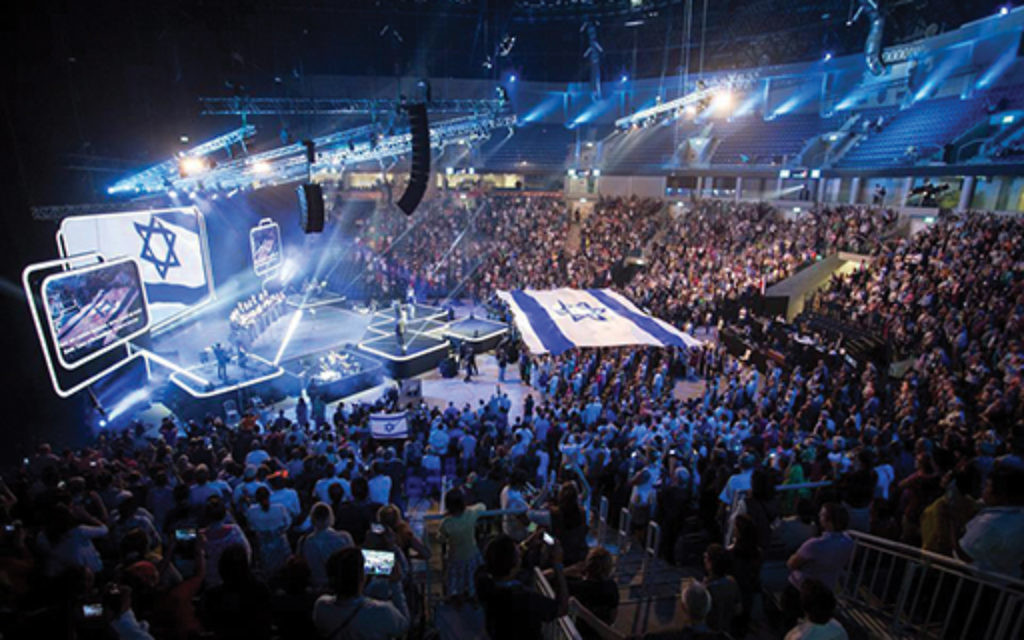 B lack lights and sensational music. Dancing. Prayer. Charity. A march of thousands of colors from more than 80 nations — a march in solidarity with Israel. In essence, it’s Jerusalem’s Christian Zionist Super Bowl.

Such was the scene last month at the 36th annual Feast of Tabernacles conference and celebration, hosted by the International Christian Embassy Jerusalem (ICEJ). The five-day event, which ran through Oct. 1, brought more than 5,000 people to the Israeli capital, including more than 50 pro-Israel Christian parliamentarians and government officials from more than two-dozen countries. Several African nations sent a large delegation of cabinet ministers and members of parliament (MPs) to officially represent their countries.

According to Dr. Jurgen Buhler, executive director of ICEJ, the median age of attendees was between 30 and 40. The weeklong festivities mark Israel’s largest annual event for tourists and the largest solidarity mission to the Jewish state this year, injecting an estimated $16 million into the Israeli economy.

In a video speech Sept. 29, Israeli Prime Minister Benjamin Netanyahu praised the Christian Zionist attendees for their “unfaltering, enthusiastic support [of Israel] over the years.”

“Israel has no better friends around the world,” he said.

Similarly, Jerusalem Mayor Nir Barkat said, “Not everyone in the world seeks the best for Jerusalem. There are people that challenge our history. Sometimes, we feel alone. … Your friendship is warming our hearts. I want to thank you for your prayers and your unprecedented support and passion.”

In fact, one such evangelical group alone, the Chicago-based International Fellowship for Christians and Jews, led by Rabbi Yechiel Eckstein, raises about $150 million a year from 1.5 million donors.

In a speech at the event that pulled heavily from the Torah, Israeli President Reuven Rivlin spoke to thunderous applause. He said his Jewish ancestors of 2,400 years prior could not have envisioned the ingathering to Jerusalem of Jews from around the world — from Russia, Ethiopia, North America, Morocco, to build farms and villages and make the desert bloom.

“Yes, my dear friends, the return to Zion is not just the redemption of the Jewish people alone. It should give hope to all mankind. Indeed, it would change the world. … Thank you for standing with us. Pray for the people of Jerusalem — may it prosper. God bless,” said Rivlin.

The focus of this year’s Feast was “The Evangelical Revolution and its Potential for Israel,” and conference sessions honed in on the impact rising evangelical support could have on the Jewish state — politically and economically.

According to an ICEJ backgrounder, among the estimated 2 billion Christians in the world today, as many as 700 million are considered evangelicals, and it is the fastest-growing stream of Christianity. If current trends continue, there will be an estimated 1 billion Evangelicals within the next 20 years.

“This all holds great potential for the nation of Israel in political, diplomatic, and economic terms, as a substantial majority of evangelical Christians tend to hold favorable views of Israel,” ICEJ said in a statement.

Evangelical Christianity emerged out of the Protestant Reformation in Europe in the 16th century. When Martin Luther translated the Bible into common German (and others later into other common languages), it allowed Christians to discern for themselves whether official church teachings were truly aligned with God. Many of these nascent church movements also rediscovered the individualist experience of being “born again,” the hallmark of evangelism today.

Rev. Dennis Balcombe, the longest-serving Western evangelical missionary to China, explained that a movement of underground evangelism in China that grew from a few-thousand faithful some 45 years ago now boasts an estimated 130 million followers.

“There are more Christians in China than in North America,” Balcombe said. “China’s doors are opening. The Lord said, ‘Behold, I have set before you an open door.’…The people of China are tired of Communism or persecution, of being beaten by the police, of prison. Now, many leaders are turning to Jesus Christ.”

It is estimated that 30 percent of China will be evangelical within 30 years.

In India and Africa, too, the evangelical movement has taken root. According to Dr. Vishai Mangalwadi, India is now home to more than 100 million Christians. Within 20 years, India is likely to be 20-percent Christian.

The most dramatic growth in the evangelical movement is occurring within what some call the “Global South”—Latin America, Africa, and Southeast Asia. The continent of Africa alone has seen a dramatic increase in Christian identification, from 10 million Christians in 1900 to 493 million in 2010. The projected growth in Africa is expected to exceed 1 billion evangelical Christians by 2050.

How has this happened? According to Nanasso Amina, a Feast of Tabernacles delegate from Cameroon, the vehicle is “friendship evangelism.”

“We win their confidence and then present Christ to them,” she told JNS.org.

This “friendship evangelism” was the impetus for a controversial statement by Israel’s chief rabbis shortly before the ICEJ-hosted Feast. In a letter dated Sept. 3, Ashkenazi Chief Rabbi David Lau and Sephardic Chief Rabbi Yizak Yosef accused the annual celebration by evangelical Christians in Jerusalem of being an effort to convert Jews to Christianity. They called the event “spiritually dangerous.”

Like the rabbis, Ruth Guggenheim — executive director of Jews for Judaism, an organization that seeks to counteract proselytizing — was wary of the Feast’s intentions, saying, “There is a tremendous power in being immersed in their prayer services. ‘Davidic dance’ programs and various workshop festivities can be very seductive and overwhelming.” She added, “All one needs to do is Google ‘Messianic Judaism Israel’ and you will see the level of sophistication and number of [websites] directly targeting Jews for conversion.”

But David Parsons, ICEJ’s media director, countered Guggenheim’s assertion by explaining that evangelicals make up less than 1 percent of Israel’s population and that their missionary activity mainly target the Muslim-Arab population.

Dr. Naim Khoury, a pastor in Bethlehem, said he has seen more “Arabs and Palestinians open to the Gospel” in recent years. He noted that conversions to Christianity need to take place covertly and that most individuals who chose faith in Jesus leave the disputed territories for abroad, where they can live freely. He noted that when a Muslim chooses Christianity, it is often based on a spiritual reflection.

“They reflect on what is happening in the Middle East, the terrorism, and they question their faith,” he said.

Leading up the Feast, ICEJ responded to the chief rabbis’ letter by stating that the organization “has always respected and upheld the laws of the State of Israel, including those covering missionary activities, and it is regrettable that the Chief Rabbinate acted solely on the misrepresentations of those bearing false witness against us.”

Former Knesset member Rabbi Dov Lipman, who spoke at the Jerusalem conference, said he has learned over the years that Israel is not only isolated, but doesn’t have many friends around the world — and that it has found a stalwart friend in the evangelical community.

“I believe that the way Israel can win in the public diplomacy war in South America, Africa, Europe” is to engage the Christian community, “and we have to embrace that relationship,” said Rabbi Lipman.

In Rabbi Lipman’s estimation, Jews have the right to be both “suspicious” and “skeptical” of evangelical support. But “if we pull away from that and focus on what we share, this could be the most important relationship for Israel,” he said.