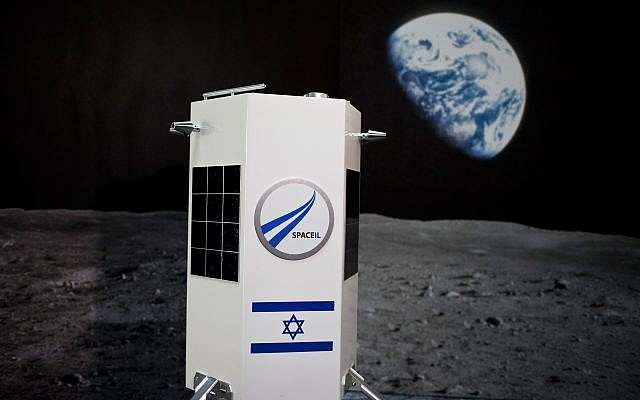 A prototype of a nano spaceship is displayed during a press conference held by Israel's Space IL organization back in 2011. Getty Images

On Feb. 21, 2019, Israel launched its first spacecraft named Beresheet, translated as “In The Beginning” in Hebrew, to the moon from Cape Canaveral, Florida. In doing so, Israel joined a small group of countries that have sent unmanned spacecraft to the moon, including, Russia, the US, India, Japan and China. The nonprofit organization, SpaceIL, built the spacecraft and expect it to land on the moon’s surface on April 11. If the mission is successful, Beresheet will be the first commercial vehicle to reach the moon.

The spacecraft was originally built to compete for the $20 million Google Lunar XPRIZE, but the contest ended before they announced a winner. The organizers and builders of the spacecraft decided to continue their project with the help of donations, building a small, $100 million spacecraft. As a result of their limited funding, a mission that generally only takes two to three days will now take two months. Beresheet will only go up to the Earth’s surface, then its rocket will separate and the lander will spend seven weeks traveling in space to gain the velocity necessary to land on the moon. Beresheet will provide high-resolution images of the Earth and moon. It is equipped to measure the moon’s magnetic field, study lunar craters and carry a NASA laser retro-reflector array. Scientists hope to use this data to further study how the moon was formed. It also carries a time capsule, containing artifacts such as a Holocaust survivor’s story, Israeli songs and a picture of Ilan Ramon, the Israeli astronaut who died on his 2003 mission to the moon aboard the Columbia spacecraft.

While the mission has been cause for celebration, there have been some drawbacks for Bereshit. On Friday, Feb. 22, Beresheet encountered an issue with orienting itself due to glare from the sun, which caused difficulties for the spacecraft to follow the path of the stars and position itself in orbit. However, this became a minor problem that the crew was able to overcome. They encountered a second problem when Beresheet’s computer system suddenly restarted, preventing the spacecraft from entering the Earth’s orbit for when they had initially scheduled. But ground control solved the issue and the spacecraft remained on its path.

There are still potential challenges for the spacecraft. Eran Schmidt, Deputy Project Manager of SpaceIL and Head of Ground Operations, admitted that “The landing itself is a huge, huge test. We are going to send a command to the spacecraft to start (descending) and afterward we will have 20 minutes when everything will work autonomously. So we need the sensor measurements to be good, the control system to act properly and we hope that we will not land in the middle of a crater on a rock.” Tal Inbar, an expert in this field, added that “Each day that the spacecraft moves towards the moon, the dosage of radiation from the sun and from cosmic (sources) is higher and higher. After a successful landing, the main challenge will be the heat. The spacecraft won’t (be operational) for long on the surface of the moon because it was not built to withstand the extreme temperatures there.”

SpaceIL released a selfie of the spacecraft orbiting Earth, and in the background, Earth is clearly pictured with a plaque below that reads “Small Country, Big Dreams, עם ישראל חי” (the nation of Israel is alive). Expressing great pride for his country, Yonatan Winetraub, co-founder of SpaceIL announced that “We thought it’s about time for a change, and we want to get little Israel all the way to the moon.”