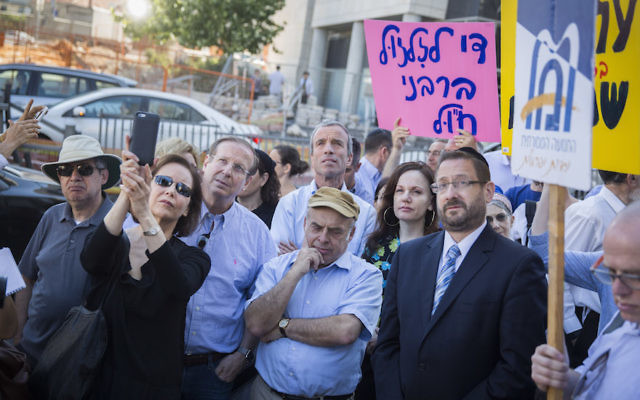 Jewish Agency Chairman Natan Sharansky, center, in brown cap, and Knesset member Dov Lipman, in jacket and tie at right, at a protest held by American and Israeli Orthodox and Conservative Jews outside the Chief Rabbinate offices in Jerusalem, July 6, 2016. (Hadas Parush/Flash90)

The strained relationship between diaspora Jews and Israel has reached a breaking point, assisted by a perfect storm of four concurrent events:

The release of the Brand Israel study, which revealed a dramatic decrease of support for Israel among American Jewish young adults, especially among college students, where support is down 32 percent since 2010.

The Israeli cabinet’s repudiation of the Western Wall agreement, which along with pending legislation on conversion — now, under pressure from American Jewish leaders, delayed for six months — has further alienated many diaspora Jews.

The announcement that two influential American rabbis with Conservative training will perform intermarriages, a move deemed necessary by many in the diaspora but equated by many Israelis to a second Holocaust.

The ongoing Trump saga. Nearly three-quarters of American Jews voted against a guy that, according to a new poll, more than 80 percent of Israelis support.

All of this, and I didn’t even mention two states vs. one state, settlements and Ayelet Waldman.

While some Jewish leaders are recognizing the urgency of the moment, few are acknowledging how precariously close we are to a permanent rupture.

“The Israel-diaspora relationship has itself become a tale of two teams increasingly unable to share the same narratives or acknowledge the same basic truths.”

That’s because the Israel-diaspora rift has gone tribal.

Pundits bemoan the tribal nature of American culture, where our politics have devolved into a maelstrom of conflicting news channels’ social media feeds, generating unyielding allegiance to the “home” team, even when that team is doing verifiable damage to the country. While the Israeli political system has been, to a degree, a tribal enterprise since the earliest days of Zionism, somehow, through it all, Israeli society has been able to pull together at the time of greatest need. The jury is out as to whether that can happen in America, but what is clear is that the Israel-diaspora relationship has itself become a tale of two teams increasingly unable to share the same narratives or acknowledge the same basic truths.

The last time Israelite tribes tried to unify, it did not end well. King David’s empire was ripped apart only one generation after reaching the height of its glory. The 10 northern tribes of this united kingdom summarily Brexited, driven away by their own ambition and the excesses of the just-departed King Solomon. Jerusalem ceased being the nation’s capital for the northerners, and the two sides adapted different names, styles of worship and alliances. Ultimately both Israel and Judah suffered destruction and dispersion. As Solomon had discovered years before, a split baby is a dead baby.

Over the coming days, I’ll be taking a group on pilgrimage to Poland.  As we stand within the gas chambers where millions died, we’ll reflect on how it didn’t matter whether those who stood naked next to you were from France, Poland or Salonika, whether they were observant, secular, born Jewish or simply married to a Jew, or whether the rabbi who converted them was Orthodox, Conservative or Reform. Literally stripped of all differentiation, they were united by fear and fate. Even their multiplicity of languages melted into a single, universal, primal scream, accompanied by a muttered Hebrew Shema.

My group will be united in the understanding that we Jews have an obligation to transform disaster into an embrace of life and the relentless pursuit of dignity. As the last Shoah witnesses are dying off, we’ll resolve to take up their gauntlet. That’s a message that Jews everywhere can share, as long as it isn’t garbled in a cacophony of infighting.

How can we stop this tribal split from becoming permanent?

We can begin by forging a single, universally accepted definition of “Who is a Jew,” an expansive one that promotes peoplehood and transcends halachic differences. The most obvious definition for the post-Auschwitz era is the one that we already have, based on Israel’s “Law of Return.” Established in the aftermath of the Holocaust, the law states that those eligible for automatic Israeli citizenship would include “those born of a Jewish mother or converted to Judaism, plus their non-Jewish children, grandchildren, and spouses, and to the non-Jewish spouses of their children and grandchildren.”

“The Jewish people can become the first truly global citizenry, albeit one whose heart beats solidly in Zion.”

Those chosen for death in Auschwitz, the ones killed for having been deemed Jewish, have the right to be mourned as part of the Jewish nation. While each of the religious streams will seek narrower definitions of Jewish status following their understanding of Sinai’s revelation, from the perspective of peoplehood the Torah of Auschwitz, as embodied in the Law of Return, supersedes all else.

With that as our baseline, we can begin to forge a trans-denominational, post tribal and more inclusive Jewish people. In an interconnected world where globalization has obliterated boundaries, the Jewish people can become the first truly global citizenry, albeit one whose heart beats solidly in Zion. There could be no more powerful statement about what it means to be Jewish — or to have any national identity at all — in this indelibly singed post-Auschwitz era.

A century ago, the early Zionist essayist Ahad Ha’am, in his classic treatise, “The Wrong Way,” challenged both Theodore Herzl and the religious establishment by simultaneously affirming an enduring diaspora and the centrality of Zion as the heart of a renascent (and primarily secular) Jewish culture. Only an approach such as his, affirming the equality and mutuality of all Jews, whether they live in Jerusalem or Johannesburg, will enable us to unify the tribes of Israel.

In a recent article for JTA, I proposed a form of global Jewish citizenship, based on the Law of Return, to replace the unbalanced and dysfunctional Israel-diaspora relationship that has given rise to the current acrimony. Predictably, the headline writers focused solely on an aspect of my plan enabling qualified Jewish citizens in the diaspora to vote in Israeli elections, much as American-Israelis living in Israel can vote absentee in U.S. elections. My plan, which admittedly needs plenty of massaging, also seeks to address other underlying concerns, like conversion and intermarriage.