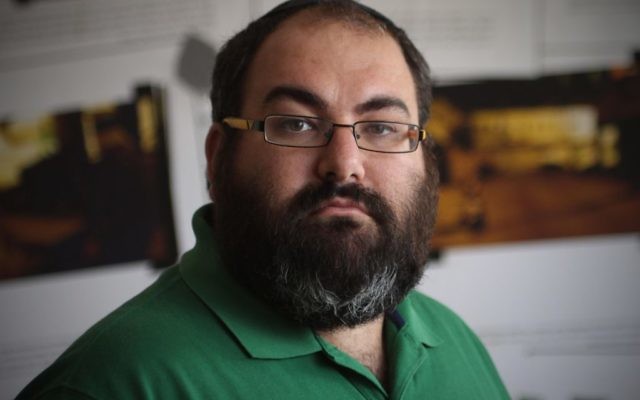 Last week, as I looked through the Jewish Week’s website, I found out that I have something in common with my justice minister Ayelet Shaked. In an interview published in The Jewish Week, Shaked told of the deep influence her military service in Hebron had on her worldview and her choice to lead her life as a politician. In 2001, as a young soldier, I spent my first tour of duty in Hebron. In total, I served as a soldier and commander in the city for about 14 months during the Second Intifada. Like Shaked, I learned lessons in Hebron that have guided me ever since.

Shaked tells of the tours she conducted for soldiers at the Cave of the Patriarchs, and of the importance of recognizing Hebron’s Jewish history in affirming that the land of Israel is ours in its entirety. I agree with Shaked insofar as recognizing and respecting the Jewish history of the city of Hebron. Though when I arrived there as a soldier, I discovered a divided city, with a majority of Palestinian residents, and a minority of a few hundred settlers. The area around Hebron’s old city was previously the commercial center, though it is now home to settlements guarded by Israeli soldiers.

The guiding principle of IDF activity in Hebron is this principle of separation, whose implementation is based on restricting the movement of Palestinians in parts of the city near the settlements. Following the massacre perpetrated by Dr. Baruch Goldstein on Purim in 1994, Israel began to impose permanent restrictions on Palestinian movement in areas near the settlement centers. These restrictions intensified upon the start of the Second Intifada, and led to the reduction of the original inhabitants of the city center by more than 40 percent over the years. Nearly 80 percent of the shops in this area of the city were closed over the last 20 years. Shuhada Street, one of the main commercial streets, was “sterilized” – meaning that Palestinian residents are not allowed to walk along it. The doors of Palestinian families who continue to live along the street have been welded shut to ensure that they are unable to access it.

Minister Shaked recalls when she “got to know” the settlers in the city. I, too, remember my encounters with them and their behavior. I was shocked that in the name of Judaism they would spray graffiti of the Star of David, next to which they would write things like “Arabs Out” on Palestinians’ doors. I couldn't help myself from thinking back on our own Jewish history, during times when similar words were written on the doors of our homes and storefronts.

I personally studied in a yeshiva in the settlements as a teenager, but my service in Hebron was the first time I encountered explicit violence by settlers against Palestinians. As time passed, I realized that not only are the settlers responsible for the reality in the city, but I, as a soldier, also had a critical role to play. As my comrades and I stood at our post at the entrance to the street closed to Palestinian foot traffic, we helped prevent civilians from moving freely about their city. These activities are not atypical; they have taken place, and are still taking place, throughout the West Bank. They are an integral part of five decades of military rule over a population that didn’t elect us to govern it, and is involuntarily under our control. The experiences my comrades and I underwent in Hebron led us to establish Breaking the Silence. Our objective was to share the orders that we carried out as soldiers in the name of Israeli society.

I agree with Ayelet Shaked that we need to acknowledge our history, but I’m not willing to allow it to blind me from seeing the reality in Hebron, or anywhere else in the territories. This, too, is a lesson I learned from Jewish history. One of the challenging lessons gleaned from Jewish history is drawn from the Bar Kochva revolt. Many people in Israel today recall the uprising as an act of heroism, though in doing so, they suppress its consequences: mass murder, exile, and destruction of the community remaining in the country after the destruction of the Second Temple. From the Bar Kochva revolt, I learned of the dangers of extremist messianic leadership, blind to the reality in which it exists, leading the nation toward disaster.

Anyone who thinks that Israel can indefinitely control Palestinians by force suffers from this blindness. And whoever fails to understand the connection between this ongoing control and the violence and fear that have returned to our hearts and streets in recent weeks, could lead us toward more severe disaster than that which we are already experiencing. Soldiers, like me, are now being sent to display the uncompromising force of Israel and the IDF to Palestinians. Even if this volatile tactic succeeds in quelling the violence for the time being, in the absence of radical changes, it will soon return. Periodic rounds of violence are an inseparable part of the Israeli right’s one-state vision, represented by Shaked. In order to prevent the next round of violence, in the name of our collective future in the region, we must acknowledge our leadership’s failures, and demand that we work toward ending the occupation once and for all.

Yehuda Shaul served as an infantry combat soldier and commander in the IDF, and is a founding member and co-director of Breaking the Silence.