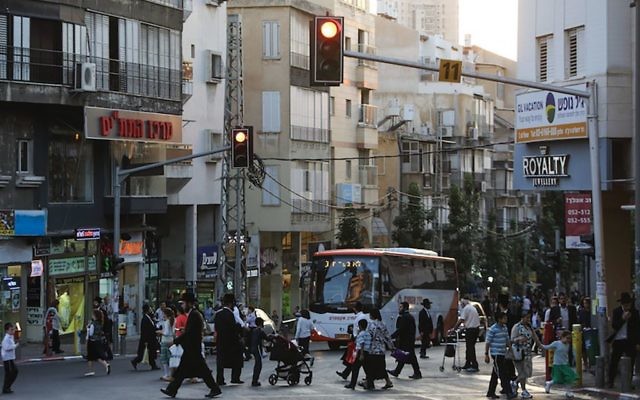 If current demographic trends hold, Israel in the next generation or two will look a lot like … Borough Park.

According to a government report to be released this week, the Jewish state’s population will double in about 40 years. Some 29 percent — or 5.25 million of its projected 18 million residents — will be charedi Orthodox Jews. That’s more than triple the current 9 percent.

The charedi population here is also spiking. Day school and yeshiva enrollment in New York jumped 4.4 percent in 2016, largely fueled by growth in ultra-Orthodox schools, according to a study last year by the Orthodox Jewish Public Affairs Council. The rise in day school and yeshiva enrollment from 2012 to 2015 was nearly 8 percent, according to the study. A UJA-Federation study from 2012 found that 4-in-10 Jews in New York now identify as Orthodox (the national figure is about 1-in-10), and, stunningly, nearly 7-in-10 Jewish children here are Orthodox.

And Pew’s “A Portrait of Jewish Americans” survey from 2013 found that Orthodox women bear more than twice as many babies as other Jews (4.1 vs. 1.7), with 48 percent of Orthodox women having four or more children, compared to just 9 percent of non-Orthodox women.

Orthodox Brooklyn neighborhoods may be crowded (in fact, many chasidic families have decamped to Rockland County as their population swells), but not like in the Jewish state. “Israel will have the highest population density in the Western world,” Sergio DellaPergola, a preeminent Israeli demographer and member of the report’s steering committee, told JTA. “Interestingly, charedim will overtake Arabs as the largest minority.”

The Central Bureau of Statistics revised upward its previous projection, made in 2012, that the population will reach 15.5 million in 2059, with 4.5 million charedim. DellaPergola said the bureau had wrongly assumed Israel’s fertility rate would continue to decline.

If this report proves accurate, Israel — with a land area of some 8,000 square miles — will be more densely populated than the West Bank and the Gaza Strip taken together are today. Some experts have warned of impending disaster, but DellaPergola said Israel still has room to expand outside its geographic center, the Tel Aviv-Jerusalem region, in what Israelis call the “peripheria,” or periphery.

“Israel has a huge area that is very underpopulated,” he said. “If you can distribute the population more equally across the periphery, density is not a problem. But I haven’t seen much strategy from the government.”

Gilad Malach, who analyzed the Central Bureau of Statistics report for the Israel Democracy Institute think tank, noted that other societies have proven able to adapt to high population density.

“It’s not necessarily a disaster,” he told JTA. “Singapore and Hong Kong are even more populated [than Israel is projected to be], and they are successful states. Great cities also function almost like states.”

Israel is growing rapidly mostly because of its birth rate, which DellaPergola said is the highest of the world’s 100 most developed countries, “some of which aren’t that developed.”

Once exceptionally fertile, Arab-Israeli women now have an average of 3.13 children, the same as their Jewish fellow citizens. According to the Central Bureau of Statistics report, Arabs will comprise 20 percent of the Israeli population in 2059, compared to the current 21 percent.

By contrast, after ticking downward when child subsidies were slashed in 2003, the charedi fertility rate has stabilized the past five years at 6.9 children per woman. Malach said the projected charedi population boom should be a “call to action” for Israel. He recommended the government, along with civil society, invest in charedi education and workforce integration, as well as rethink its large-family policies.