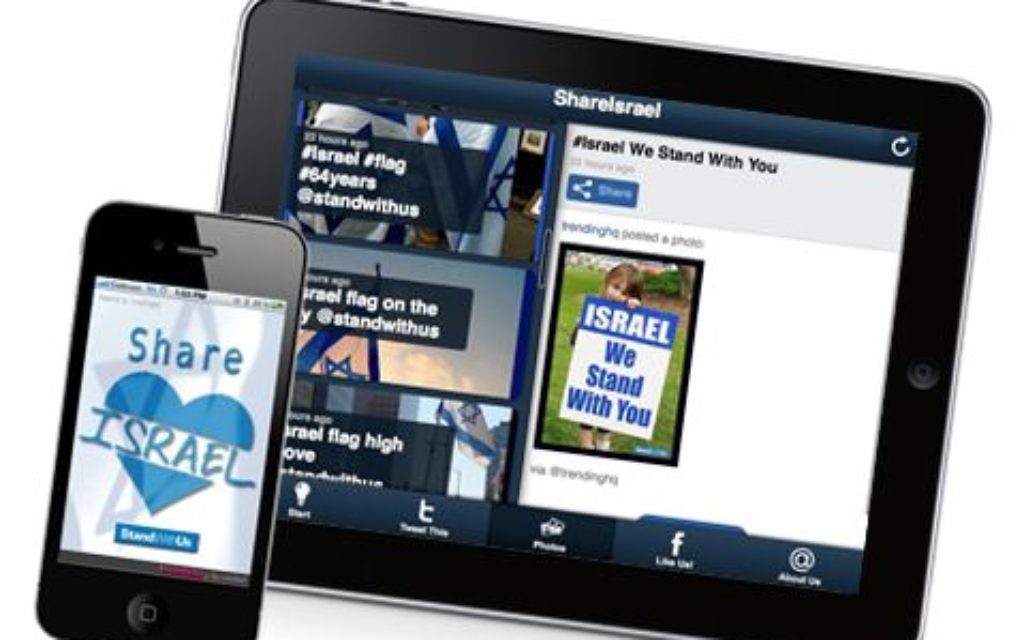 In response to a changing attitude toward Israel on college campuses, the Israel advocacy group StandWithUs lauched in 2001. Its goal was to serve as an informational guerrilla unit of sorts and work with established campus organizations like Hillel to combat anti-Semitism and anti-Israel propaganda. With calls for universities to divest from Israeli companies still occurring on campuses across North America, StandWithUs has found itself growing in recent years and working harder to reach more college students.

Recognizing the need to connect with these young adults through new technology, the organization has released a mobile phone app aimed to encourage this demographic to share positive information about Israel.
The new app, available for iPhones, Blackberry, Android, Windows Media and all major smartphones and tablets, is called 'ShareIsrael'. The app utilizes Israeli technology and allows the educational information and images to be shared widely through Twitter, Facebook and Email.
StandWithUs hopes to reach a wide audience with positive Israel content and to see it 'trend' online. The app launched April 27 in honor of Yom Ha'atzmaut, Israel’s Independence Day and has already received 3,000 hits from 25 countries. It can be downloaded from the website: www.ShareIsrael.com
“StandWithUs has always utilized the internet to make educational resources, materials and videos as widely accessible as possible. This new development will allow us to educate and reach out to even more people, more regularly”, commented StandWithUs CEO Roz Rothstein.
“Anti-Israel groups constantly use misinformation on social media to demonize and defame Israel. This app uses Israeli technology to maximize sharing, our new app helps people set the record straight via the content they share.” said Michael Dickson, StandWithUs Israel Director.
Israelis Omri Ariav and Alon Carmel created the app using a platform they designed called 'TrendingHQ'. Omri said: "We created TrendingHQ to help promote content around Trending topics in Twitter. During the anti-Israel Flotilla episode, there was no one place that users can go to and tweet about the truth of the situation. TrendingHQ aims to solve that problem. With TrendingHQ you can curate content around a trending topic in Twitter. Via the ShareIsrael app StandWithUs can now curate content around pro-Israeli hashtags on Twitter. I am proud that StandWithUs is the first organization to use this new system. It is an honor to work with StandWithUs since they are always cutting edge and we wanted to launch this app with them due to the leading role that they have played in representing Israel to the world.”
StandWithUs already operates websites, Twitter, YouTube and Facebook pages in English, Hebrew, French and Spanish and reaches an estimated 1.5 million people via online sharing and interactions each month. “We have long pioneered the use of social media in telling Israel’s story”, explains Rothstein. “In 2009, we established online ‘situation rooms’ to combat the stream of misinformation coming from anti-Israel groups during the IDF’s campaign against Hamas in Gaza. In 2010, we set up a multi-lingual website called ‘Flotilla Facts’ as a response to the Gaza-bound activist ships."
"All our efforts are backed up with a strong social media presence and this new application is an extension of that,” adds Dickson, “We are giving a new tool to those who love Israel and wish to be active on Israel’s behalf – and now it’s in the palm of their hands”. Within hours of the application's launch, it had already been downloaded to devices in the USA, UK, Australia, Canada and also Colombia, Norway and Bangladesh.
As the need for positive education and the dissemination of accurate information about Israel continues, StandWithUs remains in the trenches on college campuses. And with the thinking that it's important to meet the young students where they are, the move to mobile media is a critical step in this organization's mission.