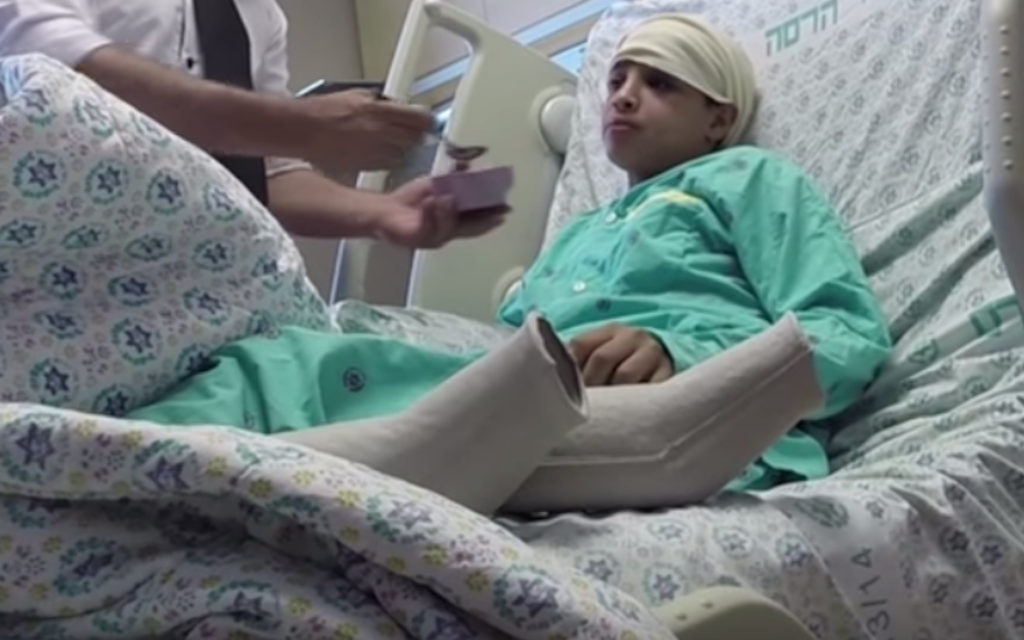 The boy, Ahmed Mansra of eastern Jerusalem, was seriously injured by a car as he attempted to flee from the scene of the stabbing of an Israeli 13-year-old who was riding his bicycle in the Jerusalem neighborhood of Pisgat Zeev. The Israeli boy is hospitalized in serious condition with multiple stab wounds.

Abbas made the accusation Wednesday evening in a publicly televised speech from Ramallah in which he also said, “Aggressive attacks are escalating against our people, land and religious sites.” The P.A. leader called for international intervention.

Abbas said that the Palestinians “will not agree to the continuation of the situation on our lands, nor to the policy of occupation and aggression of Israel and its settlers who are terrorizing our people, homes, trees, holy places and who execute our boys in cold blood, as they did with the boy Ahmed Mansra and other children in Jerusalem and other places.”

“We will continue our political, national and legal fight, and we will not remain tied to agreements that Israel does not respect,” he threatened.

Abbas accused Israel of trying to change status quo on the Temple Mount, an accusation that is seen as fueling the recent wave of Palestinian attacks against Israel.

“Al-Aqsa is our right as Palestinians and as Muslims, and no one else has a right there,” he said of the mosque on the Temple Mount.

Israeli Prime Minister Benjamin Netanyahu has said repeatedly that Israel has no plans to change the status quo on the Temple Mount, a site that is holy to Muslims and Jews.

“Abu Mazen’s comments last night were incitement and lies,” the Prime Minister’s Office said in a statement, using Abbas’ nom de guerre. The statement added that Ahmed Mansra is alive at Hadassah Hospital, where he is listed in light-to-moderate condition.

The government on Thursday released a video of the teen eating in his hospital bed. On Wednesday it released a video showing the teen and his 15-year-old cousin wielding knives as they chased after the Israeli boy on his bike. The cousin was shot dead by Israeli police after he charged at an officer.

“While Israel maintains the status quo on the Temple Mount, Abu Mazen, with his words of incitement, makes cynical use of religion and thus brings about terrorism,” the statement said.