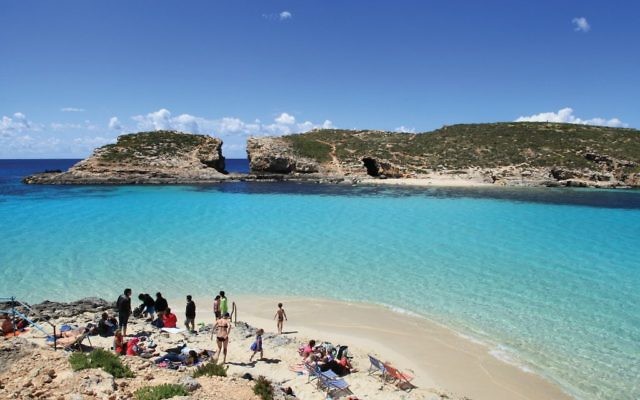 The Maltese option: A lagoon in Comino. Photos by Wikimedia Commons

Even in high summer, the Maltese islands Gozo and Comino are sleepy and unhurried, like twin lizards baking under the sun.

They are peaceful because most people haven’t heard of them. Gozo and Comino are two of the many reasons a sun worshipper might head to Malta, the tiny island nation that occupies a triangle of the Mediterranean between Sicily, Libya and Tunisia.

“Game of Thrones” fans are familiar with at least one aspect of Gozo: the Azure Window, a rock formation on its jagged coastline that formed a spectacular, 92-foot-high natural arch. Featured in the hit series, as well as in many movies, the Window collapsed in dramatic fashion during a storm earlier this year.

Even after the endless Twitter gifs that followed, Gozo — and Malta — remain afterthoughts for many vacationers. But with a language similar to Arabic and a cuisine similar to Italian, and a centuries-long Jewish heritage that threads through many Maltese families, Malta’s islands offer a beguilingly different slant on the Mediterranean.

There are no direct flights from the U.S. to Malta, but many airlines connect through Continental hubs to Valletta, the capital, which has a faded classical grandeur reminiscent of Rome.

Owing to a British colonial past, locals drive on the left, and English is thankfully an official language (Maltese is the only Semitic official language in the European Union). But nearly every Mediterranean civilization, from Phoenicians and Carthaginians to Byzantines and Moors, left its mark in some way over the years.

Jews, present since at least Roman times, have left their mark literally; a famous example is the Jewish symbolism found in the fourth-century Catacombs of St. Paul.

On the ancient walls that enclose most Maltese cities, Semitic vestiges include inscriptions in what were formerly Jewish quarters. Talk to the locals, and you hear about Jewish ancestors, surnames and even place names.

Over the centuries, the Jews of Malta came from lands as diverse as their neighbors: expelled Sephardim, exiles from France, escapees from Germany. But the most famous Jewish resident was the 13th-century Sephardic mystic Avraham Abulafia, a pioneering Zaragoza-born kabbalist who found refuge on tiny Comino.

Today the Jewish community numbers around 200, and exists mostly in the capital. A new synagogue was inaugurated a dozen years ago; Malta’s first Chabad center opened in 2013, welcoming visitors to the country’s only kosher restaurant.

From Valletta, ferries to Gozo and Comino are frequent and take less than an hour. Gozo, though tranquil and uncrowded, is more of a destination than Comino, which has only a handful of lodgings.

With magnificent Baroque architecture, lively outdoor fruit and vegetable markets and picturesque fishing villages dotting its coastline, Gozo is just developed enough to be a viable destination on its own for a week or so.

Victoria, in the island’s heart, is the only place of any real size. Also known as ir-Rabat, it has the feel of a southern Italian city. Visitors will want to tour its medieval citadel, with sweeping views over the sea, as well as the Neolithic temple ruins at Ggantija, a UNESCO World Heritage site.

But the best way to experience Gozo is to jump in a car (or on a bike) and explore the terrain, winding though landscapes alternately arid and verdant. Gozo is well known for its so-called red beaches; the peculiarities of minerals and salinity lend these sands a distinctive russet hue. In between, cliffs and caves give way to deserted coves and sleepy harbors where fishing boats bob in the sun.

Sheltered by obscurity from development and mass tourism, Gozitan villages feel deeply traditional and are a joy to stroll on foot. Every town boasts an imposing, ornate church and a plaza where shoppers gather and gossip; wander randomly, and you pass through Roman arches and along crumbling medieval walls.

Comino, which works best as a day trip (ferries leave hourly from Valletta), is even more rustic. While Gozo has better beaches, Comino’s sunsets are spectacular from its western shore.

The small island’s claim to fame is the so-called Blue Lagoon, a limpid pool surrounded by natural rock formations that glows a particularly vivid shade of turquoise. Less famous than its Capri counterpart, the Comino lagoon — once the province of Saracen pirates — is today a destination for kayakers and snorkelers, and a popular boat excursion.

The lagoon also contributes to the overall air of spirituality that Comino connoisseurs prize. Abulafia, who fittingly is remembered as a hermit, is still spoken of by the locals — not something you can say for most medieval scholars.