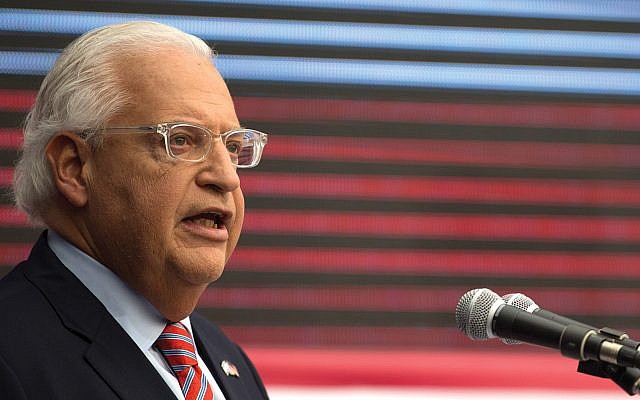 David Friedman, the U.S. ambassador to Israel, speaking at the opening of the U.S. embassy in Jerusalem last May. Friedman’s recent annexation comment touched off a flurry of speculation. Getty Images

Palestinians were already planning angry protests when David Friedman gave his latest interview. Now, they have a new rallying cry.

Rarely has a single news article brought such a swift reaction. But Palestinians claim that America’s ambassador to Jerusalem has crossed a line by saying that Israel “has the right” to retain parts of the West Bank.

“Under certain circumstances,” Friedman told The New York Times, “I think Israel has the right to retain some, but unlikely all, of the West Bank.”

This showed that Friedman is “ambassador for settlements,” claimed Ibrahim Melhem, spokesman for the Palestinian government. The PLO and other Palestinian organizations called for a “popular uprising” on June 25 and 26 when the U.S. is expected to launch its peace plan. PLO official Wasel Abu Yusef said that Palestinians will “voice their rejection of all American policies.”

The Israeli left was also outraged, and Peace Now even called for Friedman to be fired.

Talk of changing the status of the West Bank is always controversial, but coming after an election campaign that saw Benjamin Netanyahu committing to apply Israeli sovereignty over parts of the West Bank, it made particular waves.

Members of the Israeli left threw their hands up in dismay, as the settler-right rubbed their hands in glee. But both sides said the same thing: Friedman is changing U.S. policy, and aligning it with that of Netanyahu.

The right-wing Sovereignty Movement, which has pushed hard to make West Bank annexation a mainstream enough idea for the likes of Netanyahu to be adopting, released a statement saying it was delighted that the U.S. has adopted “a policy that will bring stability, peace … and security.”

Friedman’s stance, said Sovereignty Movement activists, is a “natural” step now that the Trump administration has recognized Jerusalem as capital and moved the embassy there, and accepted Israeli sovereignty over the Golan.

Asked in The Times interview about the possibility of a unilateral Israeli annexation, Friedman didn’t offer a clear answer.

Gilad Erdan, a government minister and Likud politician, praised the idea of annexation and said that the Trump administration’s mindset is “the only one that could bring about change” and convince the Palestinians that boycotts and terror won’t bring them achievements.

Peace Now said Friedman’s words were “extreme and irresponsible,” and called him a “trojan horse of the settler right.” It asked rhetorically: “With friends like the ambassador of America David Friedman, who needs enemies?”

Ofer Cassif, lawmaker for the mostly Arab party Hadash-Ta’al, wrote to Friedman asking him to revoke his comments. “In recent years,” Cassif claimed, “U.S. intervention in the Israeli-Palestinian conflict has only led to a worsening of the situation and prevented a just solution.”

The right’s glee and the left’s outrage rest on the idea that The Times really did get a scoop, and Friedman is outlining a new attitude in Washington. But some longtime experts on Israel-U.S. relations aren’t convinced.

Both sides are “premature” with their reactions, former Israeli ambassador to the U.S. Zalman Shoval told me on Tuesday, the morning after he happened to have chatted face-to-face with Friedman. “I don’t really think there is something new here in substance,” he said.

Shoval, who has advised Netanyahu on foreign relations at various points during his premiership, said the idea that Israel will retain parts of the West Bank long term isn’t controversial, as most peace plans involve Israel keeping hold of some settlements.

What’s more, said Shoval, the White House has explicitly accepted this idea in the past. In 2004, George W. Bush wrote to then-Israeli Prime Minister Ariel Sharon that it is “unrealistic” to expect that a peace deal will remove Israel from all areas it gained in the Six-Day War.

Shoval said: “Since 2004 and the exchange of letters between Bush and Sharon, it was more or less clear to Israelis and the international community that the so-called large settlement blocs will be an integral part of the State of Israel in the future.” He also recalled attending a meeting with then-President Bill Clinton where he showed flexibility on America’s opposition to all building over the Green Line.

Hagit Ofran of Peace Now rejects all efforts to play down Friedman’s comments. “All talks, official and unofficial since Camp David of 2000, have used the 1967 borders as the basis,” she told me in an interview, suggesting that the Trump administration is now changing this paradigm.

Ofran said that past administrations saw the West Bank as a bargaining chip in a peace agreement that would give Palestinians statehood. By contrast, Ofran noted that Friedman spoke about Israel having a “right” to parts of the West Bank — he didn’t merely say an option to negotiate to this end — and said that the context of Netanyahu’s sovereignty push suggests that he was giving a green light to Israeli annexation.

Shoval argued that Friedman “left it open” regarding whether he saw Israel controlling parts of the West Bank long-term as the result of a negotiated deal or annexation. But even if he meant the latter, claimed Shoval, this isn’t as controversial as people think.

This is because past U.S. administrations, while never talking publicly of Israeli annexation, “definitely” saw it as a possibility if the Palestinians didn’t reach a peace deal with Israel. Shoval said of Friedman’s stance: “I don’t think it’s a departure, but I think it’ putting stronger emphasis on things that were implied in the past.”