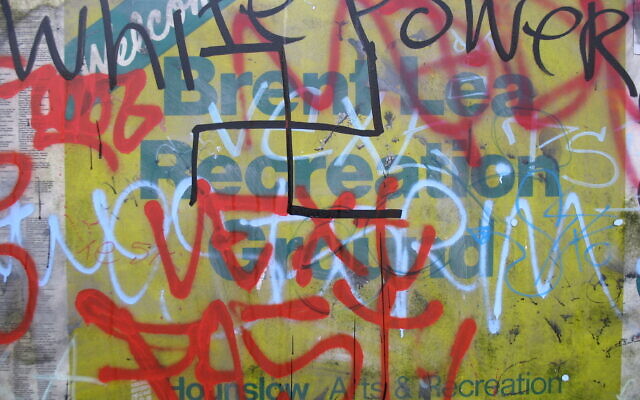 A big part of my job is reporting antisemitism – from the filth spilling out of the sewers of white supremacy, to the never-ending debate over when anti-Israel activity ends and Jew-hatred begins, to the isolated graffiti scrawled on a synagogue door.

It’s a job that comes with some responsibility, but frankly one that can be abused. Does reporting on antisemitism only amplify it? Like the “if it bleeds it leads” journalism of local TV newscasts, does our reporting end up suggesting the world is more hostile to Jews than it actually is?

I fret especially over the “one-offs” – the kind of isolated incidents that might be upsetting to the local victims but don’t necessarily point to a wider wave of antisemitism. By treating, say, a swastika scrawled on a highway overpass as newsworthy, do news outlets end up empowering a 16-year-old with a Sharpie? Might an article about the incident inspire a copycat?

Authors Whitney Phillips and Ryan M. Milner take on these dilemmas in  a new book, “You Are Here: A Field Guide for Navigating Polarized Speech, Conspiracy Theories, and Our Polluted Media Landscape” (MIT Press). The book draws in part on Phillips’ 2018 study, “The Oxygen of Amplification.” Using case studies, she contended then that journalists accidentally propagated extremist ideology out of a well-intentioned impulse to expose manipulators and trolls. The 2018 paper is a catalogue of Trump-era hate-mongering: the rise of the alt-right here and the far-right in Europe; the ascendancy of social media trolls and social media sites, like 4Chan and parts of Reddit and Twitter, where they lurk.

Reporting on these trends, even critically, also gives the subjects a wider audience. The journalists Phillips spoke to tell themselves that it is better to turn over the rock and expose what’s underneath. But they also worry that by, say, amplifying a fringe politician’s musings about Jewish space lasers, they inject a new antisemitic idea into the public bloodstream.

“The basic understanding that one’s reporting could end up benefiting extremists, or otherwise contribute to the spread of misinformation, was deeply concerning for almost every person I spoke to,” she writes.

Phillips cites an example from 2016, when Time magazine reporter Joel Stein shared his email exchange with avowed neo-Nazi Andrew Auernheimer, which ended when Auernheimer declared that Jews deserved to be murdered.

“Even if a particular article takes an overall condemnatory tone toward its subject, as does Stein’s, the manipulators’ messages are still amplified to a national or global audience, and the manipulators themselves still get exactly what they want”— that is, wider attention and greater recruitment power.

We should put antisemitism in perspective, recognizing its dangers even as we acknowledge the relative security and safety most Jews enjoy today.

As for the “isolated” incident, Phillips is less helpful. Sometimes an event that seems isolated does fit a wider pattern which isn’t at first apparent. When identifiably Orthodox Jews were reporting attacks in late 2019, it wasn’t clear whether these were random muggings or part of a larger trend of harassment. The community’s sense of vulnerability only became apparent when the attacks increased, and the media, along with law enforcement and the watchdog groups, began connecting the dots. Should media downplay such attacks before a clear pattern emerges? What’s the tipping point?

Nonetheless, “The Oxygen of Amplification” is a helpful guidebook for a treacherous landscape. Journalists should be out there exposing and challenging the trolls. We should be careful about providing microphones to those who are already the loudest voices in the room. We should put antisemitism in perspective, recognizing its dangers even as we acknowledge the relative security and safety most Jews enjoy today.

Those are a lot of “shoulds,” and they can even cancel one another out, like a game of rock, paper, scissors. The best we can do as journalists is to weigh our decisions carefully. In a section on “tips for establishing newsworthiness,” Phillips provides advice from April Glaser, technology writer at Slate. “When weighing the question of newsworthiness, she considers whether the reporting will have a positive social benefit, if it will open up a new conversation, and/or if it will add weight and exemplars to an existing conversation,” writes Phillips. “If the answer to these questions is yes, the story is likely worth reporting.”