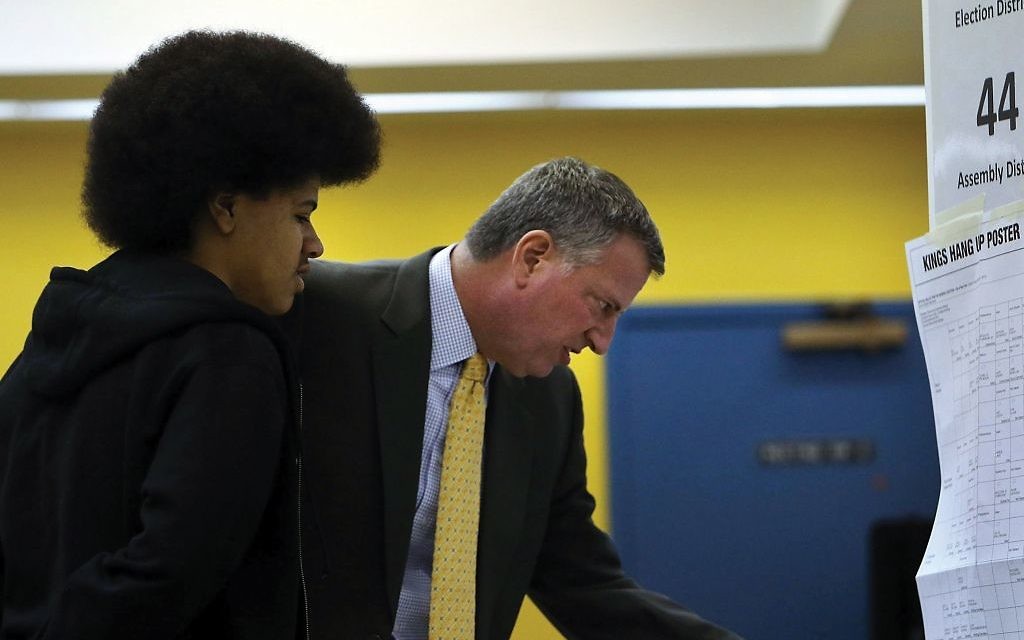 With the landslide election of Bill de Blasio at the top of an all-Democratic slate of citywide officials, with a wide mandate to pursue his agenda, New York seems poised to enter a new era of progressive politics after two decades of moderate Republican administrations.

De Blasio trounced Republican Joseph Lhota by a margin that may come close to 50 points when results are official. Voter turnout was at a record low, however, estimated at just 24 percent of registered voters, a likely consequence of polls showing de Blasio consistently in the lead since September.

De Blasio’s victory would cap off a brilliant campaign that precisely measured the city’s mood 12 years after the trauma of 9/11 and five years after the onset of the economic collapse, as crime continues to plummet while an income gap widens.

De Blasio made the struggling lower and middle classes the centerpiece of his campaign, while Lhota adopted Mayor Michael Bloomberg’s argument that maintaining and increasing the upper class is good for the whole city.

“The city is reverting back to form,” said Hank Sheinkopf, the veteran political strategist. “It has always been a liberal city. De Blasio was on message by finding out what people cared about at that particular time and creating an emotional response.

“In this case it was stop-and-frisk, the income gap and affordable housing.”

Lhota tried to paint de Blasio as a figure to the left of Che Guevara — particularly after reports emerged about the Democrat’s long-ago fascination with Nicaragua’s Sandinista government — with an agenda that would reverse the city’s gains.

But voters balked at the depiction, evidently seeing the modern-day de Blasio — as public advocate and a former City Councilman — more of a pragmatist than a left-wing ideologue.

De Blasio, like other candidates this year, consistently attached the word progressive to his campaign this year.

Sheinkopf sees it as a new buzzword. “Lots of people are putting the progressive label on themselves because they think it’s a better word than liberal,” says Sheinkopf.

But it’s definition is unclear and subject to interpretation. “It’s overused,” said Sheinkopf.

Ruth Messinger, the former Manhattan borough president and 1997 Democratic mayoral candidate, said the term was “mostly in the eye of the beholder,” and has generic appeal, but that in today’s New York lexicon it pertains mostly to an agenda that seeks to address those whose lives have not been improved under the current administration.

“I think by whatever definition, he’s a progressive,” she said of de Blasio. “When when you’re running in an election you pick issues you think wil sell, but then when you become mayor yoyu see that you can only do what you have money for. But you really don’t hear people running around saying ‘I’m not progressive, except maybe Rand Paul.”

Civil rights lawyer Norman Siegel, who ran against de Blasio for public advocate in 2009 but supported his mayoral campaign this year, said progressivism “is a new religion. It’s a shorthand for saying that you’re of a particular generation with a particular set of ideas. It’s about issues of justice and equality and fairness and [opposing] discrimination based on gender, sexual orientation, religion or age.”

Rabbi Steve Gutow, CEO of the Jewish Council for Public Affairs and a Manhattan resident said he defined a progressive agenda in New York as “looking athe situation as it is today and seeing disparities between those who have and those who have not”. But he added “I think we have a secondary job and that needs to be finding out what resources we can marshall to be successful in whatever areas of social justice we position ourselves.”

He said the election indicated that most New Yorkers “don’t want to move away from safety but feel they would like to see more work in terms of alleviating the large number of poor people and hungry people.” De Blasio, he said, “certainly was perceived as responding to the disparity between haves and have nots. Voters perceived him as wanting to make a difference.”

Although population changes such as the increase in Asian Americans surely contributed to de Blasio’s victory, Michael Tobman, a Democratic political strategist, sees the income gap as a more potent factor.

“The most important demographic shift that contributed to de Blasio’s decisive primary and general election victories isn’t about race or ethnicity or religion – it’s that New York City is a far wealthier city now than it was in 2001,” said Tobman of the firm Hudson TG.

“The ‘tale of two cities’ narrative resonated so well because of Bloomberg’s successes as mayor, not opposite it. Voters, and people generally, compartmentalize their thinking. We can now afford what de Blasio is offering, and we feel better about ourselves and our neighbors because of it.”

Siegel said that while he welcomed the focus on police reform and equality, some of de Blasio’s stated positions during the campaign diverted from what he considers a progressive agenda, particularly regarding matters of faith and religion, where de Blasio seemed to be “fudging the separation of church and state a little bit.”

De Blasio supported adding more days off on the school calendar for Muslim holidays as well as allowing religious services on public school property, and he has been critical of the city’s attempt to discourage a controversial, risky circumcision procedure; he has said that he would try to find a better way in close consultation with Orthodox leaders.

He is also open to funding school safety officers in religious schools.

Lhota shares those views, which show a pragmatic view that Jews and Muslims, as well as Catholics, are potent voting blocs to be alienated at a candidate’s peril.

“Bill de Blasio is a thoughtful person and a very good campaigner but more important, he’s a lucky guy,” said Siegel. “Joe Lhota was very unimpressive and couldn’t charm people or persuade them he was an alternative.”

But he said the best progressive credential de Blasio wields is his evident belief that virtually all problems are solvable through dialogue. “He is able to relate to people of all kinds and deeply believes if you get everybody in a room to sit down you can work out things in a most pragmatic way,” said Siegel.

Siegel added that de Blasio’s progressive values will be put to an early test in his first 100 days in office as he comes to grips with his promises and the realization that it will cost a lot of money to keep them.

“Many of us in the civil rights and civil liberties community will do the best we can to make sure that Bill de Blasio follows through on some if not all the promises he made during the campaign.” Siegel said.

“When I ran for public advocate, people kept saying ‘tell them anything they want to hear.’ “

Rabbi Joseph Potasnik, executive vice president of the New York Board of Rabbis, said the city’s embrace of de Blasio doesn’t necessarily mean a collective left turn, but a sense that he listens to all sides.

“I think we’ve seen those who are serving in office try to find a centrist position,” said the rabbi, who leads Congregation Mount Sinai in Brooklyn Heights.

“You appeal to your base but that becomes enlarged once you’re in office.”

In the weeks since de Blasio emerged as the upset winner of the Democratic primary, far ahead of the initial frontrunner, Christine Quinn, and with enough support to avoid a runoff, he employed a Rose Garden-style campaign.

While details of his younger life fell under consistent scrutiny during the general election —from his role in the Dinkins administration and during the 1991 Crown Heights riots to his apparent earlier socialist leanings — de Blasio and his advisers skillfully avoided the one thing that derails a speeding campaign: a gaffe.

Lhota, on the other hand, already had such a gaffe on record from his primary race, when he told a Staten Island group sympathetic to the Tea Party, “My philosophical issues are very close to yours in many, many ways,” according to the Staten Island Advance.

Never mind that Lhota had denounced the larger Tea Party movement. The remark was similar to Mitt Romney’s infamous “47 percent” remark, also made in a moment of candor, that severely hurt the 2012 Republican presidential nominee’s chances of gaining crossover support.

It became de Blasio’s signature line of attack against Lhota: linking him to the most conservative elements of the Republican Party and its “playbook.” Lhota seemed to acknowledge it was working when he released an ad showing that his positions and de Blasio’s on key issues were largely similar.

Sheinkopf says that given the overwhelming registration majority that Democrats enjoy (about 6 to 1) and the lack of a crisis that helped Rudy Giuliani and Michael Bloomberg — first high crime, then 9/11 and later the fiscal collapse — the cards were stacked against almost any Republican this year.

Giuliani seemed to acknowledge this while campaigning with Lhota Monday night.

Another factor: resentment against the wealthy, as typified by the popular, though ultimately pointless Occupy Wall Street movement of late 2011. De Blasio put on a Robin Hood hat and vowed to take some money from the rich and pay for free kindergarten.

“There is no question there was an element of populism in this campaign,” Sheinkopf said. “People who are concerned about [housing, stop-and-frisk and the income gap] didn’t have to be poor to feel that way. People who are well-off also felt that way.”