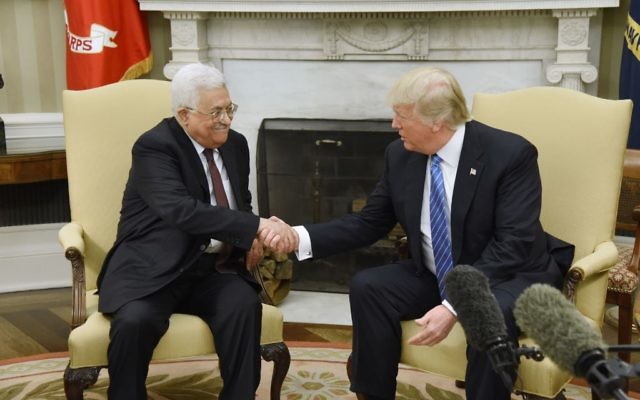 U.S President Donald Trump meets with President Mahmoud Abbas of the Palestinian Authority in the Oval Office of the White House on May 3, 2017 in Washington, DC. Getty Images

Tel Aviv — It was several weeks after President Donald Trump’s election before a channel of communication was established with Palestinian President Mahmoud Abbas.

Palestinian officials complained that “there are [Israeli] settlers in the White House,” a reference to Ambassador David Friedman, and that Trump’s speeches put him to the right of Israeli Prime Minister Benjamin Netanyahu. They feared that Trump would make good on a campaign promise to move the U.S. embassy from Tel Aviv to Jerusalem.

But despite the initial disconnect and Trump’s seeming retreat from endorsing a two-state solution after he met Netanyahu in February, Abbas and his team have changed their tune about the new president. Now, as Abbas arrives in Washington this week to meet with Trump, they are giving the American president a vote of confidence that he will be able to restart peace talks for the first time in three years and make progress on a historic deal.

“Initially, they seemed an odd couple,” said Scott Lasensky, a former senior adviser on Israel and the Middle East in the Obama administration. “At the time of the inauguration, one would have expected that they would be on opposite sides of all the issues that divide Israelis and Palestinians, and very quickly they’ve gotten off to a positive start. The question is, why?”

From Abbas’ standpoint, the mere photo op at the White House alongside the new president is a win. At a time when the aging and unpopular Palestinian president is grappling with a crop of would-be successors within his Fatah Party, a campaign by the Israeli government to delegitimize the Palestinian Authority as a slush fund for terrorists, and the ongoing rivalry with Hamas, the meeting with Trump will serve as a reminder that he still matters.

“Trump can give Abbas relevance at a time when he desperately needs it,” said Dennis Ross, a former U.S. diplomat who specialized in Israeli-Arab mediation efforts, during a conference call with reporters. “He wants to show that he remains a player.”

Lasensky added other factors: Despite Trump’s cozy relations with Netanyahu since his election, the Palestinians remain dependent on the U.S. for economic and security aid. Indeed, in the week before the meeting, the Palestinians sent Abbas’ top economic adviser and top security chief to Washington to prepare.

By embracing the president, Abbas is also falling into line with Arab leaders from Jordan and Egypt who have already visited Trump. And warming up to the president helps Abbas compete with Netanyahu.

The president — who talks of brokering the “ultimate” deal — reached out to the Palestinian president with a phone call in March and an invitation to the White House. He then dispatched an envoy — New Jersey real estate lawyer Jason Greenblatt — to the West Bank to prepare for the visit.

Since then, Palestinian officials are taking pains to put a positive spin on public statements by the new administration about the peace process. They have savored Trump’s remarks about pushing for a solution to the Israeli-Palestinian conflict and his criticism of expanding settlements.

“Trump is smart; he is sending mixed messages in every direction. It’s not a mistake. It’s a strategy,” said a Palestinian negotiating official who was not authorized to speak publicly about the president. “I don’t think the Israelis are happy.”

At the same time, the Palestinian official acknowledged that “no one can claim that we have had a substantive discussion with the Americans yet. They haven’t said the words ‘two-state solution.’”

The official said Greenblatt had made a genuine effort to understand the Palestinian perspective on the conflict with Israel, but noted Trump officials seem like they are trying to reinvent the wheel on the peace talks. “It’s like they are asking the same questions we were dealing with 25 years ago,” the official said.

Nonetheless, Abbas will engage with Trump. Trump “is basically saying that there needs to be a solution. Netanyahu doesn’t want a solution,” the official said.

The new administration is likely to pressure Abbas to cut out the PA’s public support for Palestinians in Israeli jails convicted of terrorist acts against Israel. Trump has also echoed Israeli complaints that the PA encourages incitement against Israelis.

Lasensky said the new administration needs to be mindful not to cast aside the years of diplomacy on the Palestinian-Israeli conflict. Uneven transitions between administrations can hurt the process, he said. 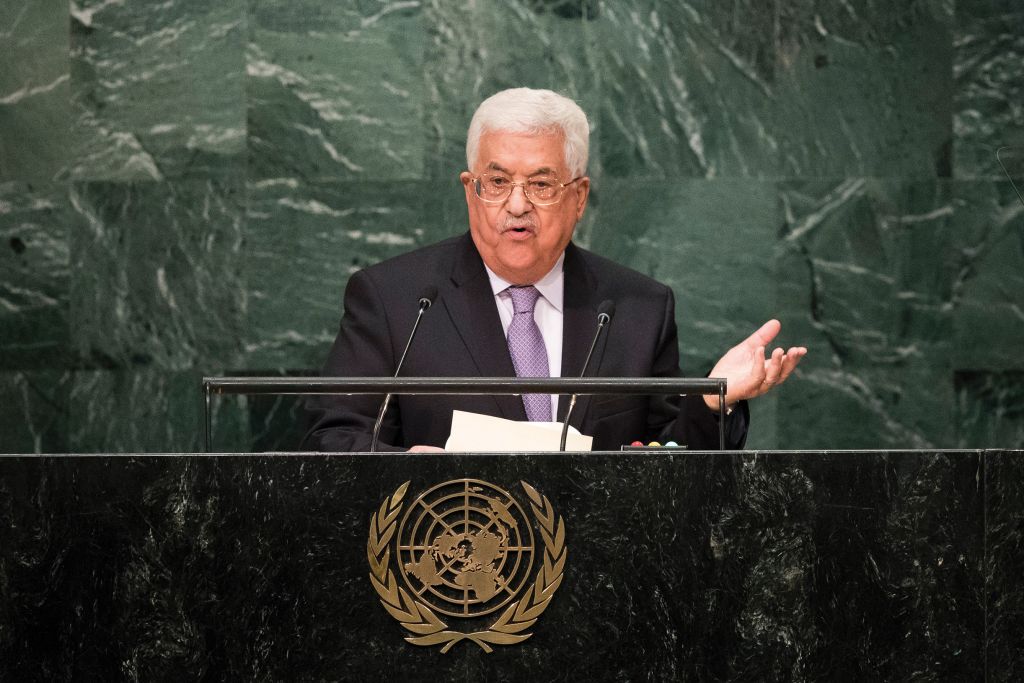 Abbas speaking at the UN: He and Trump seem to be on better footing these days.

“What worries me is that because Trump has shown so much disdain for anything by Obama, he’s going to go off on a foolhardy path that ignores lessons learned by past presidents,” he said. “With Israelis and Palestinians, history does not begin on Inauguration Day.”

The meeting at the White House comes at a time when Abbas is trying to show he’s getting tough on Hamas, by turning the financial screws on Gaza’s Islamist rulers.

In an unprecedented sanction since Hamas took control of Gaza nearly 10 years ago, the PA informed Israel last week that it will no longer foot the bill for the electricity that Israeli power plants supply to the Gaza Strip. Several weeks before, the PA reduced the salaries that it has continued to pay for tens of thousands former employees in the Gaza Strip. Palestinian officials said they won’t restore the financial assistance unless Hamas gives them some authority for running Gaza.

“He wanted to show some decisiveness when he meets with Trump,” said Mkhaimar Abusada, a professor of political science at Al Azhar University in the Gaza Strip. “He has been accused of being weak and not controlling Gaza. He is trying to say to Israelis and the U.S. that ‘I’m doing my best’ and “I can be a strong partner.’”

However, for all of the talk of “historic” and “ultimate” agreements, the geopolitical fundamentals that helped stymie the peace process under the Obama administration haven’t changed: a large group in Israel’s right-wing government coalition remains opposed to a Palestinian state, Abbas remains too weak domestically to win support for painful peace compromises and Arab states are preoccupied with more pressing regional crises.

Moreover, gaps between Israeli and Palestinian leaders as well as between their respective publics have never been deeper, said Ross. A one-time meeting or summit is likely to further undermine the credibility of peace process.

“I don’t think we’ve ever been at a lower point — the level of disbelief [in the prospect of a comprehensive deal] between the two sides has never been greater … the absence of even a sense of possibility among the two publics is really pretty profound,” Ross told reporters. “We’re not at a point where resolving [the conflict] is in the cards. The question is whether you can break the stalemate and restore the sense of possibility.”