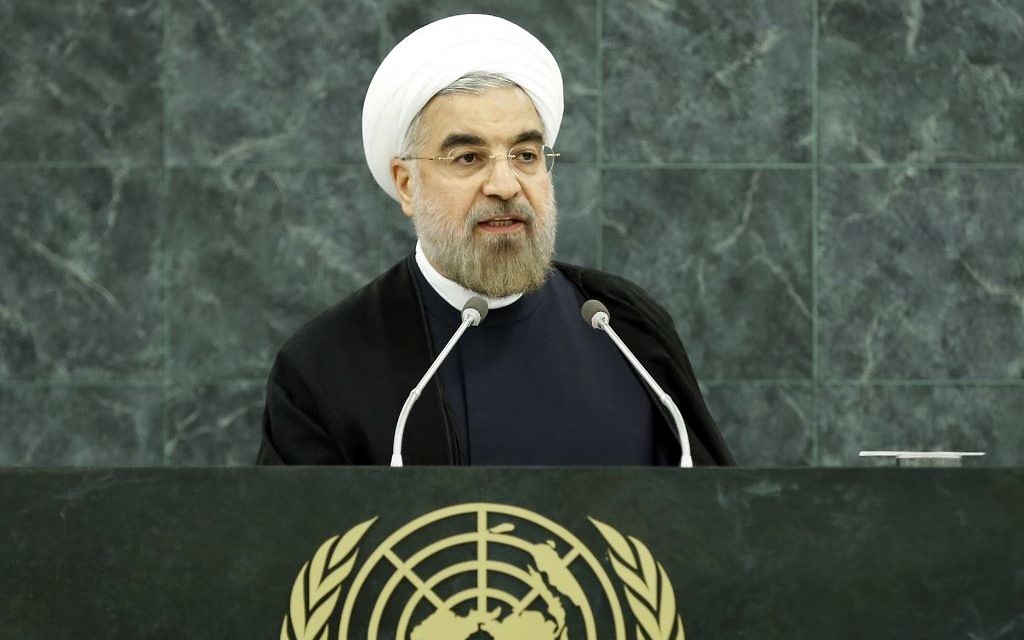 Iranian President Hassan Rouhani called Israel the “only impediment” to a nuclear-free Middle East and said that U.S. support for Israel was the cause of terrorism in the region.

In his speech Monday at the opening session of the U.N. General Assembly, Rouhani also praised the sanctions relief for nuclear restrictions deal reached in July between Iran and six major powers.

“The nuclear deal, which is a brilliant example of ‘victory over war,’ has managed to disburse the clouds of hostility and perhaps even the specter of another war and extensive tensions from the Middle East,” he said. “The deal can and should herald a new era, and lead to positive outcomes regarding the establishment of sustainable peace and stability in the region.

“Today, a new chapter has started in Iran’s relations with the world.”

Still, Rouhani had harsh words for the United States, blaming it for the problems in the region.

“If not for the U.S. military invasion of Afghanistan and Iraq, and its unwarranted support for the inhumane actions of the Zionist regime against the oppressed nation of Palestine, today the terrorists would not have an excuse for the justification of their crimes,” he said.

Rouhani called for a nuclear-free Middle East, saying that the world cannot “allow the Zionist regime to remain the only impediment in the way of realizing this important initiative.”

The Iranian leader addressed the civil wars in Syria and Yemen.

“The gravest and most important threat to the world today is for terrorist organizations to become terrorist states. We consider it unfortunate for national uprisings in our region to be deviated by terrorists and for the destiny of nations to be determined by arms and terror rather than ballot boxes,” he said.

“We propose that the fight against terrorism be incorporated into a binding international document and no country be allowed to use terrorism for the purpose of intervention in the affairs of other countries. We are prepared to assist in the eradication of terrorism and in paving the way for democracy, and ensuring that arms do not dictate the course of event in the region.”

Hundreds of Iranian-American protesters demonstrated in front of the United Nations headquarters in New York during Rouhani’s speech.

Also on Monday, in an address to the General Assembly, Egyptian President Abdel Fattah el-Sisi said that resolving the Palestinian-Israeli conflict would eliminate one of the main “pretexts” for religious radicalism and terrorism. He called for the establishment of a Palestinian state along Israel’s pre-1967 borders, with its capital in eastern Jerusalem.

“Resolving this conflict and empowering the Palestinian people to exercise their right to self-determination and to an independent state within the border of 4th June 1967, with East Jerusalem as its capital, will effectively eliminate one of the most important factors contributing to the region’s instability and one of the most dangerous pretexts used to justify extremism and terrorism,” Sisi said.

“Does President Obama think that he can fight terror and defeat ISIS and achieve peace and stability in the Middle East by continually ignoring the occupation and Israeli settlements in the West Bank and continued aggression against the Al-Aqsa mosque?” Saeb Erekat, the secretary general of the PLO executive committee, asked following the speech.