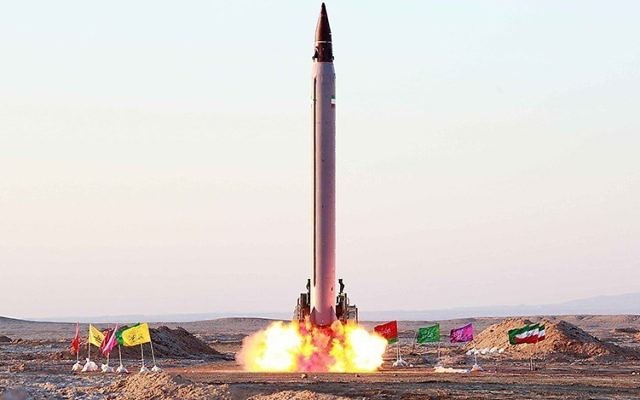 Fears that the Iranian nuclear agreement would pave the way for Iran to develop a missile program that threatens Israel, the U.S. and its allies came to fruition Sunday when Iran fired six missiles aimed at militants in eastern Syria.

“This was a message that it can hit U.S. bases, and it told Arab countries that it can carry out an attack like this,” said Malcolm Hoenlein, executive vice chairman of the Conference of Presidents of Major American Jewish Organizations.

“It was meant for the Saudis and the Americans and not so much for Israel,” he added.

Gen. Amir Ali Hajizadeh of Iran’s Revolutionary Guard boasted that “firing these missiles from 600 or 700 kilometers away [about 400 miles] onto a small building … demonstrates Iran’s capacity and intelligence capabilities” against jihadist groups.

The missile launch is believed to be Iran’s first since April 2001 when it reportedly fired as many as 77 missiles against the anti-Iranian Mujahidin-e Khalq Organization (MEK) after it launched more than a dozen mortar attacks around Tehran.

An analyst of U.S. defense policy and Middle East affairs, Shoshana Bryen, said she is convinced the missile firing was meant to send a message to Israel as well.

“The ostensible reason [Iran gave] for doing it was to pay back for the [ISIS] terrorist attacks in Iran [June 7 that reportedly killed 18], but this is not how one usually reacts,” said Bryen, senior director of the Jewish Policy Center. “There was a second benefit — to demonstrate to Israel that they could do it.”

An article in the Jerusalem Post said it could be argued that Iran’s use of the missiles “makes it more likely that it would use them again.” It added that they “did little more than confirm Iran as an ongoing and relevant threat that must be carefully monitored.”

Israeli Prime Minister Benjamin Netanyahu responded forcefully Monday to the missile strikes, saying: “We follow their actions and we follow their words. I have one message to Iran: Do not threaten Israel.”
In a meeting with senior members of his Likud Party, Netanyahu reportedly assured them that the Israeli “army and our security forces are constantly monitoring the activity of Iran in the region.”

A Likud statement quoted Netanyahu as saying also that Israel is watching Iranian “attempts to establish themselves in Syria and, of course, to transfer advanced weapons to Hezbollah and other operations.”

“Israel is prepared for every development. We are prepared, we have no concerns or worries.” – Avigdor Lieberman

Israeli Defense Minister Avigdor Lieberman appeared dismissive of the Iranian missile strike. He was quoted as saying: “Israel is prepared for every development. We are prepared, we have no concerns or worries.”

The Iranian media said that as many as 360 ISIS fighters had been killed in the attack. But Israeli intelligence sources scoffed at the claim, reportedly saying that six of the seven missiles didn’t hit their target – three even landed in Iraq.

One official reportedly quipped, “Is this the product of a 30-year missile development program? Even Hezbollah can do better.”

Michael Makovsky, a U.S. national security expert and CEO of the Jewish Institute for National Security Affairs, pointed out that the United Nations Security Council essentially gave Iran a license to develop its missile program. He said that after initially adopting a resolution calling on Iran to halt all missile development, the Security Council modified the resolution in 2015 when the Iranian nuclear deal was completed.

“The resolution does not prohibit development but on page 99 calls on Iran not to develop missiles,” he said. “So once the Iran deal was in effect, it [the U.N.] effectively legalized the ballistic missile program.”

The missile strike comes at a time when Congress is in the midst of adopting new sanctions against Iran for its continued ballistic missile program, its abuse of human rights, and its unrelenting support and promotion of global terrorism. The Senate passed the bill — known as the Countering Iran’s Destabilizing Activities Act — last Thursday 98-2; the House is expected to do the same.

But the Senate bill is already being mocked by Iran, which reportedly claimed the missile launch proves “the U.S. Congress’ anti-Iranian bills are worthless.”

The new sanctions bill targets individuals in the Iranian Revolutionary Guard Corp and the entire IRGC.

“It targets anyone who contributes to any part of the missile system program,” said an Iranian expert and senior analyst at a pro-Israel organization who spoke on background. “It puts banks [and any business] on notice that if they are doing anything that touches Iran’s broad ballistic missile program they face sanctions. The legislation says they have to knowingly contribute, but the U.S. Treasury Department expects them to know. Everyone knows that Iran’s industries broadly contribute to its ballistic missile program.”

[The Senate also added an amendment to the bill that would place new sanctions on Russia for its actions in Ukraine and Syria, as well as its alleged interference in last year’s presidential election.]

Once the Iranian nuclear deal begins to expire 10 to 15 years after it was signed in 2015, Iran would be free to resume the development of nuclear weapons — which could then be delivered to its target by long-range ballistic missiles or intercontinental ballistic missiles.

Bryen said intercontinental ballistic missiles have a range of 3,400 miles but that Iran would not need them to reach Tel Aviv, which is 1,500 miles away from Kermanshah, one of the sites from which Iran launched its medium range missiles at Syria. When Iran unveiled last September its medium range missiles — known as the Zolfaghar ballistic missile — it hung a banner on them that said if Israel attacked Iran, Iran would attack Haifa and Tel Aviv.

“Iran’s pursuit of advanced weaponry, its support for international terror groups such as Hezbollah and Hamas, its efforts to subvert and attack its neighbors, and its collusion with the murderous Assad regime in Syria jeopardize global peace and security.”

“It may be that this missile can’t hit Israel, but it may have others that can,” said the Iranian expert, who added that Iran has boasted of possessing such missiles.

“Iran’s pursuit of advanced weaponry, its support for international terror groups such as Hezbollah and Hamas, its efforts to subvert and attack its neighbors, and its collusion with the murderous Assad regime in Syria jeopardize global peace and security,” said a statement from Jason Isaacson, the AJC’s associate executive director for policy.

Evelyn Sommer, chair of the WJC North America, pointed out in a statement that Iran “remains the greatest long-term threat to Israel and to America’s interests in the Middle East. … This vote sends a clear and powerful message that Iran that it will face severe consequences if it does not end its aggression and dangerous behavior in the region.”

But the IRGC was quoted as saying the missile strikes were “just a warning to deter any further action by the terrorists.” And in a tweet, former senior military officer Gen. Mohsen Rezai wrote, “The bigger slap is yet to come.”

Makovsky said such actions should prompt the U.S. to do more than impose sanctions.

“I’d like to see the U.S. shoot them [Iranian missiles] down because one of the biggest threats to the homeland is rogue states with nuclear armed ballistic missiles,” he told The Jewish Week. “Sanctions are welcomed, but they are not strong enough. A stronger message would be to shoot them down because we can’t tolerate their development.”