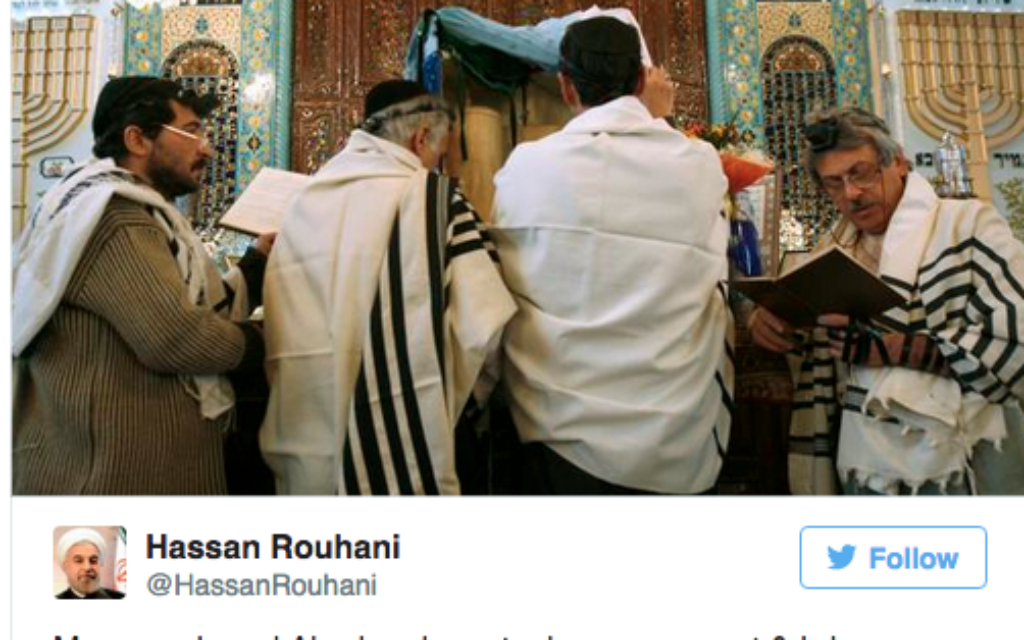 The greeting from Hassan Rouhani was sent from his official Twitter account on Sunday before the start of the holiday.

“May our shared Abrahamic roots deepen respect & bring peace & mutual understanding. L’Shanah Tovah.#RoshHashanah,” the tweet said. A Reuters photo included with the message shows Jews praying in 2006 at a synagogue in Tehran.

The message, which appears directed at the international community, reportedly did not appear on Rouhani’s Farsi-language Twitter account. It came days before the U.S. Congress is set to ratify the Iran nuclear deal.

Russian President Vladimir Putin also sent Rosh Hashanah greetings to the Jews of his country via an official letter from the Kremlin to one of Russia’s chief rabbis, Berel Lazar. The letter also was published in Russian media.

“For hundreds of years Jewish values were steeped in lofty purposes — the unification of people, to strengthen belief and mutual understanding,” Putin wrote. “The religious Jewish organizations of Russia adhere to this ancient tradition, working tirelessly to increase peace in the community, to better the relations between different people, to develop fruitful debate with the other traditional religions, while fiercely confronting all manifestations of anti-Semitism and hatred of strangers. The Jewish organizations are very active in charity and education — all in the public interest. I wish Russian Jews a happy and sweet year, good health, happiness and prosperity.”